The Cybermen identify the Doctor and decide to secure the freighter. Scott wants to go & search for the Doctor. The Doctor & Adric are taken to the bridge for interrogation as the Cyberleader's personal guard is activated and the bridge notices a power surge from the hold which the Tardis also detects. Cybermen come to life tearing off their plastic covering. The Doctor's story about a bomb isn't believed by the captain. The size of the power loss is huge compared to the smaller ones seen before. The Freighter's crew are armed as more power drains are detected. Lt Scott takes his troopers and Tegan to find the Doctor, leaving a communicator with Nyssa & Kyle in the Tardis. Ringway has the stairs to the bridge barricaded. The intruders show up on the monitor and the Doctor identifies them as Cybermen. They easily penetrate the barricade and prepare to take the bridge. Ringway holds the command crew at gunpoint to prevent them resisting the Cybermen. Adric realises his badge for mathematical excellence has a gold edge, which can harm Cybermen. This attracts Ringway's attention allowing him to be overcome and the bridge sealed against the advancing Cybermen. The Captain realises that each of her 15,000 silos contains Cybermen. The troopers attack two Cybermen killing one and seizing it's gun but the other injured one escapes. The Cybermen use a thermal lance to cut through one of the doors but the Doctor uses the ship's anti matter power source to stabilise the door trapping an entering Cyberman. The wounded Cyberman finds it's leader and believing that there is more resistance he orders reinforcements activated. The Cybermen blow open the other door to the bridge and storm in, killing Ringway for betraying them. The Cyberleader tells the Doctor he will destroy Earth. All over the ship more Cybermen emerge. A scared Tegan is separated from Scott & the Troopers. The is horrified as he watches the huge number of Cybermen striding through the hold. 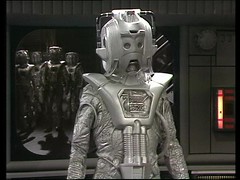 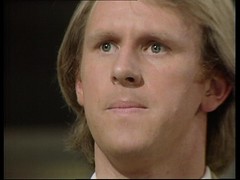 Oh how good is that? Proper base under siege stuff with Cybermen everywhere by the end of the episode. Doctor Who gets flack for seemingly only ever having three of any monster but there's at least eight Cybermen in the shot of them walking towards the bridge, and then the shot at the end uses visual trickery to multiply the Cybermen out several times. 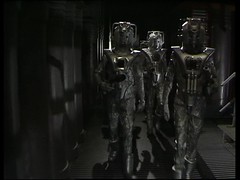 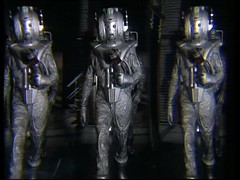 My first memory of Who was of the Cybermen bursting out of the walls on the space freighter.

It made a life-long impression! Thinking about it, Doctor Who is the only hobby that I have consistently maintained man and boy and as far back as I can recall (Star Trek, Transformers, Douglas Adams' work, and Marvel Comics come close but all have axed and waned in interest level and have had periods where I didn't bother at all). The Earthshock moment is one of my earliest memories! 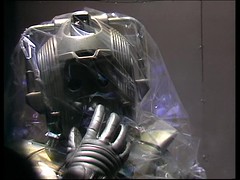 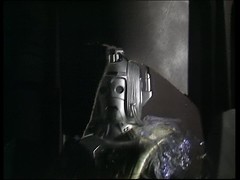 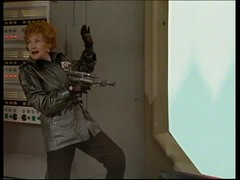 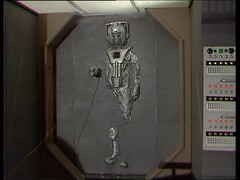 We get our first proper look at the Cybermen's weapons here: I can remember being fascinated by them as they didn't have an obvious handle for the Cybermen to hold. The effect they produce is superb: a circular green glow round the barrel end when fired. It looks fab and works well, plus is a good contrast to the pink and white beams from the trooper's guns. The green glow effect will be used for the next three stories until the Cybermen's minor redesign in Silver Nemesis when they're replaced by firework firing guns that I'm going to have a lot to say about when they turn up. These are fab, the replacements are rubbish. 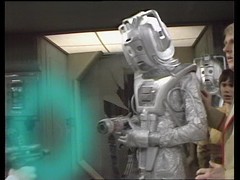 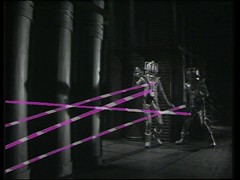 More Cyber faves in this episode:

Cybermen in "suspended animation" storage ? Tomb of the Cybermen & The Invasion.

BRIGGS: You traitor!
DOCTOR: It's the Cybermen's way.
BRIGGS: They must have paid you a lot for this.
DOCTOR: I bet it isn't in gold.
RINGWAY: Shut up!
DOCTOR: Cybermen are rather allergic to the stuff. Brings them out in a cold sweat.
ADRIC: Why?
DOCTOR: It clogs up their chest units. Suffocates them, doesn't it.
RINGWAY: Just keep talking, Doctor. When the time comes, killing you is going to be a joy.
BRIGGS: Where do these Cybermen come from?
DOCTOR: Originally Mondas, but that was destroyed. You know, I'm surprised they didn't mention me.
RINGWAY: Perhaps you overestimate your importance.
DOCTOR: Oh, I doubt it. Especially as I confined them to a frozen tomb on Telos. Didn't they mention that either? Oh well, they have been forgetful.
RINGWAY: What's that?
ADRIC: A badge.
RINGWAY: I can see it's a badge. What's it made of?
ADRIC: I don't know.
RINGWAY: It's gold.
ADRIC: What? Gold? Oh, only the edge. It couldn't do any harm.
RINGWAY: Trying to hide it from me, were you?

Allergy to gold? Revenge of the Cybermen. In fact is this the first time a Cyber weakness has made it to a second story!

As we'll see, that's another Chekov's Gun moment there!

He might be working for them but the Cybermen don't give Ringway much of a chance do they? Automatically leaping to the conclusion he gave them away and offing him as soon as possible

LEADER: He deceived us.
DOCTOR: You never change. Always the perfect guests.

They already know the Doctor's aboard so why doesn't it occur to them that it might be some more of his friends causing the problems. There again Ringway's life expectancy probably wasn't huge anyway after they took control!

With Vance & Carson offed at the end of the last episode we get to meet, albeit rather briefly, some new crewmembers this episode:

Val McCrimmon makes the first of her two onscreen appearances in Doctor Who as the female crew member. She'll play a female passenger in the next story Time Flight. She had been the Assistant Floor Manager on Nightmare of Eden, Shada, The Leisure Hive, Warrior's Gate, Logopolis, Four to Doomsday, Kinda & Black Orchid, a role she'd go on to fill on Enlightenment, Resurrection of the Daleks, Paradise Towers & Remembrance of the Daleks. She can also be seen in the Porridge spin off Going Straight as a Shop Assistant in Going Off the Rails. 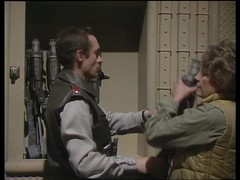 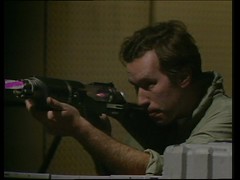 I think the other crew member who survives the battle on the stairs is David Melbourne who had been a Gond in the Krotons, a British Soldier & Resistance Man in The War Games, a Regular Soldier in Spearhead from Space, a UNIT Soldier in Silurians, a UNIT Guard in Day of the Daleks, a UNIT soldier in The Three Doctors, an extra in robot, and a Galifreyan in Invasion of Time. In Blake's 7 he was a Technician in Dawn of the Gods while in Doomwatch he was a Man in Flood and in Moonbase 3 he was a Technician in View of a Dead Planet and Castor and Pollux. In Monty Python's Flying Circus he was a Milkman in Spam and a Soldier at Award Ceremony in It's a Living while in Fawlty Towers he was a Hotel Guest in Communication Problems.

Red haired crew member might be Tim Goodings, who was a member of the Pangol Army in Leisure Hive and a Citizen in Full Circle: I can find a similar looking red haired citizen in my screen caps of Full Circle. 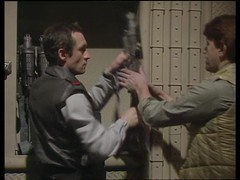 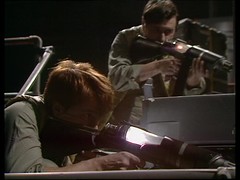 Which means the crew member behind him is John Towns, who I can't find another Doctor Who for or find on IMDB.

So there's 4 unnamed crewman here, plus the deceased Vance & Carson which makes six. Plus there's the three officers on the bridge: Captain Briggs, Ringway and Berger. Nine.

LEADER: There is still resistance.
CYBERMAN: According to the Earthling, there were only ten crew members. They have all been accounted for.

So who's the tenth? I had thought it might be accounted for by the missing crew man in episode 2 except....

RINGWAY: There was no mention of the missing crewmembers?
BERGER: Mister Ringway was concerned that might be the reason for you being delayed.
BRIGGS: Oh, panicking again, was he? No, no mention, Mister Ringway.
RINGWAY: I just happen to think that the disappearance of three crewmembers' rather important, that's all.

That would then make 12, or 9 without the officers. Either way the Cyberman's numbers don't quite add up!

We covered Peter Gates-Fleming and Jeff Wayne when they briefly appeared in the scene at end of episode one which was reprised in episode 2.

The Cyberman with the most Doctor Who form is Steve Ismay who had been a BBC3 TV Crewmember in The Dæmons, a Guerilla & Stills Cameraman in Day of the Daleks, Sea Devil in The Sea Devils, Varan's Bodyguard in The Mutants a Presidential Guard in Frontier in Space and a Security Guard in The Green Death. He's in every story in season 10 playing a UNIT Soldier in The Time Warrior, an Army Soldier in Invasion of the Dinosaurs, an Exxilon & Exxilon Zombie in Death to the Daleks, a Guard in The Monster of Peladon and a Metebelis 3 Guard in Planet of the Spiders. He then plays a Guard in The Deadly Assassin, a Leviathan Guard in Ribos Operation, a Gracht Guard & one of Zadek's Guards in The Androids of Tara, would have been a "Space Monster" in Shada, possibly a Cyberman, then plays a Citizen in Full Circle. He returns as a Security Guard in Time Flight. He had been a Man in the Doomwatch episode The Islanders & Flood, and then appears in The Sweeney as a Policeman in Cover Story, a Driver in Golden Boy and a Villain in Stoppo Driver. In Porridge he played a Prison Warden in A Night In and a Gardener in Happy Release while in The Tomorrow People he was in a Vesh Rebel in Worlds Away and an SIS Sergeant in The Dirtiest Business. In Blake's 7 he plays a Scavenger in Deliverance, a Guard in Dawn of the Gods, a Convict in Moloch and a Hommik in Power. 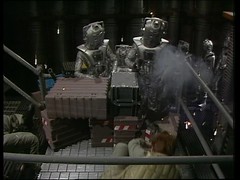 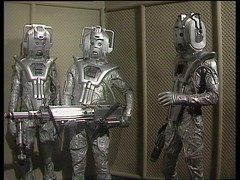 Also there is regular extra in a monster costume Graham Cole who'd previously been in The Leisure Hive as a Zero Gravity Squash Player, Full Circle as a Marshman & Keeper of Traken as the Melkur, Kinda as a Kinda tribesman and would have been in Shada as a young Think Tank Scientist He'll return in Time-Flight as Melkur, The Five Doctors as a Cyberman, Resurrection of the Daleks as a Crewmember and The Twin Dilemma as a Jacondan. He was also in Blake's 7 as one of Gerren's Associates in Games and a Federation Trooper in Blake before becoming famous as PC Tony Stamp in The Bill.

Also there is Norman Bradley who'd been a Skonnan Guard in Horns of Nimon, a Young Scientist in Shada and a Holiday Maker in Leisure Hive He's back as a Guard in The Five Doctors 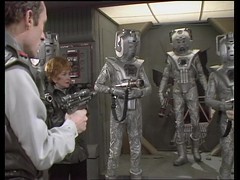 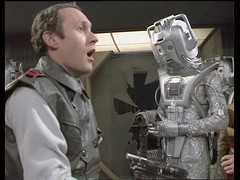 David Bache is making his Doctor Who debut. He returns as a Guard in Revelation of the Daleks and a Timelord in all 14 episodes of Trial of a Timelord. The DWAS Production file says he's a Crimson Timelord in Terror of the Vervoids & Ultimate Foe so it's likely he's wearing the same colours in Mysterious Planet & Mindwarp.

IMDB thinks Marc Sinclair is a Cyberman but the DWAS Production file says no!

We finally get a decent look at Trooper Brooks, played by Steve Whyment, who's got dark curly hair and is taller than Austin, played by Nikki Dunsford and Marshall, Jonathan Evans. 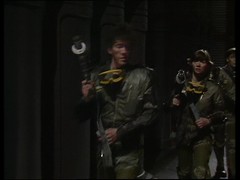 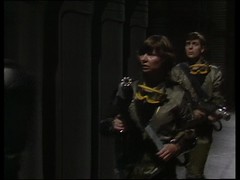 Join us tomorrow for the finale and the real shock in Earthshock!