"Devious to the last, Doctor!"

The part of the Xeraphin that is Professor Hayter projects himself into the Tardis control room taking it to the sarcophagus chamber to rescue The Doctor, Nyssa & Tegan. The Doctor moves the Tardis outside the chamber and dispatches it with Nyssa & the Concorde crew to prepare the aircraft for take off. He and Tegan attempt to recover the pieces of the Tardis the Master has stolen but discover the Master has gutted the Kalid's control room. The Master discovers he cannot leave this time period because he stole the wrong component from the Doctor's Tardis and bargains the lives of the original Concorde's crew & passengers for the correct circuits. The Doctor cobbles together a replacement using it to get the Tardis and Concorde back to Heathrow where the Master's Tardis appears and is deflected into the time vortex by the Doctor's toward the present day planet of Xeraphas. In some confusion with policemen the Doctor is forced to make a quick exit in the Tardis resulting in Tegan being left behind. 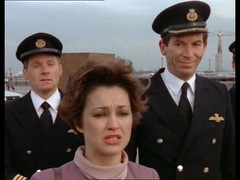 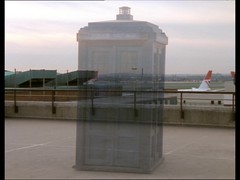 Tegan being left behind is quite a clever little touch which got the series a few column inches in print as people threw their arms up at another companion vanishing so soon after Adric's Death. As we'll see that may be another slight bit of misdirection....

I missed the first few minutes of this on the original broadcast and it didn't make sense. I've watched it all the way through now and it still doesn't. I'll accept that maybe the Xeraphin are powerful enough to be able to project Hayter into the Tardis but to suddenly control it with that much precision?

And why have a projection of Hayter? His appearance here, albeit mute, would have surely caused him to be paid a fee for the episode and as one of the guest stars that'll be a penny or two. Thought maybe that does explain something later on.... 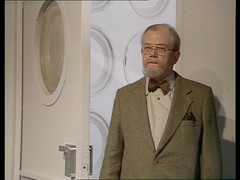 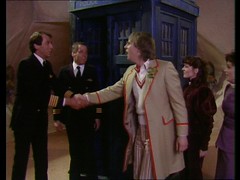 MASTER: Very well, Doctor. What are your terms?
DOCTOR: You return all the passengers, we have access to both aircraft, you return all the components of my Tardis not necessary for the normal functioning of your machine.
MASTER: And what will you give me?
DOCTOR: A temporal limiter. 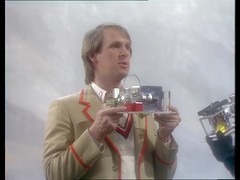 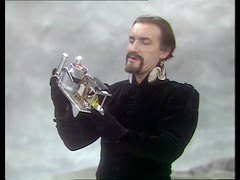 Last time I blogged this I asked

How is the Doctor able to cobble together replacement circuits to enable his Tardis to move in time when the Master couldn't & didn't?

I'd missed Nyssa explaining this bit in the script.

TEGAN: If the Doctor gives the Master a bit of the Tardis, how do we get back?
NYSSA: He must be giving him a redundant circuit. You know how the Doctor collects spare parts.

Then we have what happens to the Master's Tardis when they arrive at Heathrow:

NYSSA: The Master can't land.
DOCTOR: No. Same coordinates as the Tardis, but we got here first. Just. 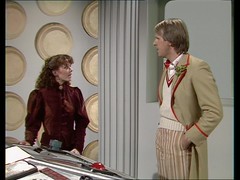 NYSSA: It's gone.
DOCTOR: Knocked back into time-space like a straight six into the pavilion.
NYSSA: The Xeraphin will never be able to regenerate.
DOCTOR: Oh, they stand a much better chance on their own planet.
NYSSA: You sent them to Xeraphas? But the radiation will
DOCTOR: That was millions of years ago. The atmosphere will be perfectly clear by now. Not a very nice climate for the Master, though.
NYSSA: He'll just take off again.
DOCTOR: Well, I think with that extra energy on board, my temporal limiter will need replacing.
NYSSA: He's stuck on Xeraphas?
DOCTOR: Yes. Let's hope it's for good.

Just how does the "knocking the Master's Tardis back into the Time Vortex" work? How does the Doctor know where he'll end up? I suppose he may have hard coded both the Heathrow co-ordinates and those for Xeraphas into the component before giving it to the Master but really I just don't care cos it's an awful mess from start to finish.

Last time round I said that this

is going straight on the "I don't have to watch you again" pile with The Sensorites, The Space Pirates, Face of Evil & Underworld.

Writing these four Blog entries is the first time I've seen Time Flight since. The gap from the previous story, the superb Earthshock to here is HUGE.

TEGAN: The passengers are coming too?
STAPLEY: The passengers are your responsibility, Tegan. When you get them on board, stand by these tyres.
TEGAN: Ladies and gentlemen, we do apologise for the delay. Your flight is now ready for boarding. Would you care to proceed to your aircraft immediately? 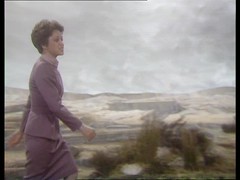 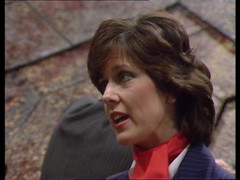 We return to the matter of Stewardess Angela Clifford, played by Judith Byfield. She was last seen entering The Master's Tardis in episode 3, yet when the passengers and crew of Concorde Victor Foxtrot are released in this episode, she's nowhere to be seen! 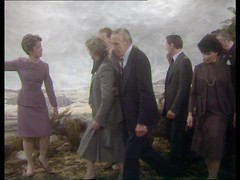 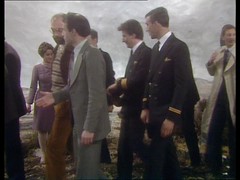 There's a few new Passengers in this episode:

In the studios is Graham Jarvis, who was also a Plasmaton in this and the first episode, returns as a Lazar in Terminus. In Blake's 7 he had been a Pyroan in Volcano.

On Location, presumably during the sequence where Tegan wanders round the Terminal Building we have a couple more Passengers. The Male, Fred Redford, was Visitor Lomon in The Leisure Hive and a Foster & Citizen in Keeper of Traken. He returns as a Demon in Snakedance. 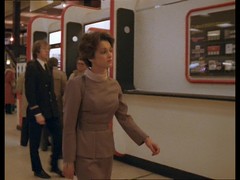 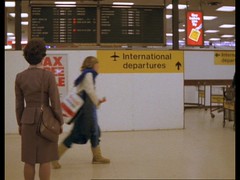 Val McCrimmon makes the second of her two onscreen appearances in Doctor Who as the female passenger, having played a female crew member in the previous story Earthshock. I think she could be the woman with the BA bag. She had been the Assistant Floor Manager on Nightmare of Eden, Shada, The Leisure Hive, Warrior's Gate, Logopolis, Four to Doomsday, Kinda & Black Orchid, a role she'd go on to fill on Enlightenment, Resurrection of the Daleks, Paradise Towers & Remembrance of the Daleks. She can also be seen in the Porridge spin off Going Straight as a Shop Assistant in Going Off the Rails.

There's two Policemen in this episode and they're both very familiar names:

Derek Suthern, who I think is the bearded Policeman, was a Path Lab Technician in The Hand of Fear, a Mentiad in The Pirate Planet, a Gracht Guard in The Androids of Tara, a Mute in The Armageddon Factor, a Guard in The Creature from the Pit, a Mandrel in Nightmare of Eden and a Guard in The Horns of Nimon. He was only stopped from appearing in FIVE consecutive stories by his role as a Krarg in Shada not being broadcast: he's the Krarg that was recorded rampaging round the decaying Think Tank in episodes 4 & 5. He then played an Argolin Guides in The Leisure Hive, the ill fated PC Davis in Logopolis and a Cricketer in Black Orchid. He returns as a Man in Market in Snakedance. In Blake's 7 he plays a Federation Trooper in The Way Back, a Scavenger in Deliverance, a Federation Trooper in both Trial & Countdown, a Customer/Gambler in Gambit, a Hommik Warrior in Power and a Space Princess Guard/Passenger in Gold. He too was in The Spy Who Loved Me as an Atlantis Guard. He's a Hotel Guest in the Fawlty Towers episodes The Germans and The Psychiatrist and appears as an Atlantis Guard in the Roger Moore James Bond film The Spy Who Loved Me. 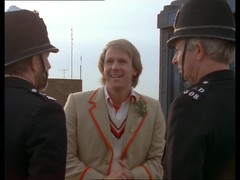 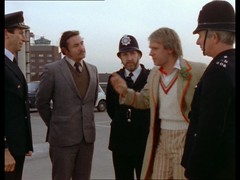 The clean shaven policeman is Les Conrad who had been a Tavern Customer in The Massacre, a Unit Soldier in The Invasion, a Pirate in The Space Pirates, an 1862 Union Soldier and an Alien Guard in The War Games, a UNIT Soldier in Doctor Who and the Silurians, a UNIT Soldier, Control Room Assistant & Policeman in The Ambassadors of Death, a RSF soldier in Inferno, a UNIT soldier again in Terror of the Autons, a Prisoner & Military Policeman in The Mind of Evil, a Colonist in The Colony in Space, a UNIT Soldier in Time Monster and a Technician/Guard/Citizen in Pirate Planet. He returns as a 1983 Schoolmaster in Mawdryn Undead, a Gunrunner in Caves of Androzani, a Jacondan Guard in The Twin Dilemma, which also features his twin sons as the Sylvest twins, and a guard in Vengeance on Varos. He'd been a British Soldier in The Andromeda Breakthrough: Gale Warning, a man in Doomwatch: Burial at Sea, appears in the Blake's 7 episode Gold as a Space Princess Guard/Passenger, is a soldier in The Day of the Triffids and is a Legionnaire in the Douglas Camfield helmed classic serial of Beau Geste

Having looked the transmission times for the episodes up I discover *why* I missed the start. In general odd numbered Season 19 episodes, on a Monday, aired at 18.55 and the even numbered episodes, on a Tuesday, aired at 19.05. Confusing to start with I know, you'd have thought they'd be on at the same time. Well for some reason this episode aired at 18:50 an entire 15 minutes earlier than normal.

Thankfully, later that summer, the BBC provided a repeat season of earlier stories to wipe away the memory of this tosh. My memory has it that Doctor Who & The Monsters came into existence when the the BBC's Monday night American import series (possibly Bret Maverick) ended early. Three stories were chosen to represent each of the Doctor's major monsters and each edited into two 50 minute compilations. On the 12th to 19th July the recently recovered colour copy of the Curse of Peladon (representing the Ice Warriors) was aired followed by Genesis of the Daleks on 26th July & 2nd August and finally Earthshock (for the Cybermen) on the 9th & 16th August. There were no summer repeats of other stories from season 19 shown that year, but two would be shown during the summer of 1983 and another during the summer of 1984.

Later that autumn, in the penultimate weekend of October, two science fiction landmarks occurred on ITV. On Saturday 23rd the first episode of Star Fleet, the English translation of X-Bomber, aired. Then on the Sunday Star Wars aired on UK Television for the first time.

Time Flight was novelised by the story's author Peter Grimwade in 1983. It was released on video in July 2000 and on DVD on 6th August 2007 as part of a boxset containing Time-Flight and the following story Arc of Infinity.