"I am the Chief Constable of this county and you, sir, are under suspicion of murder!"

The Doctor finds Lady Cranleigh & Latoni and shows them the body he's found. They take him back to his room where he changes into his returned costume. Anne meanwhile has been put to bed by a hideously disfigured man. When she awakens she finds Lady Cranleigh and Latoni rebinds the disfigured man. The Doctor comes to the party in costume where he is identified as the assailant by Anne and arrested by Sir Robert Muir, the chief constable of the county, a guest at the ball. Lady Cranleigh refuses to give the Doctor an alibi. The Doctor tells Muir of a second dead body, but when he is taken to the cupboard it is empty and the Doctor is taken away with his companions. The Doctor asks to be taken to the railway station but when they get there the Tardis is gone. They are taken to the police station where the Tardis sits in the yard and the Doctor unlocks it admitting the Police Man. The disfigured man escapes again, setting a fire. The police receive a call that another body has been found and the Doctor takes them to the manor in the Tardis. The figure confronts Lord and Lady Cranleigh, but when the Doctor & his friends enter he mistakes Nyssa for Anne and seizes her. Lady Cranleigh admits the man is her elder son George. Charles confronts his brother on the roof of the burning manor, and the Doctor talks him into releasing Nyssa, proving she is not Anne. George falls to his death from the roof. The Doctor stays for the funeral, and Lady Cranleigh presents him with a copy of George's book, The Black Orchid. 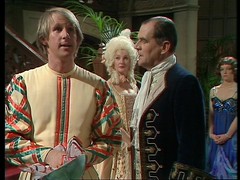 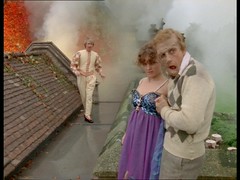 That's novel for Doctor Who. Yes it's the first story since the Highlanders in 1966 not to feature any alien life form, and no science fiction element except the Tardis. But it could be the first Doctor Who story not to feature science fiction or historical events..... I suppose the Smugglers is it's nearest anticendant in Doctor Who: while not featuring actual historical events or figures it does feature a story set in a specific era. What it's most like is an Agatha Christie novel, in particular Hercule Poirot. You could see Poirot getting off the train, with Hastings being drafted into the cricket match and the fiance being Miss Lemon's double. I doubt you'd get away with the story as it is now, you could see some science fiction horror being inserted into it, perhaps having George slowly mutating as a result of contact with some alien artefact. The only problem with that is that perhaps that's a bit too reminiscent of Seeds of Doom. But it works as a story, it's something a bit different and it proves that the two part story is a viable format. And the fifty ish minutes that this story takes up are the equivalent length of one modern episode of Doctor Who.

This is the first two part story since the Sontaran experiment in 1975, which in turn was the only two parter outside the Hartnell era (1964's Edge of Destruction and 1965's The Rescue). Two parters are the solution in the fifth Doctor's era to the problem of having a season length that doesn't divide by 4, the preferred length of a story. But wait! Didn't John Nathan-Turner secure extra funding at the start of season 18, Tom Baker's last, to make a 28 episode season instead of the traditional 26 episode one? What happened to the extra money? I think we can safely say that 2 episodes worth of money went making K-9 & Company this year. Next year is only 22 episodes but would have been 26 if Warhead had been made (yup there's some strike action coming: see Enlightenment, King's Demons & Resurrection of the Daleks for details). The remaining two episodes worth were spent on The Five Doctors with the rest of the episode being paid for as a joint production with the Australian Broadcasting Commission.

Probably the most famous face in this serial is Moray Watson as Chief Constable Sir Robert Muir. In The Quatermass Experiment he played Peter Marsh in Contact Has Been Established and Persons Reported Missing, in Catweazle he was Lord Collingford, in The Professionals he's Jeremy Sangster in It's Only a Beautiful Picture, in Yes Minister he plays the BBC Director of Policy in The Challenge, for Agatha Christie's Miss Marple The Body in the Library he plays Colonel Bantry, in Star Cops he's Nathan Spring's Commander in the first episode An Instinct for Murder and in Midsomer Murders he plays Edward Allardice in Judgement Day. But just look at that CV!: Doctor Who and his Star Cops appearances are mere footnotes. 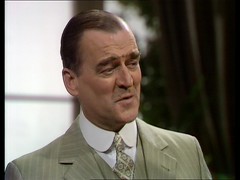 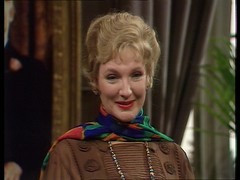 Playing Lord Charles Cranleigh is Michael Cochrane. He'll be back as Redvers Fenn-Cooper in Ghost Light, but before then we'll see his younger bother Martin Cochrane as Chellak in the The Caves of Androzani. And his wife's more famous sister as well...... Michael Cochrane appears in the Jonathan Creek episode where he plays Owen Glendower. 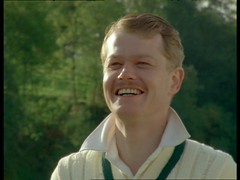 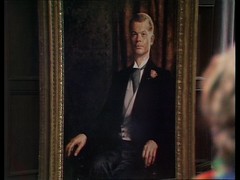 Michael Cochrane is also the model for the portrait of elder Cranleigh brother George but in the episode he's played by stuntman Gareth Milne. He's credited as The Unknown in the first episode & the Radio Times to disguise his true identity: there's more of this next episode! He will be back doubling for the Fifth Doctor in Warriors of the Deep and Caves of Androzani and plays a Mortuary Attendant in Vengeance on Varos. He'll work with Peter Davison again on Campion, which has a similar period setting. In Blake's 7 he's a Sarran in Aftermath, a Federation Trooper in Rumours of Death and a Link in Terminal. He plays a Bank Teller in Sweeney 2 He's also done stunt work on The Black Adder, The Young Ones, Red Dwarf, and Star Cops on TV as well as the films For Your Eyes Only, Krull and Indiana Jones and the Temple of Doom. 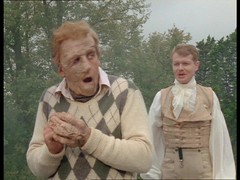 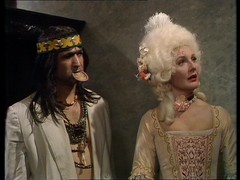 Latoni is played by Ahmed Khalil. He'd been in Gangsters as Khan and plays Mr. Singh in 3 episodes of The Secret Diary of Adrian Mole.

Footman Henry is played by Frederick Woolf, who I can find with more than one spelling of his surname. He later plays a Time Lord in The Five Doctors. 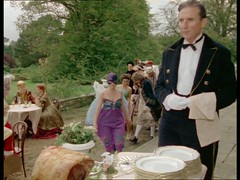 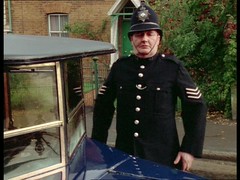 Ivor Salter plays Sergeant Markham: he was previously the Morok Commander in The Space Museum and Odysseus in The Myth Makers. He'd appeared in Pathfinders in Space as the Security Guard in Convoy to the Moon and Paul of Tarsus, which starred Patrick Troughton as Paul, as the Captain in To Rome. In The Sweeney he's Ibbitt in Chalk and Cheese and plays Baker in The Tripods second season episode Escape from the City of Gold. 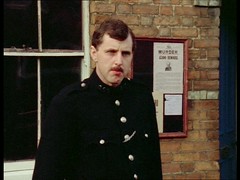 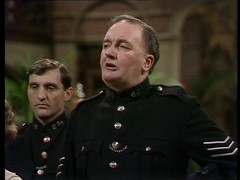 The Police Driver is James Muir who had previously been a UNIT Soldier in The Time Monster, a UNIT Soldier in Invasion of the Dinosaurs, a Muto in Genesis of the Daleks, a UNIT Soldier in Terror of the Zygons, a Brother in The Masque of Mandragora, a Death Attendant in The Sun Makers, a Technician in The Pirate Planet, a Druid in The Stones of Blood, a Louvre Detective in City of Death, a Mandrel in Nightmare of Eden, then would have been the Man Fishing and a Krarg in Shada, after which he was seen as a Foamasi in The Leisure Hive, a Gaztak in Meglos and a Tharil in Warriors' Gate. He returns as a Policeman in Time Flight and an RAF Driver in Remembrance of the Daleks. He'd been in Blake's 7 as a Federation Trooper in Seek-Locate-Destroy, a Phibian in Orac, a Rebel in Pressure Point, a Monster in Dawn of the Gods, a Link in Rescue, a Helot in Traitor, a Pirate Guard in Assassin & a Federation Trooper in Blake. He was the Vl'Hurg Leader in episode 4 of The Hitchhiker's Guide to the Galaxy and was a technician in Moonbase 3: Castor and Pollux and Rentaghost as a Party Guest in the third series fourth episode.

Black Orchid was repeated on 31st August & 1st September 1983, the third story from this season to get a repeat that summer. As to what happened to the 1982 repeat season..... well see the end of the next story. It was released as a novel by the story's author in September 1986 (HB) and February 87 (PB), the last Peter Davison story to be released by Target Books leaving Resurrection of the Daleks un-novelised. It was released on video in July 1994 in a double pack with the preceding story, the Visitation, and on DVD on April 14th 2008.

One is a tinsy bit excited about the next four episodes....