"No, Doctor, you never do understand. You never do!"

The beings surrounding the Doctor ask for his help telling him they are Plasmatons before releasing them. The Doctor, Tegan, Nyssa & Captain Stapley encounter Professor Hayter, a passenger on the first Concorde who has resisted the hypnotic control the other passengers have fallen under. Kalid sends a controlled Plasmaton to subdue Nyssa who is being controlled telepathically to broadcast a warning. The Doctor leaves Tegan to look after Nyssa while he, Hayter & Stapley go to the Mausoleum where they find the crew and passengers of the other Concorde engaged in manual labour trying to break into a large object. The Doctor finds his way to the Kalid's control room and confronts him. His power distracted, Nyssa is free and she & Tegan go to the Mausoleum where they are confronted with illusions of Adric, The Melkur & a Terrileptil. Hayter & Stapley free the two members of Hayter's crew, Bilton & Scobie, but all four are transported to the Kalid's chamber and attacked by a Plasmaton beast. Nyssa and Tegan find their way to the source of the Kalid's power and disrupt it, the Plasmaton beast vanishing and Kalid collapsing to the floor. As the Doctor & Hayter examine the Kalid's equipment a familiar voice rings out and out from the decaying form of the Kalid's body steps the Master. 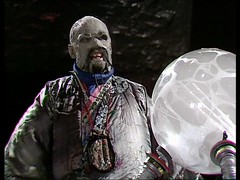 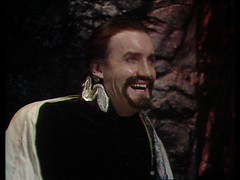 Oh look, it's the Master! What a surprise!

I can remember watching this as a nearly nine year old: loving the Kalid's gunge laden "death" and being and so surprised when he was revealed as the Master. Now I can hear Anthony Ainley's voice in the Kalid but back then, not clue, helped by tjhe use of the Leon Ny Taiy pseudonym, an anagram ofTony Ainley, on the the closing credits of Part One as well as the combined Radio Times cast for Parts One/Two to help disguise The Master's return. 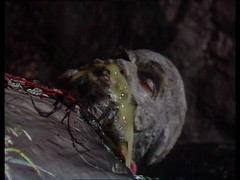 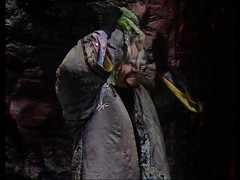 Last time I watched this for the Episode A Day blog, I said:

Just dreadful. The music doesn't suit the on screen action, the Plasmatons in their usual form look rubbish, the Kalid just doesn't work and the only decent set in the program, the Kalid's chamber, is ruined when you see the join between walls and floor. Ugh.

It hasn't gone that badly wrong for me yet on this viewing. It's not doing wonders but is better than I remember!

Not having seen it since The Episode A Day blog probably says something about the esteem I hold it in though!

The illusions in this episode feature Matthew Waterhouse as Adric. During season 19, 20 & 21 two episodes were shown on consecutive days and to save space in the Radio Times both episodes shared a single cast listing. By having him appear here in a speaking role the character got a credit for the two episodes in that week's Radio Times, which was released before Earthshock 4 aired, so there wouldn't be the slightest suspicion that he would die in the final episode of Earthshock. 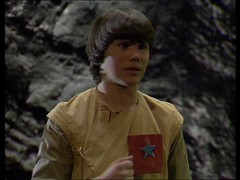 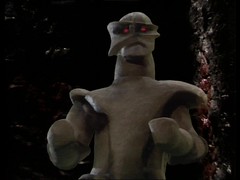 Reprising his (uncredited) role as the Melkur is actor Graham Cole. His first Doctor Who appearance should have been in Shada as a young Think Tank Scientist but following that story's cancelation he made his debut in The Leisure Hive as a Zero Gravity Squash Player then was in Full Circle as a Marshman before making his Melkur debut in Keeper of Traken and then appearing in Kinda as a Kinda tribesman and Earthshock as a Cyberman. He'll return in The Five Doctors as a Cyberman, Resurrection of the Daleks as a Crewmember and The Twin Dilemma as a Jacondan. He was also in Blake's 7 as one of Gerren's Associates in Games and a Federation Trooper in Blake before becoming famous as PC Tony Stamp in The Bill.

Terileptil (Vision) Chris Bradshaw 2 Kinda in Kinda returns as a Schoolboy in Mawdryn Undead, a Lazar in Terminus and a Young Karfelon in Timelash. In Blake's 7 he is a Passenger in Gold. 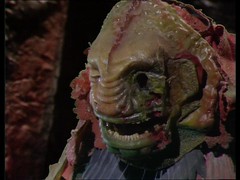 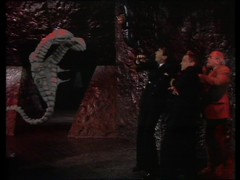 The Dragon Puppeteer is Richard Gregory of Imagineering, the firm providing many of the props and costumes at this time: he designed the Earthshock Cybermen.

The Plasmaton Voice is provided by Andre Winterton, who'll we'll see in the next episod in another role. According to the DWAS production file this role was going to be filled by Judith Byfield who is Stewardess Angela Clifford & the Tannoy Voice. 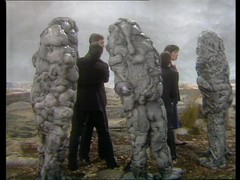 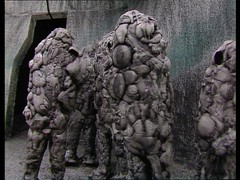 Playing the Plasmatons we have a number of actors, most of which have Doctor Who form

Chris Holmes was a U.N.I.T. Soldier in Day of the Daleks, a Guard in The Time Monster, a Miner in The Monster of Peladon, a Muto in Genesis of the Daleks, a Peasant, Traveller, Workman Peasant, Brother & Soldier in The Masque of Mandragora, a Time Lord in Invasion of Time, and a Citizen in Full Circle. He returns as Ambril’s Attendant in Snakedance, an Orderly in Frontios, a City Person on Street in Attack of the Cybermen, a Native in Trial of a Time Lord Mysterious Planet and a Genius in Time and the Rani. In In Blake's 7 he was a Federation Trooper in The Way Back, a Prisoner in Space Fall & Cygnus Alpha, a Mutoid in Duel & Project Avalon, a Star One Technician in Star One and a Hi-tech Patient in Powerplay. He also is in A Perfect Spy episode 3 as the Second Reporter.

He returns as a Gallifreyan in Arc of Infinity - the same one he played in Invasion of Time? In Blake's 7 he was a Star One Technician in Star One and a Passenger in Gold while in Survivors he played Kevin Lloyd in the first episode The Fourth Horseman.

Martin Grant was a a Soldier in Masque of Mandragora, a Coven Member in Face of Evil, a Young Rebellious Time Lord in Invasion of Time and a Citizen in Full Circle. He returns as a Lazar in Terminus.

Mykel Mills was a Citizen in Full Circle. He returns as a Lazar in Terminus, plus one of the Wrack Deck Crew & Striker Deck Crew in Enlightenment. In Star Wars he is Red Seven Elyhek Rue.

Paul Heasman was a Kinda in Kinda He returns as Stunt Double for Ibbotson in Mawdryn Undead, Stunt Double for The Doctor & Stuntman/Cyberman in Silver Nemesis, which he wasd also the Stunt Arranger for, Stuntmen/Haemovores in Curse of Fenric and was Stunt Arranger for Ghost Light & Survival. In Blake's 7 he was a Guard in Traitor and in Red Dwarf he did stunts on Backwards and Terrorform.

Nigel Tisdall, who I can't find on IMDB, returns as an Extra in The Awakening and a Crewmember is Resurrection of the Daleks. That leaves Steve Fideli who has no other Doctor Who appearances and nothing else on his IMDB I've seen him in. 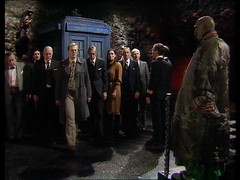 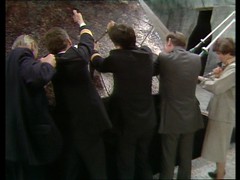 Onto the Passengers whose numbers have been topped up for this episiode:

Gary Dean was a Technician in The Ice Warriors, a Guard in The Enemy of the World, a UNIT Soldier in The Invasion, a German Soldier in The War Games, a Regular Army Soldier in Spearhead from Space, a UNIT Soldier in Doctor Who and the Silurians, an Earth Control Guard in The Mutants, a Lunar Guard in Frontier in Space, a Spiridon in Planet of the Daleks, a guard in Pirate Planet, a Technian in The Armageddon Factor, and a medic in Nightmare of Eden. He returns as a Pallbearer in Remembrance of the Daleks. He was in Doomwatch as a Man in Project Sahara and Fawlty Towers as a Hotel Guest in Communication Problems.

Anne Higgins - who looks like she has two IMDB entries with variants on her name - was an Other in The Sunmakers and a Citizen in Keeper of Traken. In Blake's 7 she was a Passenger in Gold.

Tim Oldroyd had been Pangol Body Parts & one of the Pangol Army in The Leisure Hive, a Rebel in State of Decay, a Kinda in Kinda, He returns as a Vanir in Terminus and an Officer in Enlightenment. In Blake's 7 he was, like Graham Cole above, one of Gerren's Associate in Games.

Sylvia Holmes is making her only Doctor Who appearance.