"I could play all day in my green cathedral!"

The Doctor & Sarah are rescued from the ruins of the Antarctic base and flown to London. Scorby and Keeler deliver the seed pod to Harrison Chase. Dunbar arrives angry at the destruction Chase has caused and tells them that the Doctor & Sarah are still alive. The Doctor meets with Dunbar and his superior Sir Colin Thackery at the World Ecology Bureau. The Doctor worries information has leaked from the bureau and warns them of the danger the pod causes. The Doctor & Sarah leave in a car for the Botanic Institute but are instead driven to a quarry where their driver tries to kill them. The Doctor beats him unconscious. Examining the boot they find a painting by famed painter Amelia Ducat who identifies it as one she sold to Harrison Chase. Keeler has qualms about experimenting on the pod. The Doctor & Sarah drive to Chase's country mansion and are chased by guards but caught by Scorby then taken to Chase. He tells them he has the greatest collection of plants in the world and the plant that will hatch from the pod will be the centrepiece. The pod starts to activate & Chase is summoned allowing the Doctor & Sarah to escape from Scorby. Sarah is sent to summon help but is swiftly recaptured. The Doctor tries to get back into the house to get the pod. Sarah is taken to the seed pod and held down as it starts to open..... 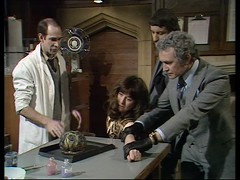 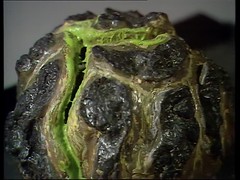 The thing that stands out for me from this episode is how violent the Doctor is. We're used to see the Third Doctor throw people about and defend himself with Venusian Akido but here the Doctor is physically violent in a way we've not seen before striking the Chauffeur with his fist and punching Scorby in the stomach then twisting his neck to render him unconscious. It stands out from what we've seen before and doesn't feel right. In times to come the later piece of action would probably been accomplished by tripping him up with the scarf! My feeling is that this is the script as Robert Banks-Stewart wrote it and script editor Robert Holmes who was pushed for time (30 days between the script's commission & location filming) didn't have time to rewrite the scenes. It feels quite out of character for the Doctor and spoils the episode for me.

On the other hand there is some really great stuff in here with Chase's madness in his devotion to his plants coming to the fore:

CHASE: The hymn of the plants. I composed it myself. People say that you should talk to plants. I believe that. Just as I believe they also like music.
SARAH: Got to get out of here.
DOCTOR: (mutters)
SARAH: What?
DOCTOR: I said, the music's terrible!
SCORBY: Shut up.
CHASE: Now I shall play you my requiem. My Floriana Requiem, dedicated to Linnaeus.
CHASE: You know, Doctor, I could play all day in my green cathedral. 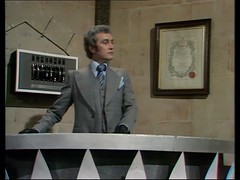 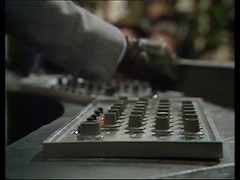 There's some great dialogue elsewhere and the wonderful exchange between the Doctor & Amelia Ducat about the painting really stand out: 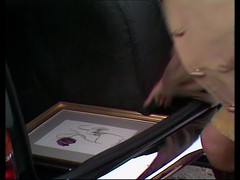 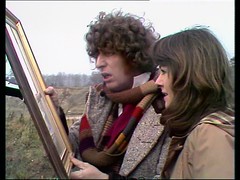 Ducat is the first of several completely dotty older ladies that Tom Baker's Doctor has such fun interacting with. 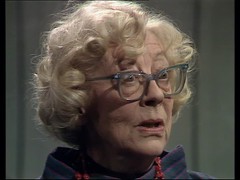 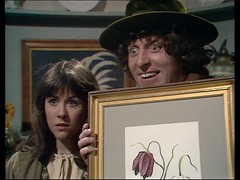 The Doctor's exchange at the start with Thackeray and Dunbar is fab too, especially the Doctor's parting line:

THACKERAY: But why should people go to such lengths to get their hands on the pod?
DOCTOR: Greed. Greed. The most dangerous impulse in the universe. Do you realise that on this planet the pod is unique? I use the word with precision. Unique. And to some people, its uniqueness makes it valuable at any cost.
DUNBAR: You make these two mystery men sound like fanatics.
DOCTOR: Fanatics? Tell him. You tell him. You tell him!
SARAH: These two mystery men had everything planned. They had an aeroplane, guns, even a bomb. It was organised down to the last detail. Now, if that isn't fanaticism, well, what is?
DUNBAR: Surely you're exaggerating.
SARAH: Exaggerate? Now look, I was there. We were nearly killed!
DOCTOR: Be calm. Be calm. Listen, both of you. Are you both listening to me? I think they were dangerous, but they were stooges. I believe they were working for someone else.
SARAH: And if that's true, that someone else must be a complete madman.
DOCTOR: What's more to the point is how they knew of the pod's existence. The discovery had been reported only to your department, correct?
THACKERAY: That's correct. But Doctor, I trust you're not suggesting that information was leaked from this bureau?
DOCTOR: Why not? Why shouldn't it be?
DUNBAR: Doctor, how can you suggest such a thing?
THACKERAY: In any case, what would be the gain?
DOCTOR: Oh, money.
DUNBAR: Money?
DOCTOR: Yes, money. Hired thieves and murderers don't usually work for love.
DUNBAR: Since you seem to have it all sewn up, Doctor, perhaps you can tell us where the pod is now?
DOCTOR: I'll make a guess. Right here, in this country. Action! Action, that's what we need. If we don't find that pod before it germinates, it'll be the end of everything. Everything, you understand? Even your pension!

Another great bit of script is the Doctor's introduction to Harrison Chase:

SCORBY: Some visitors, Mister Chase.
CHASE: So, the meddling Doctor. You lead a charmed life. You arrive without a chauffeur, not even a touch of frostbite.
DOCTOR: How do you do. Have you met Miss Smith? She's my best friend.
CHASE: Is she? And still beautifully intact, I see.
SARAH: I try my best, under the circumstances.
DOCTOR: And this is Mister Scorby. I don't know his first name. And these two gentlemen
CHASE: Yes, thank you, Doctor, we are acquainted.
DOCTOR: How nice. Hand over the pod.
CHASE: After all the inconvenience I've been put to? Oh no, Doctor. Perhaps you didn't know, but in this house is assembled the greatest collection of rare plants in the world. When the pod flowers, I shall achieve the crowning glory of my life's work.
DOCTOR: Take care. I notice a little greenfly here and there.
CHASE: Your envy is understandable, Doctor. However, as I propose to have you both executed
SARAH: Why? We haven't harmed you.
DOCTOR: Be reasonable, Sarah. What choice has he got? We keep interfering.
CHASE: Exactly, Doctor. However, before you die you will be granted a unique privilege. The last things you will ever see will be my beautiful plants. Please come this way.

But in the middle of it is something that stands out as peculiar: The Doctor describes Sarah-Jane Smith as his "best friend". It's an odd turn of phrase for the Doctor who hasn't really described anyone as a friend before. Companion, assistant yes. But friend? Again I wonder if given a little more time to script edit the episode this line might have been tweaked.

Cast: Harrison Chase's violent chauffeur is played by Alan Chuntz who was a regular member of the HAVOK stunt team and has been in the background of many a Doctor Who story either hitting someone or falling down. This is his ONLY credited role in Doctor Who but IMDB also think he was, all uncredited, Harvey in The Seeds of Death episode one, a Thug in The Ambassadors of Death episode 1, a Technician in Inferno episode 1, a UNIT Soldier in Terror of the Autons episode four, a Prisoner in The Mind of Evil episodes three & four and a mercenary in episode five of the same story. He was Omega's Champion in The Three Doctors episode three, a Security Guard in The Green Death episode two, a Guard in Planet of the Spiders part one, a Kaled Soldier in Ravon's HQ in Genesis of the Daleks part one, an Elite Guard in Genesis of the Daleks part five and will return as a Guard in State of Decay part three 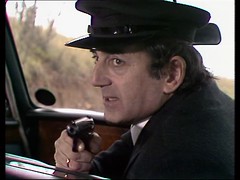 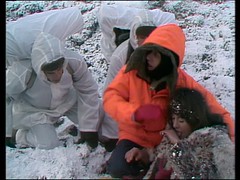 Ian Fairbairn appears briefly at the start of the episode as Doctor Chester, the man in the orange snow gear. He was first in The Macra Terror as Questa, then became a Camfield regular appearing in The Invasion as Gregory and Inferno as Bromley & the Penetration Announcer before this. Camfield keeps using him as he appears in a Camfield episode of The Onedin Line, the first broadcast episode of The Professionals, Private Madness, Public Danger, that Camfield directed and also in one of Camfield's Shoestring episodes Link Up. The same episode also features Doctor who actors Stewart Bevan (Professor Clifford Jones from Green Death), John Woodnutt (most recently in the Camfield directed Terror of the Zygons), Camfield's wife Sheila Dunn (Dalek Masterplan, The Invasion & Inferno) plus Sylvia Coleridge who's Amelia Ducat in this story as well as appearing in Blake's 7: Gambit as the Croupier.

We're back at Buckland Sand and Silica Co Ltd, this time serving as the quarry where the chauffeur tries to kill the Doctor & Sarah. 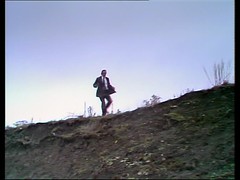 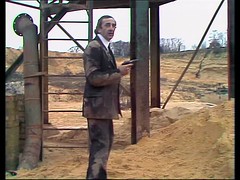 The exterior of the World Ecology Bureau is probably the shortest distance Doctor Who ever travelled to film: it's the entrance to BBC Television Centre! 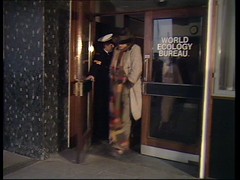 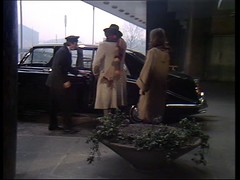 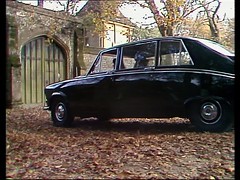 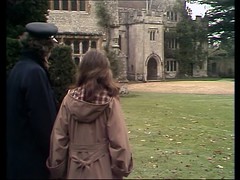 The estate surrounding the house features prominently in the story. 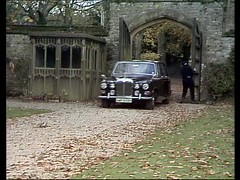 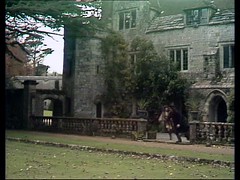 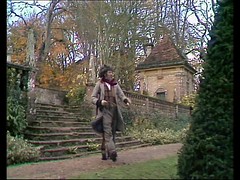 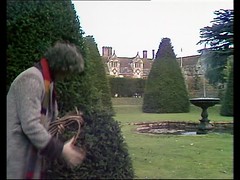 The house is open to the public so you can pay it a visit and cross it off your list of Doctor Who locations!