"I told you he was changing form. Already his mind's been taken over. Very soon his entire body will alter. There'll be a transition period, a grotesque parody of the human form. By now, Winlett himself no longer exists and we must destroy what he's become."

Scorby arms himself to prepare to take the pod by force, despite Keeler's objections. Sarah finds Moberley's body and the base door opened. The Krynoid creature Winlett has become makes it's way through the snow as the Doctor tells Stevenson that they must destroy it. Dunbar speaks with Chase and tells him that they have heard there's been a virus outbreak at the base. Scorby destroys the base's radio when the medical rescue team try to contact them. Keeler finds the opened pod causing them to look for what has come out of it. Scorby takes the Doctor & Sarah prisoner and asks them about the pod. The Doctor tells him it's taken over Winlett. Stevenson returns to the base and is captured, accidentally revealing to Scorby that there is a second pod which Scorby has him fetch from the Freezer. The Doctor & Stevenson are tied up in the base while Scorby ties Sarah to a bomb in the generator plant, despite Keeler's continued objections. The Doctor & Stevenson sever their bonds and escape, the Doctor going to the generator to find Sarah. Stevenson attempts to contact help but is murdered by the Krynoid. Scorby & Keeler escape with the pod in their plane. The Doctor finds Sarah as the Krynoid enters the base's generator plant seeking shelter & food. They escape sealing it in as it's consumed by the explosion.

Perhaps a little on the slow side but there's some decent tension in this episode. Will Scorby & Keller find what they're after? Will the Krynoid kill them all? Will Sarah be rescued before the bomb goes off ? They've been a bit grim in places, with the Doctor proposing to amputate Winlett's arm to save him, the mutating form of Winlett and Scorby's violent attitude but it's all good stuff so far. I've liked these first two episodes which, in the picture of the complete story, essentially form a two part tale by themselves.

If you're thinking the Krynoid monster looks familiar then it is: It's a resprayed Axon monster costume from 1971's Claws of Axos. 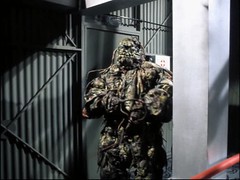 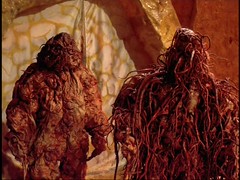 I'll see if I can find a better shot of it for comparison later in the story.

Seeds of Doom was a somewhat late addition to this season, replacing another story. The original idea was that season 13 would conclude with The Hand of Fear, a six part Bob Baker & Dave Martin story that was originally intended to kill off the Brigadier. For various reason the story fell through, being redrafted as a four parter for the next season. Script editor Robert Holmes turned to Robert Banks-Stewart who created Seeds of Doom in something of a hurry. Banks-Stewart was commissioned on 30th September 1975: By the 30th October location filming was taking place. The Axon costume reuse saves time & money creating a new costume, neither of which the production had. Indeed the lack of time is reflected throughout the story in aspects that could have done with being rewriten or altered by the script editor. 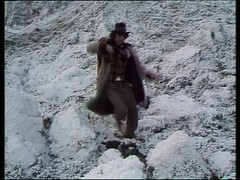 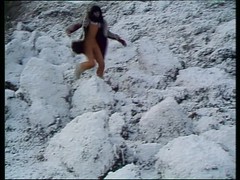 Believe it or not but the exterior Antarctic scenes in this episode were filmed on location at Buckland Sand and Silica Co Ltd near Reigate. It'll be back looking more like it's natural self later in the story.

There's one moment that really took me out the story this episode: as Stevenson gets the second seed pod out the freezer and brings it took Scorby it looks like he's serving a Christmas Pudding covered in cream! 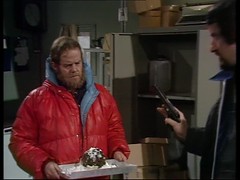 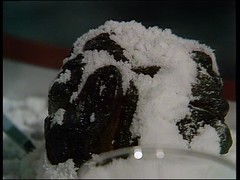