"The Intergalactic Floral Society, of which quite naturally I'm the President, finds Krynoids a difficult subject to study. Their researchers tend to disappear!"

The laser team arrive and attack the Krynoid allowing the Doctor, Sarah, Scorby and Sergeant Henderson to escape back into the house via another door. The Doctor ponders on how Chase is moving about unharmed by the Krynoid and wonders if he is infected or, as Sarah suggests, possessed. Chase is appalled at their use of pesticides. The Krynoid starts to break through the masonry into the house. Henderson searches for timber to patch up their barricade but is found by Scorby, knocked unconscious and fed into the composter. Scorby starts to crack under the pressure of the situation and makes a run for it into the grounds. The plants drag him under water killing him. By now the Krynoid is larger than the house. Sarah goes to look for Henderson and is captured by Chase. The Doctor picks up Beresford's transmission and tell him & Sir Colin that he thinks the Krynoid has 15 minutes till it germinates and asks him to have the house destroyed by the RAF to avoid the seed pods being spread all over Earth. Chase ties Sarah up to feed her into the composter but the Doctor rescues her. He struggles with Chase who is trapped in the composter and killed. The Doctor uses steam from a pipe in the mansion's heating system to drive a path through the plants surrounding the house allowing the Doctor & Sarah to escape as the RAF bomb the house destroying the monster. The Doctor takes Sarah on a trip to Cassiopeia for a holiday, but the Tardis instead materialises back in Antarctica! 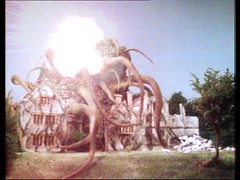 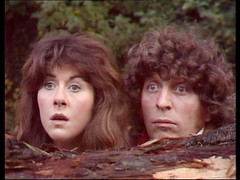 Oh what a shame: UNIT finally comes up against a menace they can defeat by blowing it to smithereens and the Brigadier isn't there to see it happen! Although a worrying though occurs to me: if this had been done with the regular UNIT team that would have been Sergeant Benton going into the composter and that's not the sort of end I'd want to see our hero get!

SARAH: Sergeant? Sergeant?
CHASE: The sergeant's no longer with us. He's in the garden. He's part of the garden.
SARAH: That's very clever of you.
CHASE: Don't humour me, Miss Smith. We're helping the plant world, the sergeant and I. In different ways, of course. I've become part of a life that I've always admired for its beauty, colours, sensitivity. I have the Krynoid to thank, as it thanks me for its opportunity to exist here on Earth. Soon the Krynoids will dominate everywhere, and your foul species will disappear.
SARAH: And you'll all flower happily ever after.
CHASE: You and your kind are nothing but parasites. You're dependant upon us for the air you breathe and the food you eat. We have only one use for you.

We're spared the grisly details here and at least Henderson is unconscious when he goes in which is more than can be said for Chase's eventual fate in the same machine. 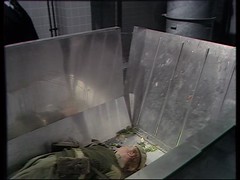 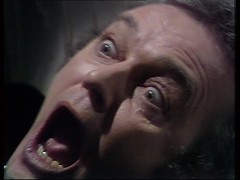 The steam pipes are a rather convenient solution to getting the Doctor & Sarah out the house, maybe if they'd have flagged up that this was how Scorby's greenhouse was heated in an earlier episode it would be less of a "solution plucked from thin air". But as we've seen there was very limited time for editing the scripts so correcting minor details like this we shouldn't really moan about. 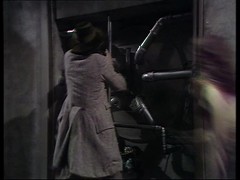 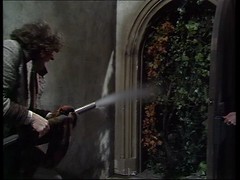 Slightly more serious is the Tardis returning to Antarctica at the end of the episode because the Doctor had "forgot to cancel the coordinate program": The Tardis never went to Antarctica in the first place: the Doctor & Sarah were flown there! These scenes are the last filmed using the original Tardis Police Box prop: it collapsed on Elizabeth Sladen during filming (possibly necessitating a rewrite that sent them to Antarctica by air transport?) 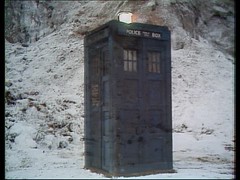 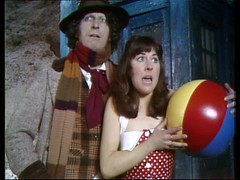 While the first two parts of the story are The Thing From Another World, the last four are a cross between The Quatermass Experiment (man turns into plant-like monster) and The Avengers episode The Man Eater of Surrey Green (alien plant looking to germinate & take over the world) I caught this episode on BBC4 one night and saw lots of people being dragged around by vines which reminded me a lot of Seeds of Doom. A documentary on the DVD claims Day of the Triffids as an influence, and ignores the two I've mentioned above, but I can't really see it. Either way Seeds of Doom is effectively the final word on plant monsters in Doctor Who because they've done it so well here. There have been others both before (the plants in Keys of Marinus 3, the Varga plants on Kemble in Dalek Masterplan, the seaweed in Fury from the Deep and the jungle of Planet of the Daleks) and but only one after (the Vervoids in Trial of a Timelord) such was the success of the monster in the show. The violence in the middle of the story stands out as being wrong and I feel is a symptom of the the lack of time available. These episodes could have done with another pass and some more thorough script editing which perhaps the earlier and later episodes had.

I want to like Seeds of Doom, I really do. But I think it's got too many problems. It's over violent in places, the script needs another pass, tightening it up, and the UNIT soldiers desperately need to be the ones we're familiar with. Plus my mind keeps saying "That's Boycie and Camp Freddie!" It's good but I think with a little more work and time, which the production team didn't have since this was a late replacement for another tale, this could have been an incontestably great story

Seeds of Doom closes Season 13, which has had SIX stories, the most since season six in 1968/9. It's the only 6 parter this year and sets a pattern followed for most of the remaining years of the fourth Doctor: 5 FOUR part stories followed by a single SIX parter. The next three seasons, Tom Baker's third, fourth and fifth, are all structured like this and that was the plan for his sixth season too, the show's seventeenth, until strike action killed off the production of Shada.

As we said yesterday this is the last UNIT story, though their role has been diminished over the last few years anyway and their regular staff disappear over the course of this season. This is the second & last Doctor Who script from Robert Banks-Stewart. He would go on to create detective shows Shoestring and Bergerac. During 2015 he released his memoir, "To Put You in the Picture", through MIWK publishing and died on Tuesday 12th January 2016. His publisher remembers him here and here's his obituary from the Guardian.

It's also the last Doctor Who directing job for Douglas Camfield. His wife, actress Sheila Dunn who worked on The Dalek Masterplan, The Invasion and Inferno while Camfield himself cameos in Brain of Morbius, was worried that the stress of a Doctor Who production was putting to much strain on him and worried it may exacerbate the heart condition that caused him to be hospitalised during the making of Inferno. 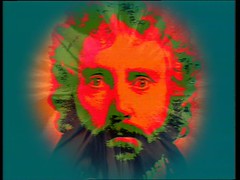 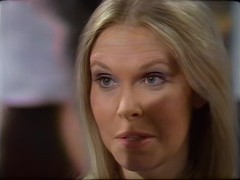 Douglas Camfield continued to work in television directing (deep breath) two episodes of The Onedin Line (I see you Iain Fairbairn and Harry Fielder!), three more episode of The Sweeney (Bad Apple, Pay Off & Trust Red) to go with the 3 he'd done previously (Cover Story , Stay Lucky, Eh? & Thou Shalt Not Kill), two episodes of Philip Hinchcliffe's Target, two episodes of The Professionals (including Private Madness, Public Danger, the first broadcast episode which I'd not twigged he directed till researching this story), an episode of Blake's 7 (Duel, the only one that isn't scored by Camfield's old nemesis Dudley Simpson), 3 episodes of the aforementioned Shoestring (the first episode of the series, Private Ear, then The Link-Up and Another Man's Castle), three episodes of a drama series called Accident, two of Danger UXB, and Robert Holmes's Nightmare Man. I keep seeing the name Maurice Roëves pop up on these productions. Camfield never used him on Doctor Who but his protege Graeme Harper, production assistant on the Seeds of Doom, did when he directed The Caves of Androzani.

A lifelong fan of the French Foreign Legion, he tried to write a Doctor Who script on the subject for the Hinchcliffe/Holmes team. So when Barry Letts and Terrance Dicks came to do Beau Geste for the Classic Serial they immediately turned to Douglas Camfield who called up several of his regular castings including Seeds of Doom's John Challis and Harry Fielder plus Doctor Who regular Pat Gorman. A huge success it earned much publicity including a Radio Times front cover and is available on DVD.

Letts engaged Camfield to direct a new adaptation of the novel The Prisoner of Zenda. He was booked to start work on the production on 30th of January 1984. Three days before, on Friday 27th, he went to bed early, complaining of feeling tired. He never woke up, the heart condition which had plagued him almost in secret for years claiming him as he slept. He was aged just 52.

Douglas Camfield directed more Doctor Who stories and episodes than anyone else: 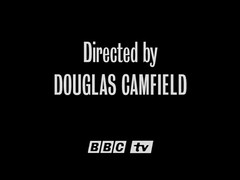 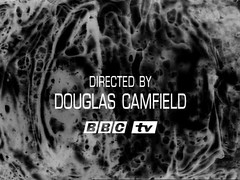 Planet of Giants (episode 3 only)
The Crusade
The Time Meddler
The Daleks' Master Plan
The Web of Fear
The Invasion
Inferno (Barry Letts took over when Camfield was taken ill);
Terror of the Zygons
The Seeds of Doom 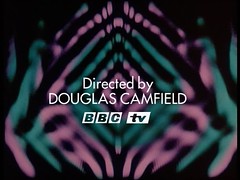 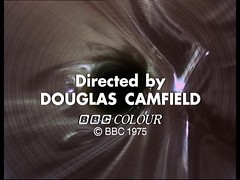 His contribution to the series cannot be underestimated. 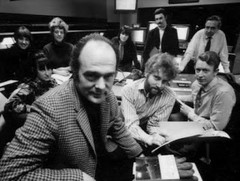 As a postscript Camfield's old friend Barry Letts went to see his boss, Graeme MacDonald. Worried about Camfield's widow Sheila Dunn's finances, possibly recalling the problems Kismet Delgado had following the death of her husband Roger Delgado some years before, the two arranged for Camfield's fee for the story to be paid to Dunn. Sheila Dunn outlived her husband by 20 years, dying in 2004 aged 63.


Seeds of Doom has never been repeated by the BBC despite it's popularity with fans. Douglas Camfield made notes on cutting it down to a compilation version for broadcast during the 1976 Christmas period but in the end two different stories, the Pyramids of Mars & the Brain of Morbius were shown. Seeds of Doom was one of three Doctor Who stories novelised by producer Philip Hinchcliffe. The other two were the following story, Masque of Mandragora and the first Doctor tale the Keys of Marinus. It was released on a double video tape in 1994 and on DVD in October 2010