428 The Masque of Mandragora: Part One

"You're already tall enough, Doctor. You will answer my questions civilly and promptly or your body will be lengthened on the rack!"

The Tardis is invaded by the Mandragora Helix which uses it to take it to late 15th century Italy. Giuliano has just succeeded his father Duke, who died exactly when astrologer Hieronymous predicted it. Hieronymous is working for Giuliano's uncle, Count Federico, who has poisoned his brother & seeks to kill the new Duke. Sarah is abducted by black robed cultists who knock the Doctor out. When he comes round he sees Mandragora energy which has escaped the Tardis and has gone on a rampage. Federico & Hieronymous bring Giuliano the prediction of his death. The Doctor searches for Sarah but guards take him captive. Sarah is taken to the hidden temple of the cult of Demnos where the high priest makes preparations to sacrifice here while the Doctor is taken to Federico who tries to interrogate him. Federico doesn't believe the Doctor's story and orders him executed, but Giuliano is intrigued by him. Sarah is drugged prior to sacrifice while the Doctor is taken to the executioner's block.

Ah Masque of Mandragora. Stuck between several much loved stories it's a bit ignored. I've always had a bit of a problem with it as a TV story: I've never managed to stay awake right the way through it while watching it in one go!

It starts off well though with a wander round the Tardis. I think this is one of the first times we've seen a mass of Tardis corridors. We saw some extra rooms in the early stories, especially in Edge of Destruction, but this really starts our exploration of the ship beyond the control room. 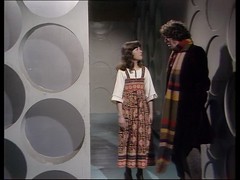 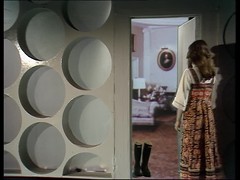 The boot cupboard is just a throwaway joke but it's done very well. Sadly the next time we go walkabout in the Tardis it won't look anywhere near as good as this!

The highlight is the magnificent Tardis secondary control room seen at the start of the story which has a very Jules Verne feel with lots of wood panelling plus some throwbacks to the show's past with the second Doctor's recorder and the third Doctor's shirt & jacket on display. 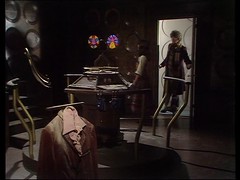 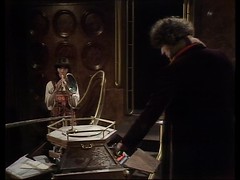 I spent an lot of Seeds of Doom commenting on the physical violence: here the Doctor uses his Venusian Akido to defend himself when attacked by the Cultists and that works much better for me than him punching people all the time.

Essentially this is a game of two halves: I love the stuff in the Tardis to start with and their encounter with the Mandragora energy, no problem. But by the time The Doctor arrives in Italy, over 9 minutes into the story, I've already seen enough of it by then to be bored by it! The setting is quickly established: peasants oppressed by an evil overlord vs the dawning of the age of reason:

GIULIANO: Well, there's this man in Florence who claims that by arranging ground glasses in a certain order, it's possible to see the Moon and the stars as large as your hand.
MARCO: Is that a good thing?
GIULIANO: Well of course it's a good thing. That way we can learn more about them, understand their mystery.
MARCO: What is there to know about the stars except how they move in the heavens, and we've known that for hundreds of years.
GIULIANO: That's the whole point, Marco. Perhaps the stars don't move as we think they move. That's what this man in Florence is saying. Maybe the stars don't move at all. Maybe it's we who move.

They are of course talking about Galileo Galilei.

Playing the villainous Count Federico is John Laurimore who's had a long TV Career generally avoiding science fiction apart from in 1976 when he was in this and Space 1999: Black Sun. 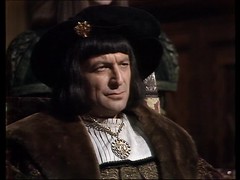 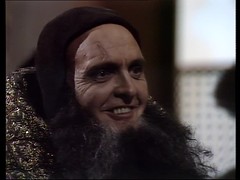 Hieronymous is played fabulously by Norman Jones who previously was Khrisong in The Abominable Snowmen and Major Baker in the Silurians. 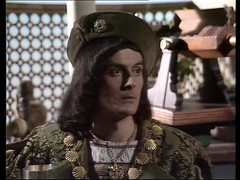 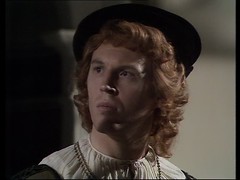 Gareth Armstrong playing Giuliano, was also in Blake's 7 as Parton in Star One while his friend Marco is Tim Piggott-Smith who was Captain Harker in The Claws of Axos.

In amongst The Brothers is Brian Elliswho was the Prisoner in The Sontaran Experiment while their High Priest is Robert James who we heard as Lesterson in The Power of the Daleks. 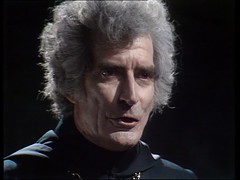 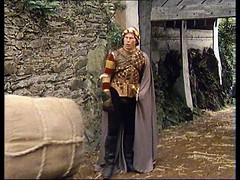 Pat Gorman is credited as a Soldier and I'm pretty sure that it's him playing the guard that gets fried by the Mandragora Energy towards the end of the episode! He's hiding, uncredited, under a brothers hood for the rest of the story!

A couple of other familiar background names appear in this episode. The "forking peasant" (I laughed) is regular stuntman and occasional monster Stuart Fell, who's also a Guard here an returns in a credited role in episode 4! 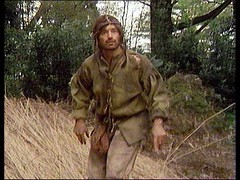 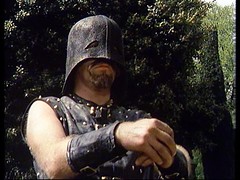 Meanwhile the Executioner is regular stunt double for the third and fourth Doctors Terry Walsh, who I'm pretty convinced is the Doctor leaping onto the horse and riding away from earlier in the episode.

Make yourselves comfortable: there's a lot of extras in the crowd scenes and most of them have Doctor Who elsewhere on their CVs as well as here:

In amongst the hooded brothers we see, or rather don't cos they've all got their hoods up, both Keith Ashley & Cy Town who were inside Dalek shells in Genesis of the Daleks. Town fulfils that role, and others, several times while Ashley also appeared as a Zygon in Terror of the Zygons. Another Brother is Walter Henry who's been an Extra in Small Prophet, Quick Return, uncredited in Doctor Who and the Silurians episode 6 and a Primord in Inferno episode 6. He;s got a credit as Zukan's Technician in Warlord, the penultimate episode of Blake's 7 and has a recurring uncredited role as a Flying Squad detective five first season episode of The Sweeney: Ringer, Jackpot, Queen's Pawn, Jigsaw & Contact Breaker.

Appearing as a courtier here, and a brother later in the serial, is Roy Pearce. He started his Doctor Who career as a Guard in Bell of Doom, followed by a Soldier in Snow Camouflage / Engineer #2 in The Tenth Planet episode 3, a Chameleon in The Faceless Ones episode 1, the Cyberman in The War Games episode ten, uncredited in Doctor Who and the Silurians episode 6, a Villager in The Dæmons episode one & two, a Solos Guard in The Mutants episodes three, four, where he finally gets a credit, and five, plus an Exxilon in Death to the Daleks part one & two. He too has been in Blake's 7 as an Armed Crewman in Space Fall, a Federation Trooper in Time Squad and a Scientist in Project Avalon. Appearing just as a courtier in this episode we have Paul Barton, previously a UNIT Soldier in Doctor Who and the Silurians episode 3 and a Silurian in episodes 4, 5 & 7 of the same take. He'll return as a Skonnos Guard in The Horns of Nimon part one and a Rebel in State of Decay part one. He's got Moonbase 3 to his name appearing as a Technician in View of a Dead Planet.

Onto the Guards: First we have Peter Pocock who was a stunt double for Michael Craze in Tenth Planet 1 and a solider in episode 4 of the same story.
David Rolfe first appeared as an Exxilon in Death to the Daleks parts one to three before returning as a Guard in The Monster of Peladon part one and a Crew Member in Planet of Evil part one & two. He's got a Jeeves and Wooster to his name appearing as Butterfield in Sir Watkyn Bassett's Memoirs. David Wilde is on Doctor Who debut here: he's back as Digby in Black Orchid. Starting as a guard in this episode, before returning as a Courtier/Masquer in episode 4 is Ken Tracey: he was a Dispatch Rider / Golden Age Man in Invasion of the Dinosaurs, a Villager in Planet of the Spiders part one and a Kaled Prisoner in Genesis of the Daleks part two. He too has Moonbase 3 technician form from the episode Castor and Pollux.

On now to a bunch of Peasant villagers in this episode who return as brothers in episode 3: Christopher Holmes was previously a UNIT Soldier in Day of the Daleks episode, a Miner in The Monster of Peladon part three and an Extra in Genesis of the Daleks parts one & two before this. He'll be back as a Citizen in Full Circle part one and a Genius in Time and the Rani part four. He's got a lot of Blake's 7 to his name: Federation Trooper in The Way Back, Prisoner in Space Fall & Cygnus Alpha, a Mutoid in Duel & Project Avalon, a Star One Technician in Star One and a Hi-tech Patient in Powerplay. Clinton Morris prior Who form is just a Presidential Guard in Frontier in Space episode two and three but he gets some Blake's 7 too as Wallace in Space Fall as well as playiong a technician in Moonbase 3's Outsiders. Keith Norrish just has Genesis of the Daleks: Part Three as a Thal Officer to add to his Who CV buthis Blake's 7 includes a Federation Trooper in Bounty, a Salvage Man in Dawn of the Gods and a Guard in Moloch. He's one of a select number of Doctor Who actors to appear in Porridge where he's a Prison Officer in New Faces, Old Hands. Dennis Plenty first appeared in Doctor who as a Tavern customer in The Massacre: War of God and also appeared in a later episode of the same story as a Guard in Priest of Death. He was a Worker / Soldier in The War Machines episode 3, a Soldier in The War Machines episode 4, a Prison Guard in Frontier in Space episode two & three and an Exxilon in Death to the Daleks part two & three. He's appeared in not one but three episodes of Moonbase 3 as a Technician, presumably the same one, in Achilles Heel, Castor and Pollux & View of a Dead Planet and was also in two episodes of UFO: Identified as Lt. David Worth and Computer Affair as a SHADO Mobile 1 Personnel. He's also got a Fawlty Towers on his CV as a PC in A Touch of Class. Leslie Weekes was au Varga Plant in Mission to the Unknown, a UNIT Soldier in The Mind of Evil episode three and a Vogan in Revenge of the Cybermen part one. He's only got one Blake's 7 appearing as a scientist in Project Avalon.

It's frequently men we see as extras so it's somewhat of surprise to find a couple of female supporting artists here with recurrent Who form: Mary Rennie is a Peasant villager here and she returns in Snakedance: Part Three as a Woman Watching Show. Penny Lambirth, another Peasant villager, has a somewhat longer career with Doctor Who: she's a Masquer in part 4, a Ceremony Observer in Snakedance part four, a Crewmember in Resurrection of the Daleks part one, a Citizen in Planet of Fire part one and a Passer by in Attack of the Cybermen part one.

We briefly saw Michael Mulcaster as the Old Duke as he left this world: he was previously a Prisoner in Frontier in Space: Episode Three. His Priest was played by Maurice Quick who was an Auton VIP in Spearhead from Space: Episode 4 and we'll see again shortly as Gold Usher in The Deadly Assassin: Part One.