429 The Masque of Mandragora: Part Two

"When we landed on Earth, we brought back with us part of the Mandragora Helix. I don't know how it got in the Tardis, and now it's here in this temple!"

The Doctor trips his executioner up with his scarf and escapes. The priests of Demnos prepare their alter for sacrifice bringing the drugged Sarah to lie on it. The Doctor hides and finds himself in the catacombs that the Cult of Demnos use. He follows their high priest and rescues Sarah. As he leaves the chamber is invaded by the Mandragora Helix which restores the temple. Guiliano is brought the body of a guard killed by the Mandragora Helix. The golden masked High Priest is given instructions by the Helix for the advancement of it's plans. As he leaves the temple he removes the masks revealing himself to be the astrologer Hieronymous. The Doctor & Sarah are found and taken to Guiliano & Marco who explain his uncle's desire for the dukedom of Saint Martino. They show the Doctor the body who tells that the Mandragora Helix killed it and wonders why the Helix has come to this time & place. The count intercepts a list of dignitaries that the Duke has invited to his accession along with some noted scholars who they have given their patronage to. Hieronymous is ordered to predict Guiliano's imminent death and confers with the Mandragora Helix. The Doctor tries to explain the Mandragora Helix to Guiliano and thinks it might be trying to use cult of Demnos to oppose the scientific achievements of the Renaissance and take over the Earth. The Doctor goes back to the temple to investigate, but they are seen by the Count's spies. The Doctor finds his way to the main temple cavern where he is attacked by the Mandragora Helix. The Count's guards arrive attacking Guiliano. Sarah goes to find the the Doctor but is recaptured by the cult..... 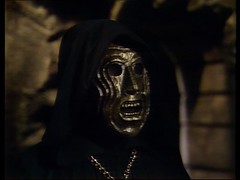 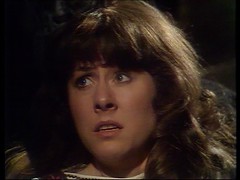 Hmmm. A little slow moving perhaps in places but OK without really being anything special. Yes, the cut of Demnos do seem to be doing the Hokey Cokey when they're about to sacrifice Sarah!

What you do get highlighted in this episode are the wonderful location used in the production at Portmerion in North Wales. Portmerion was designed and built in the style of an Italian Village by Sir Clough William Ellis. Producer Philip Hinchcliffe had been there as a tour guide years before and thought it would make an excellent location for filming. It was only after the series was made that it was pointed out to him that Portmerion had been used in the production of The Prisoner nearly ten years earlier! 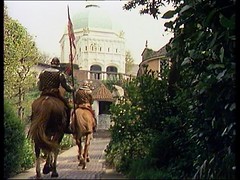 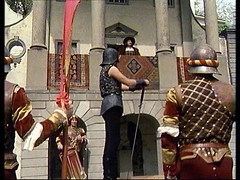 Two of the locations seen in the episode are immediately identifiable to me from The Prisoner: The green domed building is Number 2's residence while the location the Doctor is executed at is The Village's town hall. The Unmutual Location Guide has a Portmerion Gallery but rather unhelpfully doesn't identify where in the series the locations were used and what for instead pointing you towards one of their books! See Doctor Who Locations Portmerion Guide for how to do such a thing properly! The Masque Of Mandragora DVD has a Now & Then feature which extensively looks at the filming locations but once again doesn't make much of their commonality with The Prisoner.

The Titan Voice heard in this episode, and presumably the mocking laughter as the Tardis departs the Mangragora Helix in episode 1, is Peter Tuddenham who provided voices for The Ark in Space and Time and the Rani as well as Orac, Zen & Slave in Blake's 7. 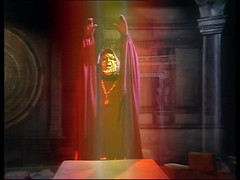 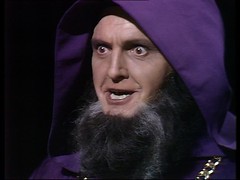 Some lovely wide staring eyed acting from Norman Jones during this episode!

There's a pair of unnamed Pikeman in this episode: one of them, Peter Walshe, was Erak in The Sontaran Experiment. 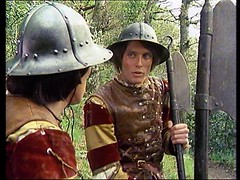 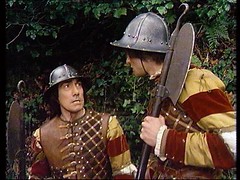 The other, Jay Neill was a Guard in Enemy of the World episode 6 and a Policeman in The Silurians episode 3 and will be back in The Invisible Enemy and Guard Klimt in Underworld. Meanwhile George Ballantine, Federico's Manservant, returns in Snakedance: Part One as the Hawker.