430 The Masque of Mandragora: Part Three

"You defile the sacred image of Demnos! Destroy him now!"

The Helix releases the Doctor and shows him the temple restored using it's power. The Doctor flees, finds Guiliano and together they hold off the Count's guards until they are chased away by the brethren allowing the Doctor & Guiliano to hide in the catacombs. The priest wished to sacrifice Sarah but Heironymous, the high priest, has other plans for her and exposes her to a potion which puts her under his hypnotic control before sending her to the Doctor. They find her in the catacombs and then find a route back to the palace. Sarah questions the Doctor as to how she can understand what Guiliano says. Marco is captured by the Duke's guards. Hieronymous tells the Duke that he has predicted the Count's death but is dismissed by the Count. Finding Marco missing, Guiliano tells The Doctor of the dignitaries & scientists invited to Saint Martino. The Doctor realises if they are killed then the world will be thrown into a new Dark Age and goes to confront who he believes head the cult of Demnos, followed by Sarah. The Count orders Heironymous thrown out of the city. The Doctor confronts Heironymous but Sarah arrives with a poison needle to kill the Doctor. The Doctor breaks her programming, but is seized by the counts guards who have come for Heironymous, who in turn escapes. Guiliano too is seized and thrown in the Count's dungeons with the Doctor, Sarah & Marco. Marco has been made to claim that Guiliano is a worshipper of Demnos. The Cult of Demnos gathers and is infused with the Mandragora Helix. The Doctor tell Federico that Heironymous is the head of the brethren, so he takes the Doctor and two armed men to the temple in disguise. Federico pulls Heironymous' mark away revealing not his face but a glowing ball of energy which slays him. 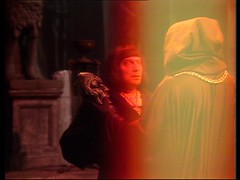 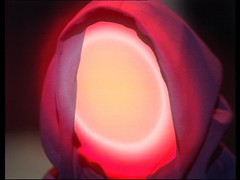 Once again I'm struggling with this story. It's just failing to hold my interest on screen. It's around this episode I usually drift off when we watch it as a four parter and, though I can't put my finger on why, I'm sure I probably would have done this time too! But watching it in 25 minute chunks has at least kept me awake!

The episode did keep pushing the Python button on me though:

FEDERICO: But your numbness has passed, I see. You're a fake, Hieronymous. A fraud, a charlatan, a marketplace soothsayer. 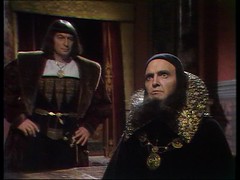 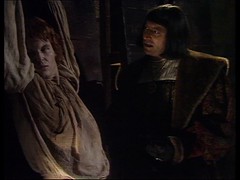 FEDERICO: Scarlatti is enjoying his work?
ROSSINI: He's a craftsman.
FEDERICO: Nonetheless, these cries. I would prefer not to rouse the entire palace. Has he weakened yet?
ROSSINI: He is a stubborn ape, sire.
FEDERICO: I'll have a word with him myself. Sometimes the voice of reason is more effective than the burning iron.

FEDERICO: A simple confession, my young friend.
MARCO: Never.
FEDERICO: Come, Marco. You're of noble birth, a man of intelligence. Use your intelligence and save yourself pain.
MARCO: I shall not lie against the Duke. You can kill me first.
FEDERICO: No, but we may kill you afterwards. Scarlatti's enthusiasm is such that not all survive his attentions.
MARCO: You devils!
FEDERICO: Come now, Marco. Confess that Giuliano is a follower of Demnos and I will reward you well. Come, man, what is your answer?

DOCTOR: Salvatore ambulando.
SARAH: What?
GIULIANO: It's Latin. The question is solved by walking.
SARAH: Latin? I don't even speak Italian. Hey, I never thought of that before. How is it I can understand you?
DOCTOR: Don't you worry about it. I'll explain it later. Come on.
SARAH: All right.

This episode goes to some lengths to try to explain why the Doctor & his companions can understand the language wherever they go. It's explained here as a telepathic gift provided by the Tardis to those that travel in her and as we've seen, Genesis of the Daleks for example, doesn't need the Tardis to be present.

SARAH: But how did you know I'd been drugged?
DOCTOR: Well, I've taken you to some strange places before and you've never asked how you understood the local language. It's a Time Lord's gift I allow you to share. But tonight when you asked me how you understood Italian, I realised your mind had been taken over.

The Doctor mentions in this episode that he's looking forward to meeting Leonardo da Vinci. Although he's not shown to meet the genius here, he seems to know him by the time of City of Death when he visits his workshop in order to graffiti the parchment the Mona Lisa is painted on.....

In addition to the cast members seen in the previous episodes we've got a few new Brothers this week. James Muir has the most credits: he'd been a Soldier in The Time Monster episode one and Invasion of the Dinosaurs part one, a Muto in Genesis of the Daleks part two & three and a Soldier in Terror of the Zygons part one. He's back as a Worker in The Sun Makers part one and a Technician in The Sun Makers part two, a Technician in The Pirate Planet part one & two, a Druid in The Stones of Blood part one, a Louvre Detective in City of Death part one, a Mandrel in Nightmare of Eden part one, a Foamasi in The Leisure Hive part one, a Gaztak in Meglos part one, a Tharil in Warriors' Gate part one and the Police Driver in Black Orchid part two, all without getting a single onscreen credit! He gets luckier in Blake's 7: after starting out as a Federation Trooper in Seek-Locate-Destroy he's credited as a Phibian in Orac before playing a Rebel in Pressure Point, a Monster in Dawn of the Gods, a Link in Rescue, a Helot in Traitor, a Pirate Guard in Assassin and one of the many Federation Troopers in Blake. As you can see he's something of a BBC regular around this time! His first contact with sci fi TV came in 1973's Moonbase 3 as a Technician in Castor and Pollux. Terry Sartain made his Doctor Who debut earlier as an Alien Technician / Union Recruit in The War Games episode three before playing a Warrior in The Mutants episode one, a UNIT Soldier in The Three Doctors episode one, an Earth Prison Guard / Draconian Guard at Embassy in Frontier in Space episode one, a Draconian in Frontier in Space episode two and an Exxilon in Death to the Daleks part two & three.He'll be back as a Gundan robot in Warriors' Gate part three and a Man in Market in Snakedance part one. In Blake's 7 he was a Crewman in Space Fall and a Hooded Figure in Cygnus Alpha. Clive Rogers appeared slightly earlier as a Space Guard in The Space Pirates episode 1 then a Sniper in The War Games episode two and a Resistance Man in The War Games episode five. He's back as a Mentiad in The Pirate Planet parts one, three & four.