431 The Masque of Mandragora: Part Four

"All has happened as was foretold down the centuries. The waiting, the prayers, the sacrifices. Now, at last, the empire of Mandragora will encompass the Earth, for Demnos is only the servant of Mandragora, and Mandragora is a mighty master of all things. Let the power flood into you, brothers. Tomorrow night we shall witness the last prophecy. As it is written, Mandragora shall swallow the Moon!"

The Doctor escapes from the cavern and averts the execution of Sarah, Guiliano & Marco by bringing news of the Count's death. He has the Palace barricaded to stop the Mandragora controlled brotherhood from attacking. The Doctor calculates the timing of a lunar eclipse that will signal the brotherhood's attack. He approves of Guiliano's decision to continue holding the Masque to celebrate his accession to the Dukedom. The Doctor prepares by mounting an armoured breast plate under his coat and obtaining a length of wire. The Brotherhood gather round the palace as the Masque takes place. Returning to the temple the Doctor uses the wire to ground the chestplate and confronts Heironymous. The wire & chestplate protect the Doctor from the energy bolts that Heironymous fires at him and he starts to be drained from the confrontation. The Doctor's lion costume enters the ball but it removes it's mask revealing itself to be Mandragora energy. Heironymous enters and has everyone taken to the temple as the eclipse starts. There the cult is consumed by Mandragora leaving just "Heironymous" who is revealed to be the Doctor. With the Earth safe and Guiliano now in power, the Doctor and Sarah take their leave.

SARAH: Oh, poor Guiliano. He looked so wistful.
DOCTOR: Yes.
SARAH: Will he have any more trouble from Mandragora?
DOCTOR: No, he won't, but the Earth will. Their constellation will be in position to try again in about five hundred years.
SARAH: Five hundred years. That takes us to just about the end of the twentieth century.
DOCTOR: That's right. Now that was an interesting century.
SARAH: What do you mean, was? 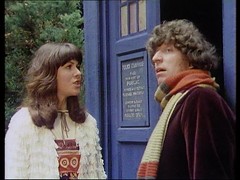 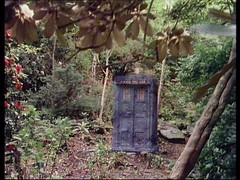 Lets start with the good stuff: This episode looks very pretty thanks to designer Barry Newbery. You can see some of his set designs in The Barry Newbery Signature Collection from Telos publishing. 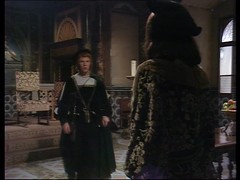 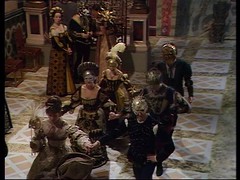 There's some lovely effects during it too: Heironymous' mask lit from behind is just superb! 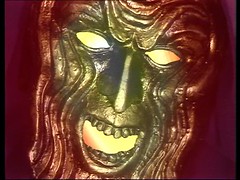 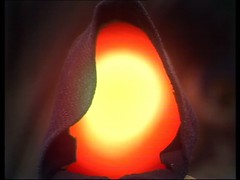 The glowing ball under the hood we saw last episode and it looks no less impressive here. However it is part of the mess that's the ending of the episode. Did it make any sense at all? How the Doctor repels Mandragora is explained in an absurd piece of technobable before he does it:

DOCTOR: All right, listen. Negatively charged high energy particles follow magnetic lines of force, yes?
SARAH: Yes.
DOCTOR: Therefore, if I've guessed correctly about the nature of Helix energy, I should be able to drain it off.
SARAH: But what if you've guessed wrong?
DOCTOR: When did I ever guess wrong about anything?
SARAH: (sotto) Lots of times.

However I'm struggling to relate that to what he does with the wire. He appears to have somehow earthed the altar to drain the energy!

Some explanation of what and why things are happening would be nice! A big, big mess.

In this episode (briefly) is Stuart Fell as the Entertainer, Previous Doctor Who credits include The Curse of Peladon and The Monster of Peladon as Alpha Centauri, Planet of the Spiders as a tramp, The Ark in Space as a Wirrn, The Android Invasion as a Kraal, The Brain of Morbius as the Morbius Monster and the peasant with the pitchfork who gets fried by the Mandragora energy in episode 1. He'll be back in The Invasion of Time as a Sontaran and the State of Decay as Roga. 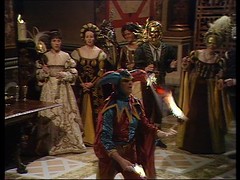 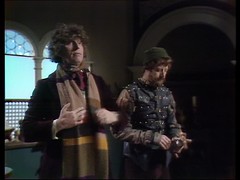 Appearing, briefly as the armourer is Derek Chafer. He first appeared in Doctor Who as a Saxon in episodes 2 & 4, The Meddling Monk & Checkmate, of The Time Meddler. He returns as a Greek Soldier in Temple of Secrets, Death of a Spy & Horse of Destruction, the first, third & fourth episodes of the Myth Makers, a Guard in Bell of Doom, The Massacre part 4, a Lynch Mob Member in Don't Shoot the Pianist & Johnny Ringo, the second & third episode of The Gunfighters, a Cyberman in The Moonbase episode 3 & 4, another Cyberman, and actually credited, in The Invasion episode 6, an Extra in The Space Pirates episode 4 & 5, a UNIT Soldier in Doctor Who and the Silurians episode 3, a Prisoner in The Mind of Evil episode four, a Guard in The Curse of Peladon episode one, an Exxilon in Death to the Daleks parts one to three and a Guard in The Monster of Peladon part one. This is his final Doctor Who appearance and the first time I've been able to identify him in a photo!

We have a lot of extras as Masquers in this episode. The on who appeared in Doctor Who the earliest is Jean Channon who was a Parisian Woman in War of God, The Massacre part 1, and an Extra in The Green Death episode one. She returns as a Passser By in The Talons of Weng-Chiang part two, an Extra (Passenger?) in Nightmare of Eden parts one to four, an Extra (almost certainly a Castrovalvan woman)in Castrovalva part three & four, a Dinner Guest in Snakedance part two, a Lazar in Terminus parts one to four and an Extra in Survival part one making her possibly the longest serving Doctor Who supporting artist. Nicholas Courtney, made his debut as Space Security Agent Bret Vyon 12 episodes earlier but had his final appearance as the Brigadier just 8 episodes earlier giving him a longer career by 4 episodes! Channon has a Blake's 7 to her name too appearing as a Zondawl Citizen in Warlord.

Kevin Moran had previously been a Draconian in Frontier in Space episode two and an Exxilon in Death to the Daleks part one to four, albeit as a corpse in the final episode, as well as an Ice Warrior in The Monster of Peladon part five. Barbara Bermel was a Villager in Planet of the Spiders: Part One and an Android Villager in The Android Invasion part one, She returns as a member of the Sevateem in The Face of Evil part one, a Rebel in tunnel in The Sun Makers part one, a Court Lady in The Androids of Tara part one and another Lazar in Terminus part one. She's got a Space: 1999 to her name appearing as Thulian in the superb Death's Other Dominion.

It's first Doctor Who appearances for Martin Grant, who's also a citizen in Full Circle: Part One, Sheila Vivian, another dinner guest in Snakedance: Part Two and Jill Goldstonwho's a Peasant in State of Decay as well as a Mutoid in Blake's 7: Animals (1981). It's an only Doctor who appearance for Martin Clarke, who's a Native in Blake's 7: Horizon and Eddie Sommer, a Helot in Blake's 7 Traitor and a Magrathean in the fourth episode of the TV version of The Hitchhiker's Guide to the Galaxy.

Not returning to Doctor Who is writer Louis Marks. He'd first written for the show at the end of it's first recording block, penning Planet of the Giants bringing an idea to screen that had been knocking around since day 1. Years later he returned to write Day of the Daleks for the third Doctor, then Planet of Evil & Masque of Mandragora for the fourth Doctor. He died 17th September 2010 aged 82. And since it's his final appearance, I'll remind you one more time that he's not to be confused with Louis Marx, the toy company that made the 1960s Dalek toys!

Masque of Mandragora is one of the Doctor Who novels that I can remember reading from the library quite early on.... but I also owned a paperback copy quite early having bought it in a local news agent. It was the only Doctor Who book I ever saw in there. It's one of three stories adapted by Philip Hinchcliffe, the other two being the previous story The Seeds of Doom and the fifth Doctor Who the Keys of Marinus. It was released in December 1977. A video was released in August 1991 alongside the Three Doctors. The DVD was released on 8th February 2010.