On the dying planet Kastria the traitor Eldrad is sentenced to death and fired into space in a ship which is destroyed. Materialising in a quarry on Earth, the Doctor & Sarah are caught in an explosion and Sarah is trapped under rubble where she finds a stone hand with a ring and a missing finger which she won't let go of. She & the Doctor are taken to a local hospital. The recovered Doctor sees how Sarah is then visits Doctor Carter in the path lab who is analysing the hand. Meanwhile the ring glows and revives Sarah. The Doctor borrows virology's electron microscope to further examine the hand. He dates it by the strata of rock that it was buried in and returns to the quarry. Sarah finds her way to the pathology lab, shooting Dr Carter with an energy bolt and proclaiming that "Eldrad must live!" She places the hand in a container and absconds with it. Examining the scene the Doctor thinks the hand may have come from a prehistoric spaceship crash. When Carter revives he tells the Doctor what has happened and, under the same influence as Sarah, enquires if the Doctor has found anything. They find a sample from the machine has changed, absorbing radiation from the machine analysing it. Sarah goes to the nearby Nunton nuclear power complex, blasting a guard with energy from the ring. She walks straight into the main nuclear reactor carrying the hand which feeds on the radiation, regrowing it's missing finger and starting to move. 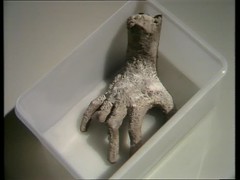 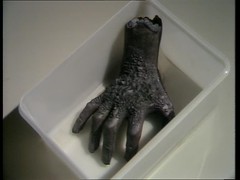 Ah a companion possessed by an evil entity. Have we done this before? Didn't Susan get sort of possessed a few times in Edge of Destruction & The Sensorites? Mind you Sarah was obviously possessed by something before this story started, nobody in their right mind would wear an outfit as silly as hers. It's even referred to in the dialogue as "pink striped overalls just like Andy Pandy" Or it could just be stupidity, after all why didn't her and the Doctor do a runner straight back to the Tardis as soon as they heard the siren? 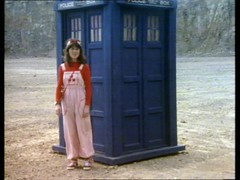 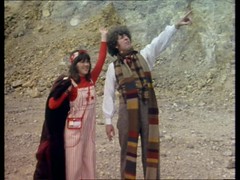 Slickstones Quarry as a location does have the advantage of being an actual quarry I suppose rather than masquerading as an alien planet. It's happened before, in both Terror of the Autons and Seeds of Doom but there the locations were incidental and could have been anywhere: here it's central to the plot. I don't know quite what director Lennie Mayne has been up to since we last saw him for Monster of Peladon but there's some really nice camera work going on here: 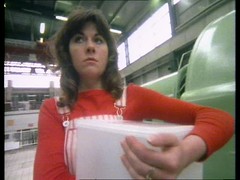 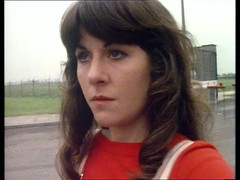 Lots of close ups of the possessed Sarah's face. 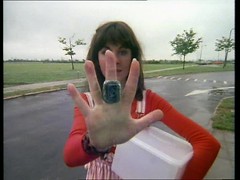 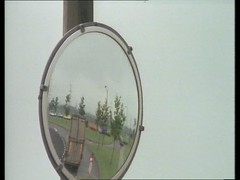 That mirror shot, as she walks towards the security gates, is lovely. 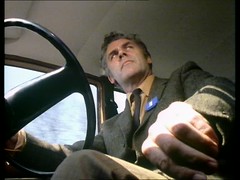 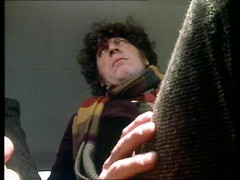 And the low angles used to shoot Dr Carter & the Doctor in the car. 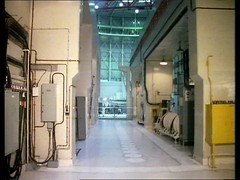 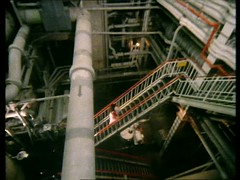 The inside of the Power Station looks fabulous, lots of long and high shots emphasising it's size. 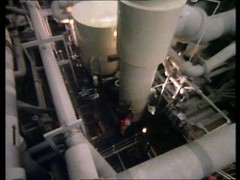 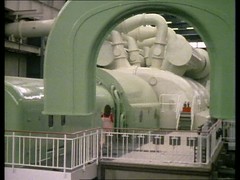 We welcome back Rex Robinson in this episode as Dr. Carter. He's previously been Dr. Tyler in The Three Doctors and Gebek in The Monster of Peladon. All three of his appearances were directed by Lennie Mayne. You can here him interviewed in Toby Hadoke's Who's Round 45 alongside his wife, actress Patricia Prior who was also in The Three Doctors as Mrs. Ollis. 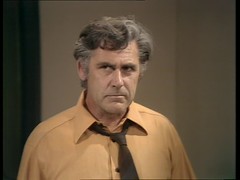 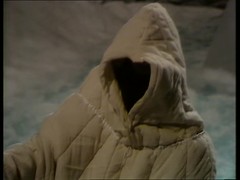 Also returning is Roy Pattison, as Zazzka, the Kastrian technician. He was previously a Draconian Space Pilot in Frontier in Space.

Peter Roy is Technic Obarl, the dead Kastrian in the introduction. He was a Greek Soldier in Temple of Secrets & Death of a Spy, the 1st and third episodes of The Myth Makers, an Extra in The Highlanders episode 1, an Airport Police Sergeant in The Faceless Ones episode 1, a UNIT / Bunker Man in The Invasion episode 1, a Guard in The Seeds of Death episode one, a Space Guard in The Space Pirates episode 1 and an uncredited extra in Doctor Who and the Silurians episode 6. He'll be back as a Guard in The Face of Evil part one, an Extra in The Sun Makers part one, a Gallifreyan Guard in The Invasion of Time part one, a Gracht Guard in The Androids of Tara part one, a Guard in The Armageddon Factor part one, a Policeman in Logopolis part one, an Ambulance Man in Castrovalva part one, a Man in Market in Snakedance part one and a Walk on in Resurrection of the Daleks part one. Like many extras at this time he has Blake's 7 form too appearing as a Citizen / Prisoner in The Way Back & Space Fall, an Alta Guard in Redemption, an Albian Rebel in Countdown and a Federation Trooper / Rebel in Rumours of Death. In the The Hitchhiker's Guide to the Galaxy he plays the Limousine Chauffeur in episode 2. He's got a notable role in the James Bond film Thunderball where he played British Secret Agent 006. He has a less obvious appearance in Return of the Jedi as Major Olander Brit but that hasn't stopped the character from getting a Wookipedia page!

The Doctor at the hospital, credited as an Intern, is played by Renu Setna. This is a very rare role for an Asian actor of Indian/Pakistani extraction in Doctor Who and I'm struggling to think of any others before this. 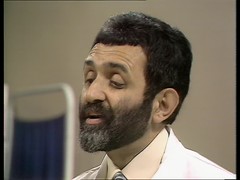 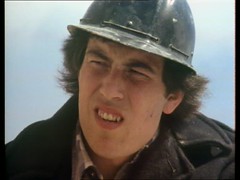 Playing Abbott, the quarry foreman, is David Purcell. I know nothing about him but doesn't he look like the comedian Steve Coogan!

It's here that the IMDB entry for this episode starts running into trouble.

David Cleeve is supposedly an uncredited Radiation Suit Man in this episode. I can't recall seeing ANYONE wearing a radiation suit in this episode but if I recall correctly there is at least one in the next episode. The production paperwork would back this up listing Cleeve as not appearing in this episode but being present in the second one.

Then Derek Suthern is listed as the Path Lab Technician. This time the production paperwork does back up there being Derek Suthern working on this episode. I've watched the hospital scenes through a few times and can't spot a Path Lab technician anywhere. In fact apart from Doctor Carter and the Intern we see a total of one other staff member in the hospital and she definitely is played by a man! So where he is is a mystery. It's Suthern's first Who credit and IMDB thinks he returns as a Mentiad in The Pirate Planet parts one, three & four, a Gracht Guard in The Androids of Tara part one, a Mute in The Armageddon Factor part one, a Guard in The Creature from the Pit part one, a Mandrel in Nightmare of Eden part one, a Guard in The Horns of Nimon part one, a Krarg in Shada, an Argolin Guide in The Leisure Hive part one, the ill fated PC Davis in Logopolis part one, a Cricketer in Black Orchid part one and a Man in Market in Snakedance part one. He can also be found in Blake's 7 as a Federation Trooper in The Way Back, a Scavenger in Deliverance, a Federation Trooper in Trial & Countdown, a Customer / Gambler in Gambit, a Hommik Warrior in Power and a Space Princess Guard / Passenger in Gold. I also spot not one but two episodes of Fawlty Towers on his CV playing a Hotel Guest in The Germans & The Psychiatrist..... Having consulted with m'learned colleagues we think he IS a Path Lab technician, alongside John Deleiu who was a Muto in Genesis of the Daleks, but their part delivering the electron microscope is mostly excised from the final version.

Then there's the power plant worker that Sarah blasts with her ring. He even gets a line in before he's blasted so should be credited! M'learned colleagues again look at the paperwork and suggest it's either Bob Peters or Alan Evans neither of whom I can find an IMDB page for! 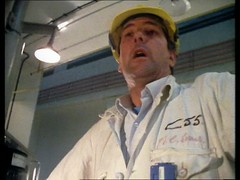 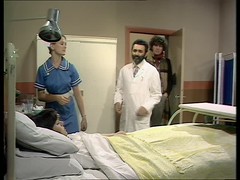 Which just leaves the nurse..... who IMDB offers no credit for at all! The Production paperwork however does list a female walk on for the studio sequences: Libby Ritchie who hasn't got an IMDB page!