"So now you are King, as was your wish. I salute you from the dead. Hail, Eldrad, King of nothing!"

The deteriorating Eldrad is taken by the Doctor to a regeneration chamber where she is crushed by a stone block, another trap left by King Rokkon. However Eldrad then emerges from a chamber restored to his true form. They find their way to the Kastrian race banks where Eldrad is confronted by a message from King Rokkon who tells him that the Kastrians destroyed themselves and their race bank. The Doctor & Sarah attempt to escape, tripping Eldrad over the Doctor's scarf who falls to his doom down a crevasse. Returning to the TARDIS the Doctor receives a summons to Galifrey forcing him to return Sarah to Earth where he bids goodbye to her. 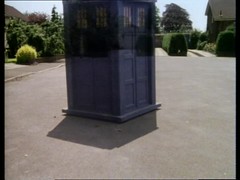 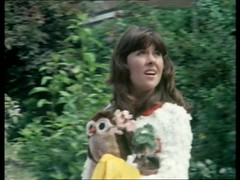 A game of thirds.

The first 9 minutes of the episode give us yet another airing, thankfully briefly, of the "get past the traps to get to your destination" storyline! I didn't like it in Death to the Daleks, I didn't like it in Pyramids of Mars and I don't like it here! No need to keep rehashing the same idea!

Ah we love Stephen Thorne, previously Azal in The Dæmons and Omega in The Three Doctors, but his final Doctor Who appearance as the Kastrian Eldrad isn't a touch on Judith Paris' Female Eldrad and I'm afraid the scenes on Kastria all get a bit silly once he shows up. 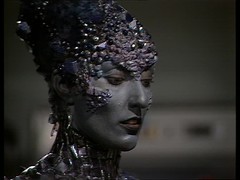 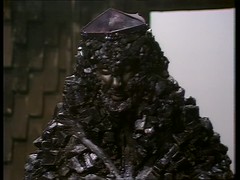 The rock Eldrad is a decent enough design but the female Eldrad just looked so much better in comparison.

Which brings us onto an important question we need to sort out, which thankfully Sarah asks for us.

SARAH: Why is she a he?
ELDRAD: I had to assume a form that would be will be acceptable to the primitives of your planet.
DOCTOR: Ah. And so you modelled yourself on the first primitive you came in contact. He modelled himself on you.
SARAH: Oh, thanks.


It's a nice idea but then proper Eldrad turns into a loud shouty megalomaniac, some distance from the earlier portrayol.

ELDRAD: They are fools. I gave them this. I designed it, programmed it to recognise my cell pattern, and they thought they could use it to destroy me. Bwahhahaha. It is incapable of destroying me, no matter what you or they or anyone else might do. I controlled it. And now I shall control all Kastria, my creation!
DOCTOR: What about your enemies?
ELDRAD: I shall brush them aside, weak and miserable creatures. What can they do in their decrepitude against the might of Eldrad!

And the truth emerges about the lies Eldrad has been weavingP

DOCTOR: Who is Rokon?
ELDRAD: The so-called King of Kastria. It was he who ordered my obliteration. Me, Eldrad, architect of the barriers! They thought they could destroy me, so I destroyed the barriers.
DOCTOR: You destroyed the barriers?
ELDRAD: Yes.
DOCTOR: So all that business of alien invaders was a lie?
ELDRAD: A necessary lie. A means to an end.
DOCTOR: Why should Rokon want to destroy you in the first place?
ELDRAD: Because he knew I would take his place. I was young and strong, he was weak and old. He wasn't fit to rule Kastria. And he had no appetite for conquest.
DOCTOR: Ah. But you do.
ELDRAD: Yes. I wanted Kastrians to be masters of the galaxy. And now, with me at their head, nothing shall stop us! Every planet within range of our starships shall fall to the power of Eldrad. And now, Doctor, I have an audience with my king. King? Hahahaha!

Full on mad villain laugh to end with there!

Fortunately King Rokkon has more presence of mind that Eldrad has given him credit for:

ROKON: Eldrad! After the premature detonation of the module we knew there was a remote possibility that one day you would return.
ELDRAD: Yes, I'm here.
ROKON: But let me tell you. After you destroyed the barriers, after we knew for certain that life on the surface was finished, and the alternative was a miserable subterranean existence, the Kastrian race chose final oblivion. And, because they feared you might return to wage eternal war throughout the galaxy, they elected also to destroy the race banks.
ELDRAD: Traitor! I gave them life!
ROKON: So now you are King, as was your wish. I salute you from the dead. Hail, Eldrad, King of nothing. 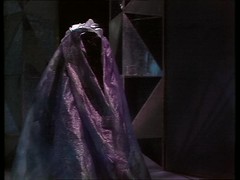 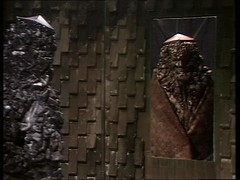 It's a pretty drastic solution to their problem from Rokkon and the Kastrians. Eldrad, naturally doesn't take it well.

SARAH: I wouldn't want to live down here, and I wouldn't want him as a leader.
ELDRAD: Yes, I shall be King. The Earth people. Very backward and primitive, but they have the necessary aggression. I shall rule them! I shall be their god! And you will take me back!
DOCTOR: Oh, no. That's not in the contract. A one-way ticket only. My obligation to you is over. You're in your own world now.

He's not happy about that either, pursuing the Doctor and Sarah as they make their escape. Unfortunately that then leads to he demise and the less said about the stepping over the Doctor's scarf and *then* tripping over and falling down the crevasse the better!

We've mention the last appearance of Stephen Thorne and the last in camera appearance of Roy Skelton already but this episode is also a last Doctor Who directing job for Lennie Mayne. A keen sailor, he died the following year at the age of 50 in a boating accident.

But what people really remember about this episode is departure of Sarah Jane Smith/Elizabeth Sladen. As send off's go hers is a particularly good one with a protracted scene between her & the Doctor in the Tardis making up most of the last seven minutes of the episode.

SARAH: I'll never be warm again. Never, ever, ever.
DOCTOR: No, we're well out of that. Goodbye, Kastria.
SARAH: Do you think that Eldrad, well, do you think that he really is dead?
DOCTOR: Oh, I doubt it. Very difficult to kill.
SARAH: Well, I quite liked her, but I couldn't stand him.
DOCTOR: Whoa, easy, old girl, easy. These temperatures must have affected the thermo-couplings.
SARAH: Yes, I know how she feels. I think Kastria must be the coldest planet in the galaxy.
DOCTOR: Oh, rubbish. I've been to much colder places.
SARAH: Oh, big deal. It's all right for you. I'm human. We're not so thick-skinned.
DOCTOR: Where's that astro-rectifier? What did you say?
SARAH: Thick-skinned.
DOCTOR: Oh, good, good.
SARAH: Here.
DOCTOR: Multi-quantiscope.
SARAH: You know, I might as well be talking to the moon. You don't even listen to me.
DOCTOR: Mergin nut.
SARAH: What?
DOCTOR: No, no, forget the mergin nut. I'll have the ganymede driver.
SARAH: There.
DOCTOR: Thank you.
SARAH: Oh, I must be mad. I'm sick of being cold and wet, and hypnotised left right and centre. I'm sick of being shot at, savaged by bug-eyed monsters, never knowing if I'm coming or going or been.
DOCTOR: Zeus plug.
SARAH: Oh, I want a bath. I want my hair washed. I just want to feel human again.
DOCTOR: Forget the zeus plug. I'll have the sonic screwdriver.
SARAH: Oh, and boy am I sick of that sonic screwdriver! I'm going to pack my goodies and I'm going home. I said, I'm going to pack my goodies and I am going home! Right! Excuse me!
DOCTOR: What was that you? I don't know why she goes on like this. There's really nothing the matter at all.

DOCTOR: The call. The call from Gallifrey. Gallifrey. After all this time, Gallifrey. I can't take Sarah to Gallifrey. Must get her back home. Must reset the coordinates. South Croydon.

SARAH: Ahem!
DOCTOR: You're a good girl, Sarah.
SARAH: Oh, look, it's too late apologising now. Everything's packed. I've got to go.
DOCTOR: What? How did you know?
SARAH: What?
DOCTOR: I've had the call from Gallifrey.
SARAH: So?
DOCTOR: So I can't take you with me. You've got to go.
SARAH: Oh, come on. I can't miss Gallifrey. Look, I was only joking. I didn't mean it. Hey. Hey, you're not going to regenerate again, are you?
DOCTOR: Not this time. I don't know what's going to happen.
SARAH: You're playing one of your jokes on me, just trying to make me stay.
DOCTOR: No. I've received the call, and as a Time Lord I must obey.
SARAH: Alone?
DOCTOR: Yes.
(The Tardis materialises.)
SARAH: And I'll give your love to Harry and the Brigadier. Oh, and I can tell Professor Watson that you're all right.
DOCTOR: We've landed, Sarah.
SARAH: What?
DOCTOR: We've landed.
SARAH: Where?
DOCTOR: South Croydon. Hillview Road, to be exact.
SARAH: That's my home. Well, I'll be off then. Here.
(She gives him his coat back.)
DOCTOR: Thanks.
SARAH: Don't forget me.
DOCTOR: Oh, Sarah. Don't you forget me.
SARAH: Bye, Doctor. You know, travel does broaden the mind.
DOCTOR: Yes. Till we meet again, Sarah. 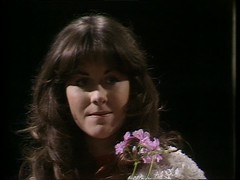 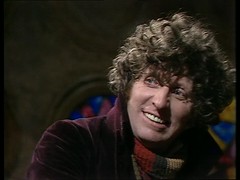 This is followed by Sarah standing in the street as the Tardis materialises and realising that, yet again, the Doctor has failed to bring her home.

SARAH: This isn't Hillview Road. I bet it isn't even South Croydon. Oh. He blew it.
SARAH: Hey, hey. You. He blew it. 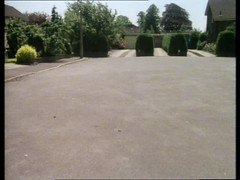 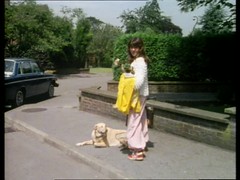 He was aiming for South Croydon but years later, in the new series episode School Reunion, it would be claimed that the Tardis had actually landed in Aberdeen! The filming took place at neither location, instead being recorded at Stokefield Close in Thornbury, Gloucestershire near the other locations used in the story.

As Sarah leaves she's whistling the tune to Daddy Wouldn't Buy Me a Bow Wow..... well I say she is, but Elizabeth Sladen couldn't whistle the tune and the noise is instead provided by director Lennie Mayne in the closing moments of his final episode. The tune is used in response to the dog that Sarah's met on the street but it's actually a little prophetic: in 1981 Elizabeth Sladen would return as Sarah Jane Smith in K-9 and Company, twinned with the Doctor's robot dog. She would return again in 1983's celebration story, the Five Doctors, reunited with Jon Pertwee whom she'd later star opposite in two Doctor Who radio series. During the 80s and 90s Elizabeth Sladen mainly concentrated on the upbringing of her daughter but in 2006 she was lured back to play Sarah Jane Smith in the new series episode School Reunion, which led to several more appearances and a spin off series The Sarah Jane Adventures which only ended when Elizabeth Sladen was taken ill with cancer, the actress passing away on 19th April 2011 leaving her husband, actor Brian Miller and daughter Sadie Miller who has followed both parents into the acting profession.

Hand of Fear's video release is a matter of some controversy to Doctor Who fans. It had an extremely limited video release in 1996 but just two weeks after it was issued all existing Doctor Who videos were withdrawn from sale ahead of the forthcoming Paul McGann TV Movie and Hand of Fear never returned for sale at one point getting a staggering price on the second hand market.

Fortunately it was released on DVD early in 2006, and later sent out by 2 Entertain as compensation to those who had to return their Invisible Enemy DVDs due to an authoring fault on that set.