The alarm sounds allowing The Doctor & Dr Carter to evade the guards holding them. Reactor head Professor Watson orders the reactor shut down. Watson, and then the Doctor, tries to speak to Sarah but all she says is "Eldrad must live", which echoes round the mind of the controlled Dr Carter. The Doctor is attacked by Dr Carter on his way to the reactor, with Carter claiming "Eldrad must Live" but he slips and falls to his death. The Doctor repeats the phrase to gain the possessed Sarah's confidence then overpowers her removing he from the reactor room. In the process she drops the ring she's been holding. Sarah is tested and found to be free of radiation. In the reactor the hand crawls towards the source of the radiation. A technician, Driscoll, is sent to retrieve it and places it in a container. He also finds the ring and becomes possessed like Sarah was. The Doctor asks for the ring but Driscoll denies having seen it. The Doctor hypnotises Sarah and asks her to tell him what was happening. In the decontamination area the hand tries to escape from where it has been stored. Driscoll retrieves the hand and returns it to the reactor, pursued by the Doctor & Sarah. Driscoll sets the reactor to overload causing Watson to evacuate the complex. Driscoll opens the reactor up and carries the hand in..... 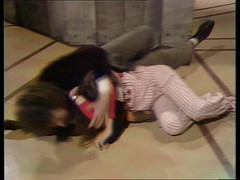 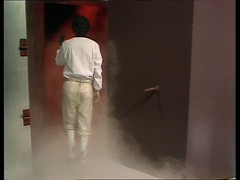 Lots of running around and shouting "Eldrad must live!" but it's a decent fast moving episode.

DOCTOR: Sarah.
SARAH: Hmm? What?
DOCTOR: Sit down.
SARAH: What?
DOCTOR: Now listen. I want you to concentrate.
SARAH: Oh no, that's not fair. Not again.
(Sarah goes straight into a trance.)
DOCTOR: Now, Sarah. Eldrad. Tell me about Eldrad.

Oddly just one character from the first episode, Doctor Carter, appears in this one and he gets bumped off half way through! So we get introduced to a whole bunch of new characters and actors. Glyn Houston plays Professor Watson: he'll be back as Colonel Ben Wolsey in The Awakening.

WATSON: Hello, Susie? Hello, darling. Is mummy there? Oh, did you? Well, your headmistress must have been very pleased. No, no, super. Super. Get mummy for me, would you? Hello, love. Well, it's just to let you know I've got to stay on at the Complex for a while. Yes, it looks like it. No, no, there isn't anything wrong, it's just that, well, I thought I'd let you know where I was.

WATSON: Goodbye. And kiss the children for me, would you? Yes. Yes, goodbye. 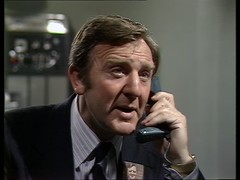 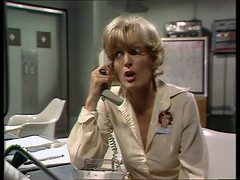 Technician Elgin is played by John Cannon. He'd been in Monster of Peladon too as a Miner in part two & three. He returns as a Passer by in The Talons of Weng-Chiang part two, a Trog in Underworld parts two to four, a Technican in The Pirate Planet parts one to three, a Guard in The Armageddon Factor part one, his only other credited role, a Guard in The Creature from the Pit part one, the executioner in Shada, an Extra in Time-Flight part one, Striker's Helmsman in Enlightenment part one & two and Sir Raulf Fitzwilliam's 1st Servant in The King's Demons part one. Blake's 7 include a Federation Trooper in Project Avalon, Cevedic's Heavy in Gambit, a Labourer in The Harvest of Kairos and a Federation Trooper in Children of Auron while he's got a Moonbase 3 appearance as a Technician in Castor and Pollux. He's got a Porridge to his name as a Prison Inmate in the superb A Night In as well as an appearance in The Empire Strikes Back as a Holographic Imperial Officer. 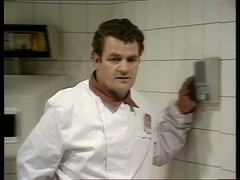 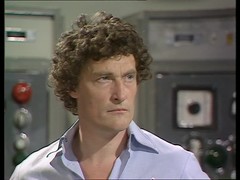 Playing the curly haired Driscoll is Roy Boyd. Science fiction fans probably won't recognise him from his other BBC science fiction appearance as the bald Zukan in Warlord, the penultimate episode of Blake's 7.

As you recall the IMDB entry for the first episode episode listed David Cleeve supposedly as an uncredited Radation Suit Man. The production paperwork didn't back this up and indicated that he is in fact in this episode which would make sense. He'd previously been a UNIT Soldier in The Time Warrior part one, an Ice Warrior in The Monster of Peladon part five, and a Thal Soldier/Guard in Genesis of the Daleks parts one, two and four. He'll return as An Other in The Sun Makers part one and a Deon Guard in Meglos part one.

The production paperwork and IMDB are in agreement that Barry Summerford is in this episode, IMDB thinks he's a security guard. He'd already been a Golden Age Man in Invasion of the Dinosaurs part six, an Elite Guard in Genesis of the Daleks, a Vogan in Revenge of the Cybermen part one, Private Thurston in Terror of the Zygons part two and a UNIT Communications Soldier in The Seeds of Doom part six, He'll be back as a Steaming Audience Member in The Sun Makers part four, a Shrieve in The Ribos Operation part four, a Guard in The Armageddon Factor part one, another Guard in The Creature from the Pit part one and a Foster in The Keeper of Traken part one. His Blake's 7 include a Federation Trooper in The Way Back, a Rebel in Pressure Point, a Rebel in Voice from the Past, a Customer / Gambler in Gambit, a Federation Commando in Volcano, a Monster in Dawn of the Gods and Tando in Blake making him one of the four actors to appear in both the first and last episodes. He was also in the Castor and Pollux episode of Moonbase 3 as a Technician and played the same role in a later episode, View of a Dead Planet.

The phrase "Eldrad must live!" is used repeatedly throughout the story and starts a run of catchphrases in Bob Baker & Dave Martin stories. We'll hear that "Contact has been made!" in Invisible Enemy and then in Underworld we'll repeatedly hear that "The Quest is the Quest!"

Liz walked in while I was watching part 1, took one look a the screen and said "Eldrad must live!" If I know my readership "Eldrad Must Live" comments will be covering episode 1 here, on Facebook and on the TMUK Forum already.......

Curiously you won't hear the phrase again after this episode! I checked the script, hoping to use it as the quote at the top of the episode for all four parts and was devastated to discover it's only in the first two!

The word Fear doesn't show up that many times in the title of Doctor Who stories. It's got two appearances as a First Doctor episode title: An Unearthly Child 3: The Forest of Fear and The Reign of Terror 1: A Land of Fear. After that it's used just twice in an overall story title in The Web of Fear then finally here in The Hand of Fear.