"They'll live long enough to see the end of this accursed planet, and for the Doctor to taste the full bitterness of his defeat!"

The Doctor overcomes his injured foe forcing him from the Matrix before escaping himself. They trace the Master's connection to the Matrix finding Master's corpse and dying Goth. Borusa, unhappy with events, concocts a cover-story making Goth out to be the hero. The Master revives and attempts to seize control of the Eye of Harmony, the Time Lord's energy supply created by Rassilon many years before, to revive his regeneration cycle and destroy the Time Lords. As quakes rock the capital the Doctor struggles with the Master who falls to his doom. The Doctor leaves Galifrey, but as his Tardis departs from the museum where it has been kept Elgin & Spandrell see the Master sneak inside a Grandfather clock, his disguised Tardis, which dematerialises. 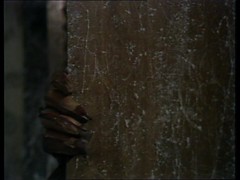 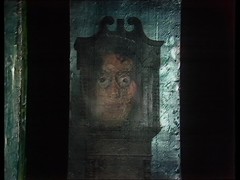 This late the story suddenly turns into a disaster movie with the Master unleashing the power of the Eye of Harmony and nearly destroying the Time Lords capital all so he can live. It's a decent enough episode, in fact the entire story has been pretty good.

What we're introduced to here for the first time is Rassilon, the founder of Time Lord society who gave them Time Travel and harnessed the Eye of Harmony.

ENGIN: And today we tend to think of Rassilon as the founder of our modern civilisation. But in his own time he was regarded mainly as an engineer and an architect. And, of course, it was long before we turned aside from the barren road of technology.
DOCTOR: Yes, that's all very interesting. Could we hear the transgram?
ENGIN: Early history is something of a pet subject.
COMPUTER: And Rassilon journeyed into the black void with a great fleet. Within the void, no light would shine and nothing of that outer nature continue in being, except that which existed within the Sash of Rassilon.
DOCTOR: Must be a black hole.
ENGIN: What?
DOCTOR: Shush.
COMPUTER: Now Rassilon found the Eye of Harmony, which balances all things, that they may neither flux nor wither nor change their state in any measure. And he caused the Eye to be brought to the world of Galifrey wherein he sealed this beneficence with the Great Key.
DOCTOR: What's the Great Key?
COMPUTER: Then the people rejoiced
ENGIN: It's an ebonite rod carried by the President on ceremonial occasions. But it's actual function, if it ever had one, is a complete mystery. 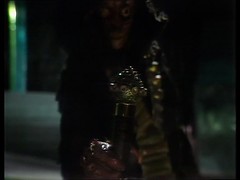 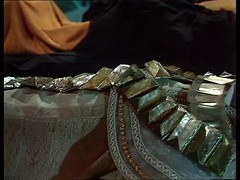 DOCTOR: The Sash. Where's the Sash?
ENGIN: It's gone.
DOCTOR: What?
ENGIN: Well, what could I do? It's only of symbolic value anyway.
DOCTOR: Engin, that Sash is a technological masterpiece. It protects its wearer from being sucked into a parallel universe. All he needs now is the Great Key and he can regenerate himself and release a force that'll obliterate this entire stellar system.
ENGIN: You really mean it?
DOCTOR: Well of course I mean it. Don't you realise what Rassilon did? What the Eye of Harmony is? Remember? That which balances all things. It can only be the nucleus of a black hole.
SPANDRELL: But the Eye of Harmony is a myth. It no longer exists.
DOCTOR: A myth? Spandrell, all the power of the Time Lords devolves from it. Neither flux nor wither nor change their state. Rassilon stabilised all the elements of a black hole and set them in an eternally dynamic equation against the mass of the planet. If the Master interferes, it'll be the end not only of this world, but of a hundred other worlds too.

Later stories, in particular the 1996 Movie, get a little confused about what and where the Eye of Harmony is but it's quite clear here that it's the monolith hidden beneath the Panoptican that's revealed using the great key. 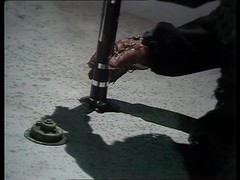 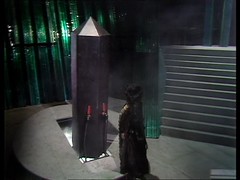 What's said above about Rassilon seems to go against what we heard in the Three Doctors about Omega detonating the star to give them time travel:

OMEGA: In the legends of your people I am called Omega.
DOCTOR: Omega? But that's impossible. Omega was destroyed.
OMEGA: No, brother Time Lord, I was not destroyed, as you can see. Take the man and the girl.
DOCTOR: Where are you taking them?
OMEGA: They will not be harmed, Doctor. They have no part in my revenge.
(Gels take Jo and Tyler out.)
OMEGA: I have been grievously wronged, Doctor, and now it is time for my vengeance!


OMEGA: Without me, there would be no time travel. You and our fellow Time Lords would still be locked in your own time, as puny as those creatures you now so graciously protect.
DOCTOR: You knew your mission was dangerous.
OMEGA: Dangerous, yes, but I completed it, and I did not expect to be abandoned. Many thousands of years ago, when I left our planet, all this was then a star until I arranged its detonation.
DOCTOR: You were the solar engineer. It was your duty.
OMEGA: It was an honour, or so I thought then. I was to be the one to find and create the power source that would give us mastery over time itself.
DOCTOR: Well, you succeeded, and are revered for it.
OMEGA: Revered? Here? I was abandoned.
DOCTOR: The histories say that you were lost in the supernova.
OMEGA: I was sacrificed to that supernova. I generated those forces, and for what? To be blown out of existence into this black hole of antimatter? My brothers became Time Lords, but I was abandoned and forgotten!
DOCTOR: No, not forgotten. All my life I've known of you and honoured you as our greatest hero.
OMEGA: A hero? I should have been a god!

It/'s possible to reconcile these two accounts though: Omega & Rassilon work together on the project. Omega is consumed by the star's explosion and transported into the anti matter universe while Rassilon is the one that stays behind and gets all the glory. Later writers will add a third member to this pairing, a mysterious Other.... but sadly this idea never reached the screen and was merely developed in the books.

Of course the Master has got away. He'll be back, but not for a few years. So keep an eye out for a Grandfather clock! The clock itself was sitting there in plain site in episode 1 when the Tardis was transducted into the capital! 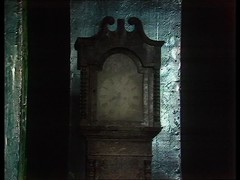 Hildred becomes the Master's third shrunken victim after Goodge in Terror of the Autons and the cameraman in episode 1 of this story. Three more victims follow in Logopolis: a policeman, Tegan's Auntie Vanessa and a Logopolitan.

I like Deadly Assassin. It rolls along nicely, even part three which I'm not convinced is necessary and takes screen time away from a long awaited visit to the Doctor's home planet. However at the time the then President of the Doctor Who Appreciation Society (and future TV Zone editor) Jan Vincent-Rudzki wrote a scathing review of the story feeling it went against everything shown on screen about the Time Lords so far. I've never read the scathing review but I can imagine that the blustering University Academic Time Lords of the first episode and the seeming continuity problems in this episode might have caused him problems! I however see it as a triumphant return for the Master and sets up a story that's picked up four years later in The Keeper of Traken. 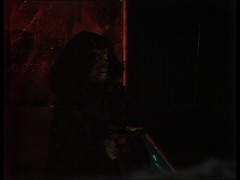 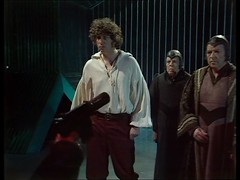 I have to query the stupid title though: Which assassin *isn't Deadly?

After this episode was transmitted Doctor Who took a break through December and over the Christmas period. During this time 60 minute compilation repeats of Pyramids of Mars and Brain of Morbius were shown. Deadly Assassin was itself repeated in August 1977, the Deadly Assassin was novelised by Terrance Dicks. It was first released on video in the USA in 1989 in a compilation version, the only story released in this format not to be sold in the UK. An episodic version was released in the UK in October 1991 on the same day as The Sontaran Experiment & Genesis of the Daleks double pack. The Deadly Assassin DVD was released in March 2009.