" There are phantoms in the beyond."

The Doctor arrives on a planet and meets Leela, a female savage who has been cast out by her tribe for blasphemy against their God Xoanon. She identifies the Doctor as "The Evil One". The Doctor is found by the tribe and taken captive to their village but freed by Leela. She takes the Doctor to a nearby mountainside and shows him his own face carved there. 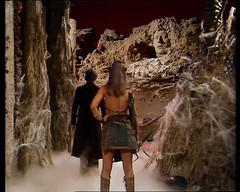 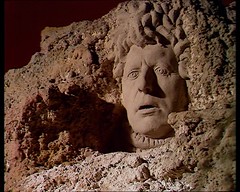 Hmmm. Tom's on fine form throughout this episode but somehow it's not setting my world on fire. And I don't know why. Like Masque of Mandragora something is not there, something is missing. The head at the end is a nice striking image, obviously inspired by Mount Rushmore. My mind keeps wanting to link this story to the similarly named Planet of Evil from the previous season but there's very little connection between them at all bar a studio bound space jungle set and that they are, unfortunately, my two least favourite stories from Tom Baker's first three years.

Right through the episode we get the hint that there's more going on here than meets the eye, with lots of high technology littering the Sevateem camp, including the throne that Andor, played by Victor Lucas, is sitting on. 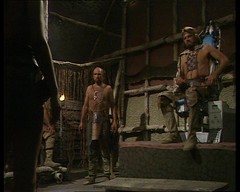 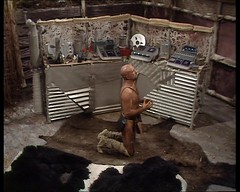 DOCTOR: Andor, please listen to me. I am not the Evil One. I am a traveller, that's all. Your tribe has obviously been visited by travellers before.
ANDOR: Before? But that is impossible.
DOCTOR: They're space travellers, Andor. Men from another world. The whole place is littered with their equipment, their weapons and tools. Your legend of a captive god is obviously related to them in some way.

He then recognises the gesture Lugo makes at him when he's captured:

With hind sight the biggest clue here is provided by the sheet of metal being used as a gong: 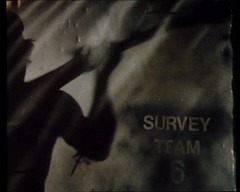 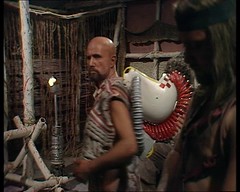 But what really caught my eye was that ridiculous helmet on Neeva's back. I think that's a Pathfinders spacesuit helmet previously seen in Dalek Masterplan on Beaus, Frontier in Space on the Doctor, Planet of the Daleks on a dead Thal and most recently in Android Invasion where it formed the head of the Android!

DOCTOR: Hello. Hello, did I startle you? Don't be afraid. I won't hurt you.
LEELA: The Evil One.
DOCTOR: Well, nobody's perfect, but that's overstating it a little. I'm the Doctor. What's your name?
LEELA: Leela.
DOCTOR: Leela. A nice name, Leela. I never met anyone called Leela. Would you like a jelly baby?
LEELA: It's true, then. They say the Evil One eats babies.
DOCTOR: You mustn't believe all they say. No, these are sweets. They're rather good. Go on, have one 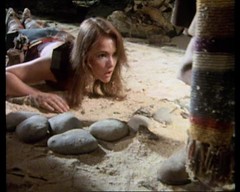 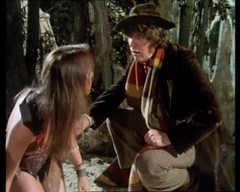 We get a few firsts in this episode though: Most obviously it's the introduction of Leela, who'll be the Doctor's new companion, as played by Louise Jameson. It's a role that would really launch a successful television career including Tenko, Bergerac & Eastenders from 1998-2000 as Rosa Di Marco. 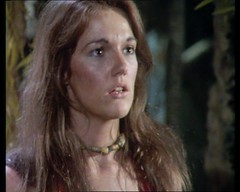 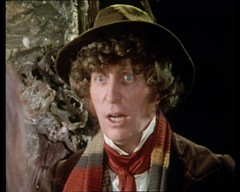 The Doctor seems to take an instant liking to Leela and even if you haven't seen the story or any of it's successors before your "new companion alert" should be flashing. There is something he dislikes about her and that's her use of Janis thorns to paralyse and kill people. He puts a stop to that at once!

DOCTOR: That wasn't necessary. Who licensed you to slaughter people? No more Janis thorns, you understand? Ever.

A little tip of the hat to james Bond there? It's the début for writer Chris Boucher who was obviously a big hit with the production team becoming only the second writer to write two consecutive stories, after Ian Stuart Black wrote the Savages & the War Machines in 1966. In fact he writes three of the next six stories before being stolen away to serve as Blake's 7's Script Editor.

It's also a début for director Pennant Roberts who would go on to work on Blake's 7 too. Pennant Roberts has some of Doctor Who's all time greatest turkeys to his name as we shall see. But there's also Pirate Planet and I can forgive anything for that.


Onto the cast: Leela's father Sole is, briefly, played by Colin Thomas. He'd previously been an uncredited UNIT Soldier in Doctor Who and the Silurians episode 3 and would return as Station Policeman in The Talons of Weng-Chiang part one, a Mentiad in The Pirate Planet, a Foster in The Keeper of Traken, a Time Lord in Arc of Infinity, an Elder in Planet of Fire and a Pallbearer in Remembrance of the Daleks. 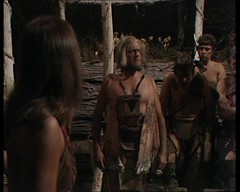 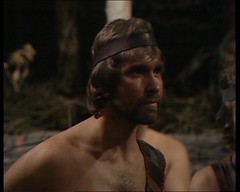 Brendan Price plays tribesman Tomas who tries to assist Leela. He'd been in The Sweeney as Ian Pinder in On the Run and had done a Space: 1999, Catacombs of the Moon, where he played a Security Guard.

Oddly enough Lloyd McGuire, who plays Lugo, was in the same Space 1999 episode as the First Engineer. He's previously been in Terry Nation's Survivors where he played George in the two part Lights of London. 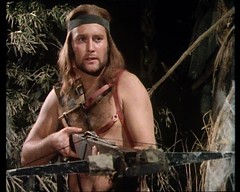 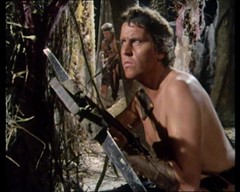 And yes that is our mate supporting artist Harry Fielder playing the warrior who gets shot with the crossbow - see his website for pictures and an amusing anecdote which he retells on the DVD commentary. Harry had previously been a Central European Guard in The Enemy of the World, a Wheel Crew member in The Wheel in Space, a Vogan in Revenge of the Cybermen, a Guard in The Seeds of Doom where he actually got a credit in part 4 and a Guard in The Deadly Assassin part one. He'll be back as a Titan Base Crewman in The Invisible Enemy part one, a Levithian Guard in The Ribos Operation, a Guard in The Armageddon Factor part two, a Tigellan in Meglos and a Security Guard in Castrovalva part one. His Blake's 7s include an Armed Crewman in Space Fall & Cygnus Alpha, a Scavenger in Deliverance and a Federation Trooper in Weapon, Trial, Voice from the Past, Children of Auron, Games, Warlord and Blake. In Space 1999 he's a Medic in The AB Chrysalis, Security Guard in Catacombs of the Moon, Gerry in The Beta Cloud, a Command Centre Technician in The Lambda Factor, Security Guard George in The Seance Spectre, a Survey Team Member in The Immunity Syndrome and a Medic in The Dorcons. In a long career he's been in absolutely everything!.

One of the guards here is Tom Kelly who'll return as a Guard in The Sun Makers and a Vardan in The Invasion of Time. He's also in Blake's 7 as the ill fated Nova in Space Fall and plays the Soldier/Sam Pearce in Sapphire & Steel story 2: The Railway Station. You can hear him interviewed in Toby Hadoke's Who's Round #158. 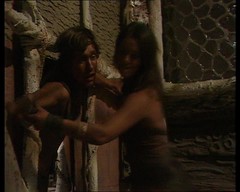 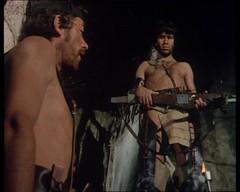 Andy Dempsey is another Sevateem tribesman. IMDB has him down as Lugo's Warrior but the only point I can find him he's with Calib. He's been in The Time Monster as an Atlantean Guard and would appear in Blake's 7 as a Hooded Figure in Cygnus Alpha and then as a Federation Trooper in Bounty. He has a recurring role in Space 1999's first season as a Main Mission Operative appearing in Force of Life, Collision Course, War Games, Death's Other Dominion, Voyager's Return, Alpha Child, Dragon's Domain, Mission of the Darians, Black Sun, Guardian of Piri, End of Eternity, Matter of Life and Death, Earthbound, The Full Circle, Another Time, Another Place, The Last Sunset, The Infernal Machine, Ring Around the Moon, Missing Link, Space Brain, The Troubled Spirit, The Testament of Arkadia and the Last Enemy which think is every episode bar the first, Breakaway!

I can't find Barbara Bermel, another Sevateem, in this episode but she's been a Villager in Planet of the Spiders, an Android Villager in The Android Invasion and a Masquer in The Masque of Mandragora. She's later a Rebel in tunnel in The Sun Makers, a Court Lady in The Androids of Tara and a Lazar in Terminus. Her Space 1999 is as a Thulian in Death's Other Dominion!

Another actor I can't spot is Peter Dean, playing a Tribe Member. He goes on to be Pete Beale in Eastenders.