The Tesh & the Sevateem battle as the Doctor confronts Xoanon. He tries to compare the computer but Xoanon triggers a countdown to an atomic explosion. The Doctor is opposed by Tesh & Sevateem that have fallen under Xoanon's control but when Neeva is killed fighting off Xoanon's monsters he interrupts Xoanon's control allowing the Doctor to complete his work causing Xoanon's circuits to explode. Coming round two days later he speaks with the repaired Xoanon who is now trying to work with the united Sevateem & Tesh. The Doctor leaves to depart in the Tardis but discovers he has some company.... 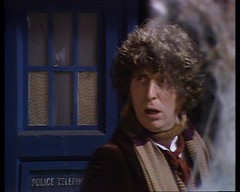 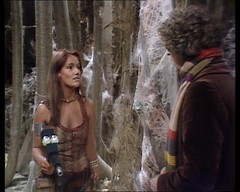 LEELA: Doctor?
DOCTOR: Leela. What are you doing here?
LEELA: I thought you might need an escort. The creatures are still out here. DOCTOR: You don't need that, Leela. The phantoms were merely projections of Xoanon's disturbed subconscious. He's better now.
LEELA: I suppose you're always right about everything.
DOCTOR: Invariably. Invariably. Goodbye.
LEELA: Take me with you.
DOCTOR: Why?
LEELA: What? Well. You like me, don't you?
DOCTOR: Well, yes, I suppose I do like you. But then, I like lots of people but I can't go carting them around the universe with me. Goodbye.
DOCTOR: Come out of there. Out. Come out! Don't touch that! Don't touch

Last time I saw this I couldn't care by this point, but it's worked a bit better this time. Not much mind. There's some great ideas here in this story but the execution is horrible with some truly dreadful comics and a rather rushed confusion which is pulling new things, like how the Doctor wipes his memory print and Xoanon's attempt to destroy them all, out of nowhere.

There's been a hint in a previous episode that the two separate tribes, the Sevateem and Tesh is all some massive experiment. 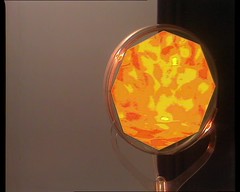 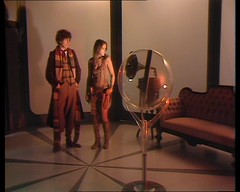 LEELA: Why did you do all that?
XOANON: Could you be more specific?
LEELA: Keep us ignorant and afraid. Make us hate one another.
XOANON: I created a world in my own image. I made your people act out my torment. I made my madness reality.
DOCTOR: But you told yourself you were breeding a race of superhumans.
XOANON: Independence, strength, boldness and courage in one tribe. Self-denial, control, telepathy in the other.
DOCTOR: Hostility and conflict to speed up the process until you were ready to select the best of both.
LEELA: It's horrible.
DOCTOR: Yes, it is horrible. Isn't it horrible?
XOANON: But it's over now. We are all free, thanks to you, Doctor.

Still leaves a slightly bad taste in the mouth especially given the description in episode 3:

DOCTOR: Ah. Well, it has a sort of logic. Outside the barrier, physical courage and strength, inside the barrier, paraphysical achievement and the sort of psi power you used against Leela. It's an experiment in eugenics.

Given the team's recent encounter with Mary Whitehorse and the National Viewers' and Listeners' Association you can understand why the title was changed from the original "The Day God Went Mad".


We get yet another Xoanon voice in this episode from Roy Herrick who was Jean in The Reign of Terror and will shortly be Parsons in The Invisible Enemy.

No I'm afraid that Face of Evil is, in my book, the worst fourth Doctor story yet. Fortunately there's far better stuff just round the corner.

Face of Evil was novelised by Terrance Dicks and released on video in 1999. It was released on DVD on March 5th 2012.

Face of Evil was slightly surprisingly repeated on BBC4 on the 27th & 28th December 2015. The channel schedulers had wanted an original Doctor Who story screened over the festive period, presumably with the caveat that it needed to be a four parter, and got this which started on New Year's Day 1977. Face of Evil getting a BBC repeat produces a nice little statistical oddity in that it gives us out longest run of DW episodes repeated on the BBC from Hand of Fear (BBC4, 2011) through Deadly Assassin (BBC 1, 1977) to Robots of Death (BBC1, 1977) a run of 16 episodes beating the 14 from Kinda to Earthshock (BBC1, early 80s). The record for most repeated episodes in a season still stands at 20, from various reshowings of everything bar Frontier in Space in Season 10.