"You all know that Chub is dead. One of you killed him!"

On a giant robotic sand miner, crewed by Robots under the supervision of a small group of humans, Commander Uvanov is pursuing a mineral rich storm when it is discovered that one of the crew, the scientist Chubb, has been murdered by being strangled. The Tardis materialises in on of the sand scoops, and the Doctor & Leela are saved from being killed when Uvanov reluctantly aborts the pursuit of the storm to investigate the death. The Doctor & Leela are captured by the robots and locked up but quickly escape. They try to return to the Tardis but are separated with Leela finding Chubb's body being kept in a store room while the Doctor finds a second body in a sand scoop. As he investigates the scoop starts to fill with sand burying him and the body. 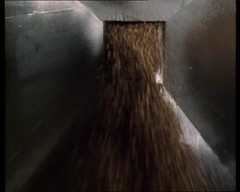 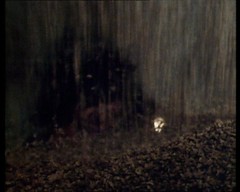 My friend Naomi, she who refuses to watch Planet of the Spiders, once told me that her earliest memory of Doctor Who was the Doctor drowning in baked beans. We're pretty sure she's talking about the end of this episode.

Oh that episode is fabulous. The script is great, dropping in little details to illustrate the society the people are from, their relationships and how they interact with the robots:

CHUB: There was a Vic therapist in Kaldor City, specially programmed, equipped with vibro-digits, subcutaneous stimulators, the lot. You know what happened, Borg? Its first client wanted treatment for a stiff elbow. The Vic therapist felt carefully all round the joint and then suddenly just twisted his arm off at the shoulder. Shumf! All over in two seconds.
BORG: I've never heard that.
CHUB: Kaldor City.
DASK: What was the reason?
CHUB: Reason? It was haywire. I wouldn't let a robot work on me, not for the zelanite in this ship.
BORG: Shut up, Chub. Thank you, V16.
DASK: A Vic class robot has over a million multi-level constrainers in its circuitry. All of them would have to malfunction before it could perform such an action.
TOOS: That's your trouble, Dask. You take all the magic out of life.
CHUB: They go wrong, my friend. It's been known.
DASK: Only when there's an error in programming. Each case on record
CHUB: This was a case. Tore his arm off.
POUL: We're turning. Has anyone noticed?
ZILDA: I heard it was a leg.

Borg doesn't seem to be that popular!

V32: No instrument pack report yet, sir.
UVANOV: Chub. Get after him.
POUL: It's all right, I'll go.
UVANOV: Scientists. How can I run a mine with amateurs.
ZILDA: Chub's all right.
UVANOV: Why? Because he's from one of the founding families?
ZILDA: I didn't mention his family.
UVANOV: One of the Twenty? You know, it's amazing the way you people stick together. No, it's not amazing, it's sickening.
ZILDA: I hope you're watching the traverses, Commander.
UVANOV: Please, don't worry about my job, Zilda. What's she blowing, Toos?
TOOS: The spectrum is muddy. Could be some zelanite, some keefan, traces of lucanol!
UVANOV: Ah, money in the bank. Cheer up, Zilda. I'll make you rich again.

This introduces the concept that some of the people onboard are from a higher social caste than others.

UVANOV: Right, we'll make a start, then.
DASK: Right.
UVANOV: Now, you all know that Chub is dead. One of you killed him.
ZILDA: One of us, surely.
UVANOV: That's what I said.
POUL: You did say one of you.
UVANOV: All right then, one of us killed him. The question is, which one?
TOOS: And why?
UVANOV: Well, this is a two year tour. Maybe Chub was just beginning to get on somebody's nerves.
BORG: Me?
ZILDA: He was certainly getting on yours.
UVANOV: Yes, but we all know where I was.
BORG: I was on the power deck.
UVANOV: Was Dask with you?
BORG: Yes.
DASK: Not all the time. I went to check the syncro-relays.
BORG: Now look, I had nothing against Chub. Okay, he talked too much but
ZILDA: Anyway, the time Poul heard the scream.
CASS: Ah, ah, says he heard the scream. Let's keep the point open.
POUL: Why should I lie?
UVANOV: Now you interrupted Zilda. Founding Family people never interrupt each other. Isn't that right, Zilda?
POUL: Someone interrupted Chub with both hands.
UVANOV: Please, Poul. We're all waiting for Zilda.
ZILDA: I was simply going to say the scream could have been arranged.
TOOS: How?
ZILDA: A communicator recording.
UVANOV: What would be the point?
ZILDA: To give somebody an alibi, Commander. You sent Poul to look for Chub. You could have arranged it all.
TOOS: You mean the poor man might have been dead when Poul heard the scream?
UVANOV: Nice try, Zilda. Now, does anybody know what this is?
DASK: It's a corpse marker.
UVANOV: What?
DASK: Robot deactivation disc. They use them in the construction centres. If ever we used the stop circuit and turned off all our robots, they'd have to go back to a construction centre for reactivation. On arrival, each would be marked with a disc like that to show it was a deactivated robot. The technicians call them corpse markers. It's a sort of a joke.
POUL: It seems our murderer has a sense of humour.
UVANOV: That was on the back of Chub's hand.
BORG: Not just a murderer, then. Seems like one one of us is a maniac.
CASS: Use your brain, Borg. We would know, wouldn't we?
BORG: But we don't. Do we?

More detail about the Founding Families, more antagonism. An early hint that Borg is possibly responsible as he places the Corpse Marker on Cass.

LEELA: But those creepy mechanical men
DOCTOR: Yes. I have seen a similar sort of thing on Korlano Beta. The mine passes over the surface searching for useful ores. Naturally, the heavier elements tend to sink into the substratas, so a really good sandstorm is a bonus. It stirs things up a bit.
LEELA: Sometimes you talk like a Tesh.
DOCTOR: Thank you.
LEELA: It was not well meant. Are the mechanical men friendly?
DOCTOR: Robots don't have feelings. It's the people they serve we must hope are friendly.

And finally an explanation of why the storm the miner is chasing is important.

The way this episode is shot by returning director Michael Briant looks superb: there's a couple of great shots mixing model work and live action with a CSO insert of the bridge set inside the model sand miner and the Doctor wandering around the sand miner: 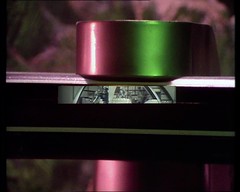 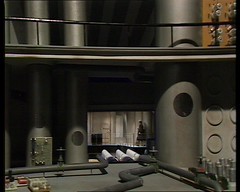 Then there's a lovely aerial shot in the console room, sadly the last appearance of the secondary control room which warped in storage rendering it unusable, and the robot point of view shot as it kills Chubb. 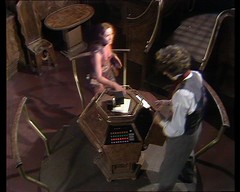 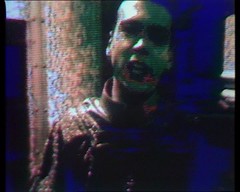 The acting is great all round thanks to one of the best Doctor Who guest casts that we'll quickly see whittled down. Several of them we know from Doctor Who or prominent roles elsewhere: Russell Hunter, playing Commander Uvanov is famous for playing Lonely in Callan. 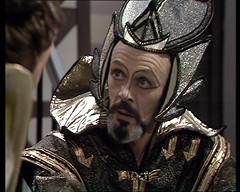 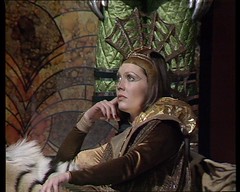 Toos is played by Pamela Salem who we've just heard as a Xoanon voice in Face of Evil. She'll be back as Professor Rachel Jensen in Remembrance of the Daleks. If you're about my age you may remember her as Belor in Into the Labryinth. She was also Moneypenny in the "unofficial" James Bond film ,Never Say Never Again.

Likewise we also heard Rob Edwards, seen briefly here as Chub, as another Xoanon voice in Face of Evil. I'd not heard of Edwards from elsewhere but I can see an appearance in Gangsters, written by Philip Martin, who wrote Doctor Who's Vengeance on Varos and Trial of a Timelord 5-8L Minwarap, and starring Maurice Colbourne who appears as Lytton in Resurrection of the Daleks and Attack of the Cybermen. I had seen him in By the Sword Divided where he plays the pivotal figure of Protestant John Fletcher who married one of the Catholic Lacey daughters in the opening episode setting up tensions that run through the series. Many Doctor Who luminaries appear in the show and it famously donated one of it's sets to become Davros' command centre in Revelation of the Daleks. More recently he's appeared in The Thick of It as Secretary for Defence Geoff Holhurst alongside Twelth Doctor Peter Capaldi. 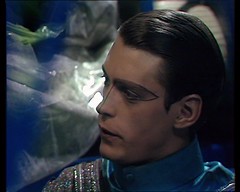 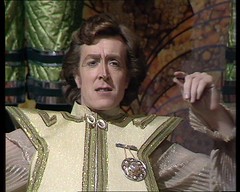 David Collings, as Poul, was previously Vorus in Revenge of the Cybermen and will be Mawdryn in Mawdryn Undead as well as being famous for playing Silver in Sapphire & Steel. He was also Legolas in Radio 4's Lord of the Rings and is in the final Blake's 7 episode, Blake, as Deva.

David Bailie, who plays Dask here, was in Blake's 7 too appearing in Project Avalon as Chevney. 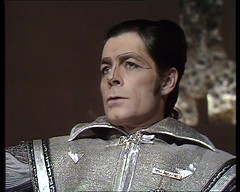 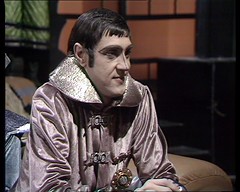 Brian Crouches, as Borg, is the second Travis in the second season of Blake's 7 which means next week it's time for another look at Doctor Who Cast & Crew in Blake's 7 this time, rather fortunately, looking at season 2. You can hear Brian Crouches interviewed in Toby Hadoke's Who's Round #83.

Rounding out the humanoid crew we have two actors without any other major Doctor Who or Sci Fi connections. Cass is played by Tariq Yunus who also was in Gangsters appearing in the first six episodes. I can see a The Professionals on his CB where he's Georgio in Blind Run and a Minder appearance as Chris in Back in Good Old England. 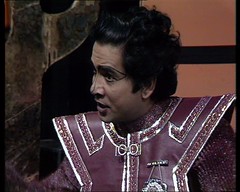 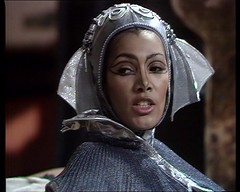 Curiously Tania Rogers, who plays Zilda, also has both series on her CV appearing in Minder as Ruth Reynolds in Don't Tell Them Willie Boy Was Here and as a girl in The Professionals Fugitive.

Finally appearing as the corpse, who apparently is Kerril who we never see alive, is extra Peter Sax who's got nothing else on his IMDB CV! 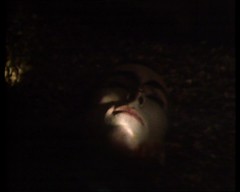 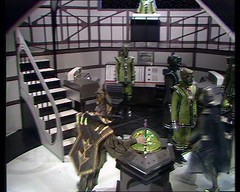 What's that I can see sitting on those two consoles at the rear of the bridge? Answer next week!