Venturing through the mouth the Doctor & Leela find a spaceship and meet it's occupants the Tesh. The Tesh & the Sevateem are descendants of the original crew: The Tesh from the technicians that stayed with the ship and the Sevateem from the survey team that went to survey the planet. Xoanon is the ship's computer repaired long ago by the Doctor but now suffering from a split personality. It has been conducting a eugenics experiment using the Sevateem & Tesh and has now sent the monsters to kill the Sevateem. Using the communications equipment to speak to the high priest Neeva the Doctor summons the Sevateem through the mouth of the stone face. The Doctor goes to confront Xoanon but is mentally assaulted by the computer forced to the floor as it bellows "who am I?" 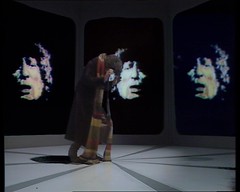 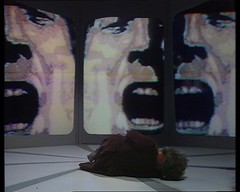 That's one big information dump trying to explain what's going on, most of it achieved through the Doctor's dialogue with Leela:

DOCTOR: I remember now. The Mordee expedition. And I thought I was helping them.
LEELA: Doctor, what are you doing? Will you please help me find this Tesh?
DOCTOR: Tesh? How did you know it was a Tesh? Have you ever seen a Tesh?
LEELA: Well, the skin was loose and shiny, as we're told, and it had two heads, one inside the other.
DOCTOR: That was a protective suit and helmet. Must be another environment through there.

DOCTOR: Another shrine. Seems the Tesh are as ignorant of their origins as your people are.
LEELA: What are their origins?
DOCTOR: How does the litany go? That bit about Paradise. Leela, you said you knew it. You said you were taught it as children.
LEELA: I do, I do. Wait a minute. The Sevateem were sent forth by God
DOCTOR: Slowly, slowly.
LEELA: The Sevateem were sent forth by God to seek Paradise. The Tesh remained at the place of land.
DOCTOR: Yes, exactly. That means the Sevateem explored the planet, while the Tesh remained to work in the ship in the place where it landed. Here.
LEELA: We're the same people?
DOCTOR: Yes, the Sevateem were the survey teams and the Tesh were the technicians. You're all human beings from this colony ship.
LEELA: So what happened? Doctor, what happened?
DOCTOR: I'm rather afraid I did. I misunderstood what Xoanon was.
LEELA: Xoanon? You mean
DOCTOR: At the time, I didn't think he was a being at all. These terminals are dead.
LEELA: What did you think he was?

LEELA: Doctor, what is Xoanon?
DOCTOR: A machine that's become a living creature. An old mission computer with schizophrenia. Not a very pretty thought, is it. Not my fault.
LEELA: How is it your fault?
DOCTOR: When I was here before, I programmed Xoanon for the Mordee. Unfortunately I forgot to wipe my personality print from the data core. Or did I really forget? I forget if I forgot.
LEELA: You're not making yourself very clear, Doctor.
DOCTOR: It may have been my own egotism. Anyway, now it has a split personality and half of it is mine. Is that clear?
LEELA: No.

The concepts are good but the execution, especially those appalling Tesh uniforms and make-up, lets it down. 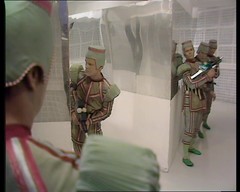 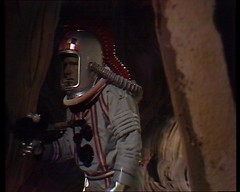 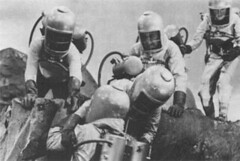 We get a much clearer look at the Spacesuit we saw the tattered remains of in previous episodes here and sure enough, yes that is what I thought it was!

They first appeared in the 1960 BBC serial Pathfinders in Space where you can see they have an air hose attached to the bottom of the helmet: They then return as the delegate probably called Beaus in Mission to the Unknown & The Dalek Masteplan. Beaus' hose is now attached to the middle of his faceplate. 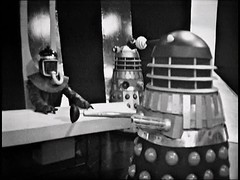 When the hose is removed that leaves a hole that's easy to spot when they then crop up in consecutive Pertwee stories as various spacesuit helmets in Frontier in Space and Planet of the Daleks. Somewhat amusingly the spacesuit the helmet is paired with there, which originally appeared with a different helmet in Ambassadors of Death, will pop up later in this story!

Note the two holes under the helmet from the original Pathfinders air hoses on the photo bellow: 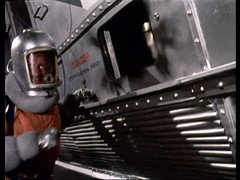 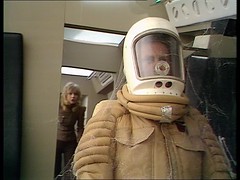 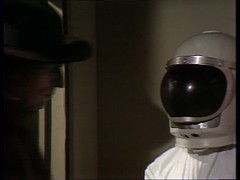 These holes can clearly be seen on the Android Invasion version. It appeared then that the faceplate with the hole has been removed and replaced with a new differently shaped faceplate that doesn't quite cover the front of the helmet necessitating the insertion of some silver gauze at the bottom!

However the Tesh spacesuit above clearly has the hole for Beaus' hose which suggests that this is the Beaus helmet which was not recycled for Android Invasion and the ones in that story are refitted versions of the original Pathfinders helmets, not previously reused in Doctor Who!

Two of the Xoanon voices are provided by actors from the next story:Rob Edwards and Pamela Salem are both in Robots of Death as Chubb & Toos respectively with Salem returning as Professor Rachel Jensen in Remembrance of the Daleks. A third voice is provided by Tom Baker and the fourth by Anthony Frieze, the winner of a competition to visit the Doctor Who studios.

Playing the Tesh captain Jabel is Leon Eagles. I can see Chocky's Challenge, written by future Doctor who script editorAnthony Read on his cv. 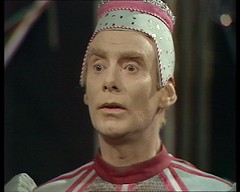 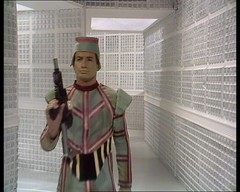 I recognise Stuart Fell as the Tesh Guard who Leela throws: He's been a regular stuntman on the show for many years. Somewhere in this serial as a guard, which could be a Sevateem tribesman or tesh, is another of the regular stunt team Terry Walsh who frequently doubled for Jon Pertwee and Tom Baker. Listed as a Tesh is Timothy Craven, formerly a Cell Guard in Frontier in Space episode two, Robinson in Invasion of the Dinosaurs part six and Short in Robot part two.

So when did the Doctor first come to the planet? A question that has exercised many fans' minds over the years. Some suggest a trip soon after his regeneration during Robot. I'm not sure that quite works, I can't see a suitable point for it to have happened.

A better scenario would be (see Pyramids of Mars 3) for the Doctor to have dropped Sarah off in 1975 at the end of Planet of Evil, had some adventures including his earlier visit here, and then picked her up again in 1980 thus fixing the UNIT Dating problems in one swoop as well as creating a space for him to visit the Mordee expedition. This is my personal favourite theory for what happened.

A third option involves adventures between Deadly Assassin and here. This idea has some appeal to me: not only does The Doctor leave Galifrey alone but he arrives here alone: who knows how long he'd been travelling for by himself? Centuries even. From this point on the Doctor doesn't refer to UNIT and recently seen events, from our point of view, so much so it's plausible that a large amount of time may have passed for him. The show taking a break between these two stories as well makes it all the more tempting to imagine that all sorts of things may have happened between them that we don't see.