The Doctor & Leela return to the village where he discovers that the tribe's holy relics are remnants of a survey expedition and that a transceiver allows the high priest Neeva to speak directly to their god Xoanon. Xoanon speaks to them using the Doctor's own voice. The Doctor is captured by the tribe but after surviving their endurance test is freed. As the Doctor & Leela journey to the stone Doctor's face, climbing through it's mouth, Xoanon sends monsters to attack the tribe. 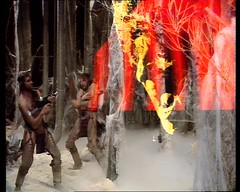 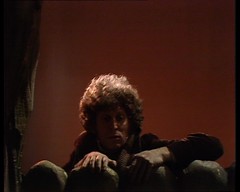 DOCTOR: I like the hat. Very fetching.
LEELA: That was the Hand of Xoanon.
DOCTOR: That was an armoured space glove, or what was left of one.

And I'm sorry that cricket glove on Neeva's helmet is just silly. By comparison to that the Spacesuit helmet is positively sane! 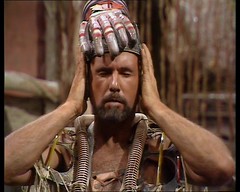 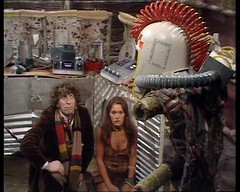 But they, like what's revealed to be medical equipment in Neeva's room, are hints as to the Tribe's origin:

DOCTOR: You know, we're very lucky they carried these things. Let's hope we can profit from the misfortunes of those travellers.
LEELA: I don't understand.
DOCTOR: I mean the planetary survey teams. That's where your tribe got its name from. Sevateem, survey team. The question is, were you here before them?
CALEB: Are we their captors or their children?
DOCTOR: You catch on quickly. Certainly they never returned to base.

The Doctor uses the word "Flapdoodle" during this episode: No Tom's not making words up to embroider the script, it's a Victorian expression meaning rubbish, foolish talk or nonsense.

DOCTOR: So that's a Horda. Well, it doesn't look to formidable. What do I do, fight it or eat it?
CALEB: They'll strike at anything that moves, except each other. Ten of these can strip the flesh from a man's arm almost before he can cry out.
DOCTOR: I take it there are more than ten in there.
ANDOR: The pit is full of them.
DOCTOR: Ah.

The Horda don't look too bad but they do make me think of an organic Cybermat! 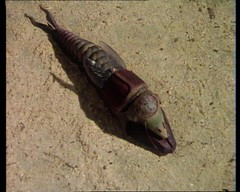 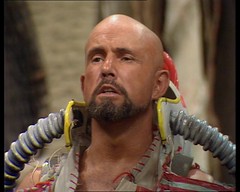 Playing the Sevateem's priest, Neeva, is David Garfield who was previously Von Weich in The War Games. He looks nothing like his earlier roll here, save for the bald head, resembling more the present day comedian Andy Parsons. Before he appeared in Doctor Who he was in The Prisoner's first episode Arrival as a Hospital Attendant.

The actor playing Calib, one of the Sevateem, was also in the the War Games: in that story Leslie Schofield played Leroy, an American Civil War Soldier. Schofield is probably best known for playing Chief Bast, the imperial officer in Star Wars who recommends the evacuation of the Death Star. His most famous role in a long television career is probably as Jeff Healey in Eastenders from 1997-2000. His time on the show overlapped with Louise Jameson's and they departed the series in the same episode on 3rd August 2000. His credits prior to Doctor Who include the surviving Out of the Unknown fourth seasons story Deathday where he plays Det. Sgt. Roberts. This story was adapted by Doctor Who's Brian Hayles, the creator of the Ice Warriors and can be found on the DVD set. He'd been in Doomwatch: Say Knife, Fat Man as Harry, which is a missing episode of that series, and The Sweeney: Country Boy as Ian Ross. Following this story he becomes the third member of this story's cast to appear in Blake's 7: Space Fall where he plays Sub-Commander Raiker. 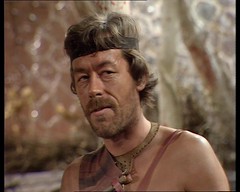 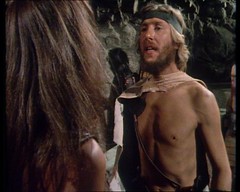 I think the tribesman on the right is Brett Forrest, given that he's credited and the Tribesman has dialogue. He too was in Blake's 7: Space Fall where he played Krell. Sure enough Space Fall is directed by this story's Pennant Roberts and he's reusing actors he's familiar with from here.

Onto the group shot photo bellow: I'm pretty sure that's Max Faulkner as a tribesman (IMDB says Guard) to the left of this photo. He'd previously been a UNIT Soldier in The Ambassadors of Death, an Exxilon in Death to the Daleks, a Miner in The Monster of Peladon, the Second Guard Captain in Planet of the Spiders, a Thal Guard in Genesis of the Daleks, a Crew Member in Planet of Evil and was last seen as Corporal Adam in Android Invasion. He'll be back as a Rebel in The Sun Makers and Nesbin in The Invasion of Time.

To the right of the same photo is Peter Roy, previously a Greek Soldier in The Myth Makers, an Extra (soldier?) in The Highlanders episode 1, an Airport Police Sergeant in The Faceless Ones episode 1, a UNIT / Bunker Man in The Invasion episode 1, a Guard in The Seeds of Death episode one, a Space Guard in The Space Pirates episode 1, an uncredited extra in Doctor Who and the Silurians episode 6, Technic Obarl in The Hand of Fear part one, a Guard in The Face of Evil part one, an Extra in The Sun Makers part one, a Gallifreyan Guard in The Invasion of Time part one, a Gracht Guard in The Androids of Tara part one, a Guard in The Armageddon Factor part one, a Policeman in Logopolis part one, an Ambulance Man in Castrovalva part one, a Man in Market in Snakedance part one and a Walk on in Resurrection of the Daleks part one, He's got two Doomwatch to his name as a man in Project Sahara and Flood, and a number of Blake's 7 as a Citizen / Prisoner in The Way Back, a Prisoner in Space Fall, an Alta Guard in Redemption, an Albian Rebel in Countdown and a Federation Trooper / Rebel in Rumours of Death plus an appearance as the Limousine Chauffeur in the second TV episode of The Hitchhiker's Guide to the Galaxy. Like Leslie Schofield, he too has a Star Wars role appearing in Return of the Jedi playing Major Olander Brit. 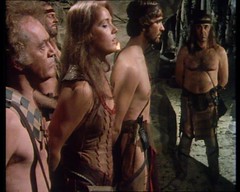 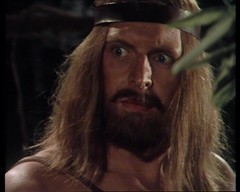 I'm pretty sure that's Mike Mungarvan as a Guard/Tribesman on the right having compared the photo to others online. He'd been a Mutt in The Mutants and would return as an Outsider/Outcast Time Lord in The Invasion of Time, a Druid in The Stones of Blood, a Dalek Operator in Destiny of the Daleks, a Plain Clothes Detective in Louvre in City of Death, an Arglin / Pangol Image in The Leisure Hive, a Citizen in Full Circle, Kilroy in Warriors' Gate, a Kinda Hostage in Kinda, Ranulf's Knight in The King's Demons, a Soldier in Resurrection of the Daleks, a Jacondan in The Twin Dilemma, an Extra and Duty Officer in The Trial of a Time Lord, a Lakertyan / Tetrap / Genius in Time and the Rani and a Poilceman in Silver Nemesis. He's been in Blake's 7 too as a Prisoner in The Way Back and Space Fall, the fifth cast member of this story to appear there, an Alta Guard in Redemption, a Customer / Gambler in Gambit, a Helot in Traitor and a Rebel Technician / Federation Trooper in Blake, making him one of the, if I recall correctly, four actors to appear in both the first and last episodes of the series.