"I am the virus of the Nucleus of the Swarm!"

The cloned Doctor & Leela make for the Doctor's brain. K-9 is controlled by the virus and stuns Leela, allowing Lowe & his virus controlled medics enter the ward and take control of Marius. Marius clones Lowe, shrinks the clone and injects him into the Doctor too where he pursues the Doctor & Leela. The Doctor confronts the virus nucleus in the Doctor's brain, while Leela protects them from the pursuing Lowe clone which is consumed by antibodies. As the clones expire the Nucleus escapes through the Doctor's tear duct and is increased to human size by Marius. 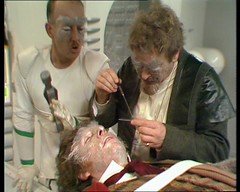 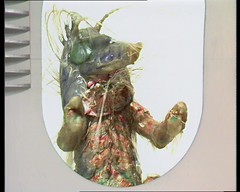 I can see the conversation now: Robert Holmes says to Bob Baker & Dave Martin "Let's do a homage to Fantastic Voyage!" which is what we get here.

The reason for the clones becomes obvious here in order to have the Doctor wandering round his own body. Why not get someone else infected so the real Doctor could be shrunk down and injected into someone else's body? 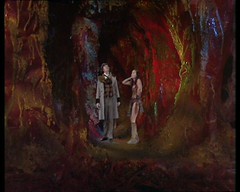 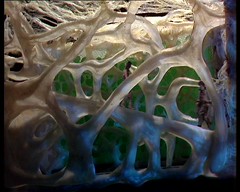 In many ways it's similar to Deadly Assassin 3: while the Doctor himself is lying prone take a duplicate of the Doctor, stick him in an unusual environment and throw some threats at him. Unfortunately what they're trying to do needs a few more pounds thrown at it: some not too brilliant sets and far too much dodgy CSO. 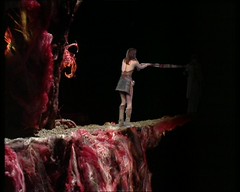 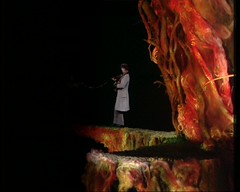 The results here didn't put them off too much so CSO providing the scenery will make a return later in the series and they don't do quite as well then!

Nowadays the technique of CSOing sets in is quite commonly used so in many ways his and Underworld are somewhat ahead of their time!

While we're on the subject of dodgy CSO.... Look at how the picture of Lowe on the screen shifts as the camera position for the main set adjust slightly! 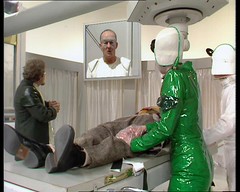 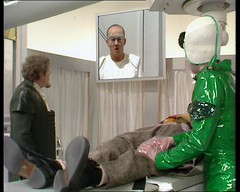 We will turn our attention and both barrels on the Nucleus next episode!

When this story was released on DVD there was a disc fault at the end of this episode, which necessitated a recall & replacement. Anyone who had to return their copy to 2 Entertain was compensated with a free copy of The Hand of Fear on DVD.

Due to the problems with the previously broadcast story, The Horror of Fang Rock, this story was made first, although it was broadcast second. Following Fang Rock the fourth story, The Sunmakers, was recorded and then the third, The Image of the Fendahl, with the final two stories , Underworld & Invasion of Time, being made in the order they were broadcast.