462 Image of the Fendahl: Part One

"You must have been sent by Providence!"
"No, I was sent by the Council to cut the verges."

A research team works on an incredibly ancient skull, older than humanity itself. As they subject it to tests it starts to glow. In nearby woods a hiker encounters a creature in nearby woods which kills him as one of the scientists, Thea Ransome, collapses. The Tardis finds itself dragged off course by a time scan in operation and when the Doctor traces the source to Earth he decides to investigate. The hiker's body is found by the research team who's head, Dr. Fendelman, summons a security team from London and orders Stael to perform an autopsy on the rapidly decomposing body, but no cause of death can be found, bar an odd blister on the neck. Leela & The Doctor encounter local Ted Moss who fills them in on the research establishment. Adam Colby & Thea Ransome object to the security restrictions placed on them and Adam takes the matter up with Dr. Fendelman, he explains his instrumentation can allow him to see into the past. Thea goes to look at the equipment and as she adjusts in the skull begins to glow. Outside the Doctor & Leela are attempting to gain access to the house the research team is based in. They are separated in the grounds: Leela enters the house and is shot at while outside the Doctor remains rooted to the spot as something advances on him. 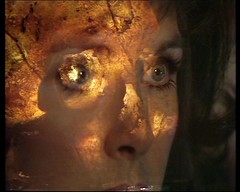 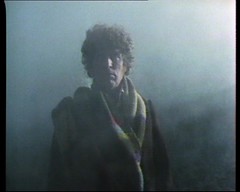 Lots of dark woods and glowing skulls with people taking the law into their own hands plus a mysterious force diverting the Tardis off track. Can't really go wrong with that can you? 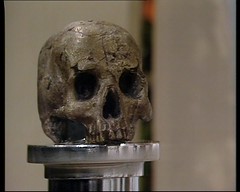 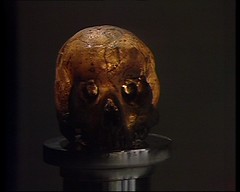 The only fly in the ointment is that, for the second story in a row, we have a professor with a slightly dodgy foreign accent! 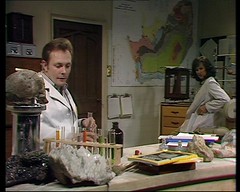 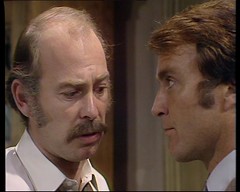 This becomes obvious when Colby makes a gruesome discovery in the grounds.

COLBY: There's a corpse by the wood!
FENDELMAN: What sort of corpse?
COLBY: A dead one. What other sort is there?
FENDELMAN: Male or female?
COLBY: Oh, male.
THEA: Do we know him?
COLBY: I never saw him before.
FENDELMAN: How did he die? Are there signs of violence?
COLBY: Well, not exactly. By the look of him, he didn't die easily.
STAEL: It is never easy to die.
COLBY: Well, thank you, Max. I'm going to call the police.
FENDELMAN: No, a moment, a moment. No, we must consider.
COLBY: What's to consider? There's a body out there. We can't just leave it. Or are you breeding vultures in that secret lab of yours, hmm?
FENDELMAN: This is no time for discourtesy, Adam.
COLBY: I'm sorry. It was a shock. He looks terrible. He must have been terrified when he died.
FENDELMAN: Adam, Adam, just think for a moment. These woods, they are supposed to be haunted. Now can you imagine what would happen if there were news of a mysterious death in them?
THEA: Well, there'd be a certain amount of publicity.
FENDELMAN: Publicity? It would be a circus. They attract enough lunatics already without advertising for them.
COLBY: I don't see that we've much alternative.
FENDELMAN: Adam, Adam. Our work is at a critical stage. Your discovery could be one of the most important milestones in human development. Your work will fundamentally affect how man views himself. We cannot be interrupted at this moment of destiny.
COLBY: Yes, but
FENDELMAN: And besides, we wouldn't want your Nobel Prize to be jeopardised by an unfortunate coincidence, now would we?
THEA: What are you suggesting?
FENDELMAN: I'm not suggesting anything. Adam will recover and then he can show us the body. Then we will decide, eh? We could arrange for it to be found somewhere else.
THEA: But that's illegal!
FENDELMAN: A small deception only.
THEA: Adam, you can't possibly
COLBY: It wouldn't make much difference.
FENDELMAN: There, you see? We work something out, eh? Stael. Get on to London. Tell Hartman I want a security team here within two hours. Tell him I want the best men we have and I want them armed. Then I shall want you to do a post-mortem on that body. 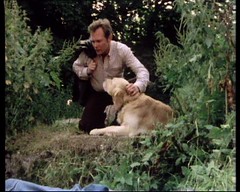 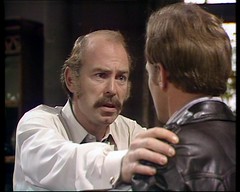 So what's going on and is so important that Fendelman is willing to subvert the law of the land?

The Post-Mortem reveals some interesting findings:

STAEL: I have completed the post-mortem.
FENDELMAN: And?
STAEL: I cannot find the exact cause of death. There is a small blister at the base of his skull, but that can't have killed him.
FENDELMAN: Natural causes, then.
STAEL: There is something strange.
FENDELMAN: Oh, what's that?
STAEL: The outward signs are that the man died quite recently. His watch is still working, he has a Thermos of tea in his pocket which is still hot, yesterday's newspaper. The mud on his boots is still
FENDELMAN: Yes, yes, yes, Stael, get on with it.
STAEL: The body is decomposing.
FENDELMAN: Already?
STAEL: It's falling apart as you watch.
FENDELMAN: The cause?
STAEL: I don't know, but it's as though all the energy has been removed. All the binding force has gone and all that remains is a husk.
FENDELMAN: Are the security team in place?
STAEL: Yes.
FENDELMAN: Good. You will dispose of the body, Stael, and nobody must know of this. Nobody at all.

Meanwhile, despite having the Tardis flight interrupted by the equipment Fendelman & Stael are using the Doctor seems in humorous mood engaging in banter with some cows....

DOCTOR: Good morning, ladies. Now, which one of you has the time scanner, hmm?
LEELA: This doesn't look like the place, Doctor.
DOCTOR: I did say more or less, though this does look rather less than more. You know, I don't think these cows know anything about the time scanner. Never mind. It's a beautiful day. The exercise will do us good. Come on. 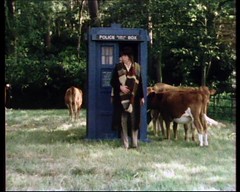 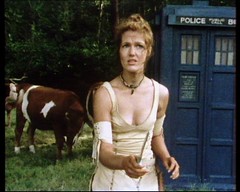 Criticising Leela's ancestors before distracting her....

DOCTOR: Your ancestors have a talent for self-destruction that borders on genius.
LEELA: Listen, Doctor, I do not like the way you keep talking about my ancestors.
DOCTOR: I like your new dress.
LEELA: Thank you.
DOCTOR: It's a pleasure.

.... and finally obtaining some vital information from a seemingly innocent passer by who Leela's decided to capture!

LEELA: Doctor? Doctor!
DOCTOR: Hmm?
LEELA: He came armed and silent.
DOCTOR: You must have been sent by Providence.
MOSS: No, I was sent by the Council to cut the verges.
LEELA: Your Council should choose its warriors more carefully. A child of the Sevateem could have taken you.
MOSS: Escaped from somewhere, hasn't she? If you're her doctor, you shouldn't let her wander around loose. She could do someone a damage.
LEELA: He was not hunting us?
DOCTOR: No. Would you like a jelly baby?
MOSS: You've both escaped from somewhere, haven't you.
DOCTOR: Frequently. What's the nearest village?
MOSS: Fetchborough, about a mile down that way.
DOCTOR: Fetchborough. Tell me about the ghosts.
MOSS: Don't know what you mean. Ain't nothing like that around here.
LEELA: He is lying.
DOCTOR: The strangers, then.
MOSS: What, Fendelman and that lot up at the Priory?
DOCTOR: Yes, Fendelman. Tell me about him.
MOSS: Well, he's foreign, isn't he. Calls hisself a scientist. They do say he's one of the richest men in the world. You wouldn't think so to look at him, scruffy devil. They say he made his money out of electronics, but that don't seem likely 'cos he ain't Japanese.
DOCTOR: Japanese?
MOSS: No. His people dig up bodies.
DOCTOR: They do? Splendid.
LEELA: Grave robbers.
DOCTOR: Or archaeologists. Where is this Priory?
MOSS: Yon side of village.
DOCTOR: And it's haunted, of course.
MOSS: Oh aye, but it's the wood more than the
DOCTOR: Shush. Don't you worry. What's your name?
MOSS: Ted Moss.
DOCTOR: Ted Moss? Hmm. Don't you worry, Mister Moss. We won't tell a soul, living or dead. Come on, Leela. 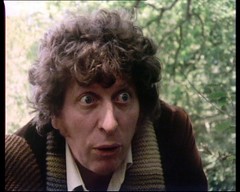 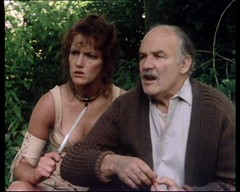 Leela's violent tendencies come in for some more criticism later

DOCTOR: What is it?
LEELA: There's a guard. I shall kill him.
DOCTOR: No.
LEELA: Why not?
DOCTOR: You'll upset the dog. Listen, Leela, you simply must stop attacking people.
LEELA: Why?
DOCTOR: Because you'll get us into trouble.
LEELA: Do not worry, Doctor. I shall protect you.
DOCTOR: What? You'll protect me? Come on, we'll circle round the back. Come on!

My memory of past watches of this story is there's some stuff later on that doesn't sit too well with me but I enjoyed this episode immensely!

Even when I can't find an actor has been in Doctor Who before or since it's usually easy to find something about them. For example Security Team leader David Mitchell is played by Derek Martin who goes on to be Charlie Slater in Eastenders. He's been a Doctor Who supporting artist for many years appearing as an Extra in Inferno, a Parisian in Rue des Fosses St. Germain in The Massacre, a Soldier in The Web of Fear, Spearhead from Space, Inferno & Claws of Axos, a Thug in The Ambassadors of Death and a Prisoner in The Mind of Evil. He was in Out of the Unknown as a Guard in The Counterfeit Man which you can see in the Out of the Unknown DVD Set. He's also in The Sweeney as Spooner in Messenger of the Gods and The Professionals as Renshaw in Not a Very Civil Civil Servant. 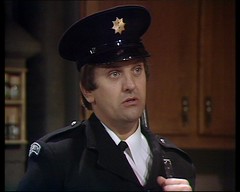 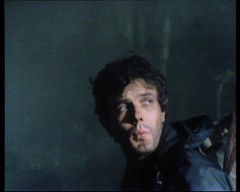 But every so often you see an odd claim on Wikipedia that you can't be 100% sure is true. We have the hiker who appears in this episode, played by actor Graham Simpson, who's also in the Blake's 7 episode Weapon (with the same writer & director as this one). Wikipedia believes that this Graham Simpson later became a businessman and went on to chair Watford football club! I've done some research and I'm not 100% convinced the Wikipedia entry is right but neither am I convinced that it's definitely wrong.

Adam Colby is played by Edward Arthur. The most obvious thing I can see on his CV that I've seen is Morons from Outer Space where he plays a Television Interviewer. 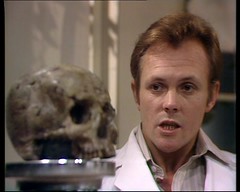 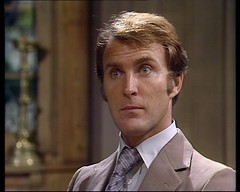 Maximilian Stael is played by Scott Fredericks who previously was Boaz in Day of the Daleks. Like the Hiker he also appears in the Blake's 7 episode Weapon.

Location filming for this story once again takes place at Stargrove Manor, then the home of Mick Jagger. It had been used two years previously as the locations for Pyramids of Mars. 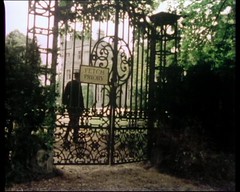 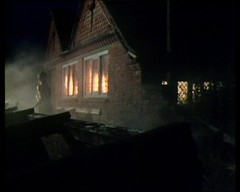