458 The Invisible Enemy: Part One

As a shuttle ferries a relief crew to the base on Titan it passes through an unidentified organism which infects the crew. Arriving on Titan they kill three of the crew. The station supervisor, Lowe, sees what is happening and sends a mayday call which the Tardis receives. The Tardis passes through the same organism with a strange glow enveloping the Doctor. He too has been infected by the virus and passes out. Leela however proves immune. The Tardis lands on Titan, bearing the Doctor who is to be the host for the virus. The Doctor recovers conciousness , but Leela is worried by his odd behaviour. Lowe confronts the relief crew, killing one of them, and is chased away. The Doctor & Leela find the body, and then the remaining two members of the relief crew who are preparing a hive for the nucleus. The Virus orders Leela destroyed and the controlled Doctor takes a blaster to kill her. Leela finds & rescues Lowe. The Doctor tries to resist the virus. Leela kills one of the relief crew but as he dies he infects Lowe. 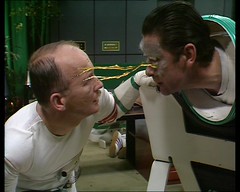 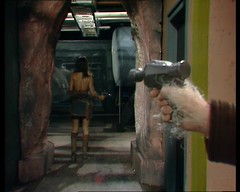 As Lowe & Leela try to escape a controlled Doctor advances on Leela bearing his gun .....

The first thing I thought as I saw this was "Have I switched on an episode of Blakes' 7 by mistake?". Of course the BBC's other science fiction show was still a few months in the future when this episode first aired but the effects and sound of the episode are so similar. In particularly the revolving rocks moving towards the screen is reminding me of something Blake's 7. 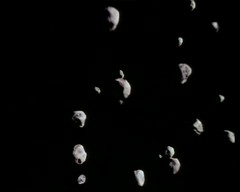 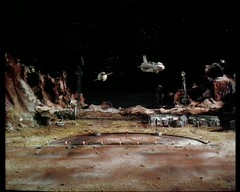 There's also more than a little bit of Space 1999 here with the shots of the shuttle moving diagonally over the planet and landing on a pad that descends into the ground! 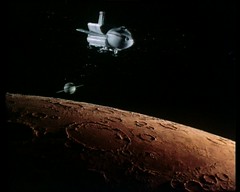 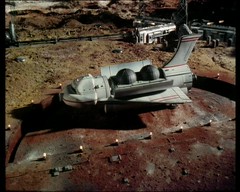 You know what's always annoyed me about the the shuttles in this story: why have they got their bay doors open? It just looks odd!

The shuttles have always reminded me of the ships in Frontier in Space, but I've checked they are different and that's beyond having a different nose on them!

But there are some reused elements here: First we have one of our old friends the UFO control panels: 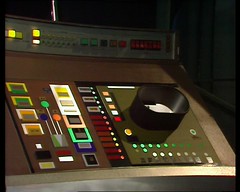 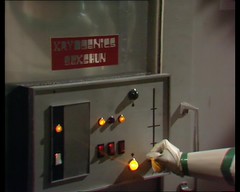 Then there's this control panel that's previously been in Ark in Space and Planet of Evil and, prior to both of those, the James Bond film Live and Let Die.

The biggest thing this episode is the return to a more traditional style console room:

The wood panelled console room, which made it's début in Masque of Mandragora and was in use in Leela's first few stories had warped in storage necessitating a replacement and the designer opted for the more traditional white. 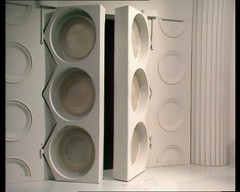 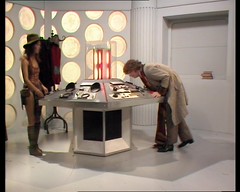 It's an interesting moment for me seeing it on screen because this is the control room I was used to when I was growing up and watching Doctor Who, complete with the two part sliding cover for the large monitor screen on one wall. We're getting very close now to the point where there's episodes I saw as a child, in fact the first complete story I ever saw is just one season away. Unfortunately with the new console room comes a very dodgy motion on the time rotor which visibly wobbles from side to side!

As an episode this is competent enough and the idea of the Doctor controlled by an alien force is a good one that I don't think we've seen before. There's a lovely speech by the Doctor at the start which neatly foreshadows what's going on:

LEELA: Have we materialised?
DOCTOR: Yes.
LEELA: Where?
DOCTOR: Solar system, between Jupiter and Saturn. About five thousand AD. Five thousand AD? We're still in the time of your ancestors.
LEELA: Ancestors?
DOCTOR: Yes. That was the year of the great breakout.
LEELA: The great what?
DOCTOR: Mmm. When your forefathers went leapfrogging across the solar system on their way to the stars. Asteroid belt's probably teeming with them now. New frontiersmen, pioneers waiting to spread across the galaxy like a tidal wave. Or a disease.
LEELA: Why disease? I thought you liked humanity?
DOCTOR: Oh, I do, I do. Some of my best friends are humans. When they get together in great numbers, other lifeforms sometimes suffer.

We've seen two of the relief crew before: Brian Grellis plays Safran, the one who survives beyond this episode, and he was Sheprah in Revenge of the Cybermen and will be the Megaphone Man in Snakedance. Like Colin Douglas who was Reuben in Horror of Fang Rock, Grellis appeared in God's Wonderful Railway playing Spider in The Permanent Way Parts 1 & 2. Grellis has an appearance in Out of the Unknown to his name too, playing the Sergeant in the missing third season episode Something in the Cellar and also was in Survivors playing Les Grice in Parasites.

Silvey is played by Jay Neill who was previously a Pikeman in The Masque of Mandragora and returns as Guard Klimt in Underworld. He was a regular supporting artist on Doomwatch appearing in Project Sahara as a Man, The Battery People as Laing, By the Pricking of My Thumbs... as a Man, Flight Into Yesterday as a Young Man and Flood as a Man. All bar the last episode exist and can be seen as part of The Doomwatch DVD 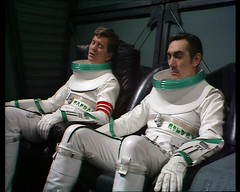 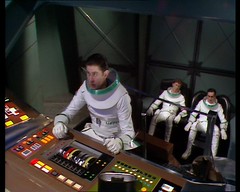 The commander of the crew, Meeker, is played by Edmund Pegge who while not being in Doctor Who before has appeared in Barry Letts & Terrance Dicks' Moonbase 3 as Macadam in Outsiders and will appear in the first episode of the David Maloney produced Day of the Triffids as Walter.

By far the most famous face in this episode is our old friend Michael Sheard, back for his fourth Doctor Who guest role as Station Supervisor Lowe. He's been in The Ark as Rhos, The Mind of Evil as Dr. Roland Summers & Pyramids of Mars as Laurence Scarman and will return in Castrovalva as Mergrave and finally, with more than a little bit of an in-joke nod to his role as teacher Mr Bronson in Grange Hill, in Remembrance of the Daleks as the Headmaster. If you don't know who from any of these then you'll have seen him as Admiral Ozzel in The Empire Strikes Back and Hitler in Indiana Jones & The Last Crusade, one of five times that he plays the Nazi dictator. 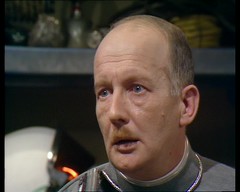 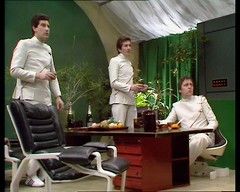 To the right of his quickly massacred Titan Base crew I spot another old friend, Harry 'aitch Fielder. Before this story is done several of Doctor Who's other "Supporting Artists" will have put in an appearance! The chap in the middle, who speaks and thus gets a credit, is Anthony Rowlands who won't trouble us further. But the man on the left is a bit of a poser as there's nobody listed on IMDB it could be. Fortunately m'learned colleague Mr Brunt came to my assistance identifying him as Stuart Myers. There's no IMDB credit for this story for him but amusingly he seems to have been in an episode of Microbes and Men called The Invisible Enemy in 1974 as a Student! IMDB does think he was in Doctor Who and the Silurians as a Technician and Frontier in Space as a Draconian but I'm told he's been in several others: UNIT Soldier in Doctor Who and the Silurians 6, Plague Victim in Doctor Who and the Silurians 6, Technician in Doctor Who and the Silurians 7, UNIT Soldier in The Ambassadors of Death 1 & 7, Rolling Axon Glob in The Claws of Axos 2, Draconian in Frontier in Space, Photographer in Invasion of the Dinosaurs 1, Pangol Clone in The Leisure Hive 4, Foster Z in The Keeper of Traken 1-3, Cricketer in Black Orchid 1, Buccaneer Officer in Enlightenment 3-4, Citizen/Unbeliever in Planet of Fire 1-4, Resistance Fighter/Alphan in The Trial of a Time Lord 6-7 and Customer/Mercenary in Dragonfire 1, 3 He also appears in Blake's 7 Space Fall as a crewman, alongside Aitch, and was in Moonbase 3 as a Technician in Outsiders, alongside Edmund Pegge who plays Meeker here, and reappears in the same role in Castor & Pollux.