"Now the time for spawning is very close!"

With the Nucleus removed from his brain the Doctor returns to normal. The Nucleus proclaims that the age of the virus has begun and leaves for Titan to spawn. Leela frees the Doctor, and he works out that cells absorbed from the Leela clone have granted him immunity. Duplicating the immunity they free Marius from the Virus' control and they leave in the Tardis with K-9 bound for Titan. Lowe catches The Doctor trying to throw the immunity serum into the Virus's hatching chamber but but K-9 shoots Lowe causing him to fall into the chamber. The Doctor destroys the Titan base to prevent the virus from spreading further by setting a booby trap and he, Leela & K-9 escape in the Tardis to the Bi-Al foundation. Professor Marius tells the Doctor that he needs to leave soon for Earth and gives K-9 to the Doctor & Leela. 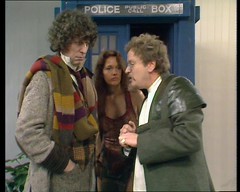 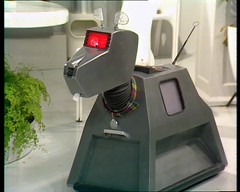 Oh dear. This episode is ruined by the monster: The Virus Nucleus when grown to full size is a giant prawn and looks ridiculous. The poor man inside the suit is regular Dalek operator John Scott Martin and I'm afraid it's not his finest hour. What it reminds me of, well apart from a prawn, is the Argond Dragon costumes worn in The Adventure Game, an effect compounded by the sets of the Bi Al foundation also reminding me of the Arg sets from the same program! 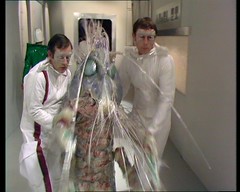 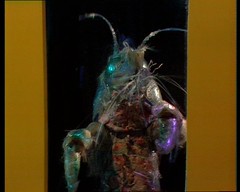 And as the Nucleus is led through the corridors it's crying out "Faster, we must go faster, the time for spawning is very close" and sounds just like an expectant mother being rushed to hospital. No, this is bad cheap comedy. And talking of cheap what about the special effect that destroys the Titan base? The initial explosion, after the model has been removed from shot, is one of the worst ever a complete damp squid. It should be the big one that follows a few moments later. 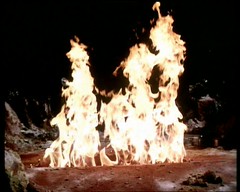 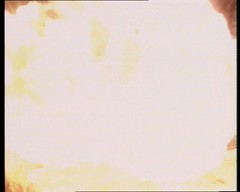 That's before we even consider that the explosion was Leela's idea much earlier in the episode:

LEELA: How much longer?
DOCTOR: We can't rush these things. They're breeding as fast as they can. K9 will tell us when they've got the most powerful strain.
LEELA: Doctor, why don't we just blow up Titan? Nucleus, breeding tanks, everything.
DOCTOR: That's your answer to everything, isn't it, knock it on the head.
LEELA: Effective, isn't it? Smash it once and for all. Well?
DOCTOR: With what? This is a hospital, not an arsenal.

There's a lot of very dangerous things in hospitals, I'm sure they could have found something there to save them, and us, the time and trouble!

At the end of the episode K-9 departs with the Doctor & Leela. It feels a little bit sudden but it is a late addition to the storyline:

MARIUS: Goodbye, Doctor, and thank you for everything you've done for us.
DOCTOR: It's been a pleasure, Professor. It's been a pleasure. Do you know that without K9 I think we'd have been part of the Swarm by now.
LEELA: We'd never have managed with out him. Her. It. Sorry, K9.
K9: Apologies are not necessary, but thank you, mistress.
MARIUS: I think K9 has taken to you. Oh. Actually, I have to return to Earth shortly and you could do me a great favour if
DOCTOR: What?
LEELA: Take K9 with us?
MARIUS: Yes.
DOCTOR: No.
LEELA: Yes! Oh, please, Doctor, please, please, let's take him.
MARIUS: K9 seems to have made up his own mind. I only hope he's Tardis trained.

But the excruciating "Tardis trained" joke to close with? Ugh. I'm not watching an awful US show that has to close on a joke every week!

There's some good concepts in this story: a controlled Doctor, a virus achieving life size. Unfortunately they reach too far in presenting inside the Doctor's body in episode three and then episode 4 looks like there's no money left at all. Frederick Jaeger's comedy mad professor performance doesn't help either! It's director Derrick Goodwin's sole Doctor Who job and the only science fiction I can spot in a career mainly spent directing & producing comedy.

Invisible Enemy was repeated the next summer on Thursdays from 13 July to 3 August at 7pm. It was novelised by Terrance Dicks and released on video in September 2002. In September 2008 it was released on DVD in Doctor Who: K9 Tales Box Set with K9 and Company. The initial pressing of the DVD were faulty (see episode 3) and led to a recall & replacement by 2 Entertain which gave everyone who sent off for one a free copy of The Hand of Fear on DVD!