"Interfering with the working of Logopolis. The most dangerous crime in the universe!"

The Logopolitans try to restore the shrunken Tardis. Sonic projectors are used to create a zone of stability round the Tardis. Adric and the Monitor trace the error and discover the Master's handywork in the form of several shrunken Logopolitans. Nyssa encounters the Master, mistaking him for her Father, and he gives her a bracelet. The corrected code restores the Tardis to it's full form. The Doctor tells the Monitor the Master is here killing people and tells Tegan her aunt is dead. Nyssa's bracelet starts squeezing her arm and hurting her. The Master seizes the sonic projectors and uses them to silence Logopolis. The Doctor and his friends meet the Watcher in the street, and the Doctor prepares for the worst. He confronts the Master, who uses the bracelet to control Nyssa as the Monitor protests at the Master's actions. Without the chanting the structure of Logopolis starts to break down as does Nyssa's bracelet. The Logopolitan's Block Transfer Computations have been maintaining the universe, which as a closed system, long ago passed the point of total collapse. The Block Transfer Computations, broadcast through the replica of the Pharos Project, have opened holes into other universes to maintain the system, the CVEs that the Tardis passed through. Without the computations the voids are closing and entropy is increasing destroying the Universe. The Doctor proposes an alliance with the Master to save the Universe. The Tardis follows them into the streets and the Doctor sends his three companions inside before sealing the deal with the Master by shaking his hand. 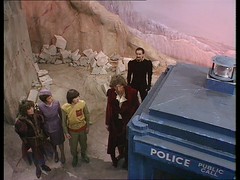 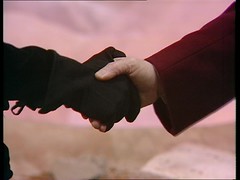 This episode isn't bad for the companions as everyone gets something to do in it albeit at the cost of removing the Doctor from the majority of the action for the first half of the episode.

I could live without Tegan's rant about the Logopolitan's working conditions though:

TEGAN: Well, while he's sorting that out, perhaps you wouldn't mind explaining something to me: Back home in Brisbane, we call that a sweatshop. They don't smile, they don't talk to anybody.
MONITOR: Their language is the language of numbers. And they have no need to smile.
TEGAN: No need to smile?
MONITOR: We are a people driven not by individual need but by mathematical necessity. The language of the numbers is as much as we need. Now, it is important that we do not disturb them.
TEGAN: But if they don't talk to each other.

I do wonder why does the corrected code merely restore the Tardis to it's rightful size? Shouldn't the corrected version also have mended the chameleon circuit?

In amongst this there's some very personal moment for the two newest additions to the Tardis crew. First Tegan learns of the death of her Aunt:

DOCTOR: Where are the others?
TEGAN: Adric and Nyssa went to look for the Master.
DOCTOR: What? They should know better than that. There've been enough unnecessary deaths as it is.
TEGAN: What deaths?
MONITOR: The murder of innocent Logopolitans.
DOCTOR: And the murder of innocent Earth people.
TEGAN: Earth people?
DOCTOR: Yes.
TEGAN: Aunty Vanessa?
DOCTOR: Yes. I'm so sorry, Tegan. I'm so sorry. 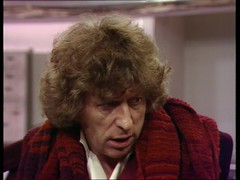 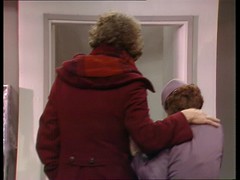 Then Nyssa finds her missing Father, but finds him different to what she remembers:

NYSSA: But what is this mission of yours, father? You're so changed by it. You look younger, but so cold.
MASTER: Logopolis is a cold place. A cold, high place overlooking the universe. It holds a single great secret, Nyssa, which you and I must discover together.
NYSSA: And the Doctor. The Doctor can help us.
MASTER: Oh yes, the Doctor can certainly help us. You must return to him.
NYSSA: Father, I don't want to be parted from you.
MASTER: No need to, my dear. Here, wear this. It will keep us in mind of one another. Remember to tell no one that you've seen me, yet. 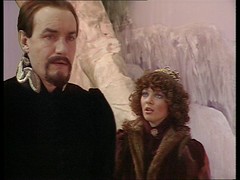 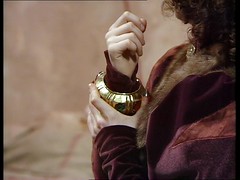 The full horror of what has happened to Tremas quickly becomes apparent:

NYSSA: Father!
DOCTOR: That's not your father. Tremas is dead, murdered by him, the Master.
MASTER: Nyssa.
NYSSA: You killed my father?
(The Master takes Nyssa to one side.)
MASTER: But his body remains useful. Without it I could not have conquered Logopolis.

We saw last episode the massive Radio Telescope incongruously standing in the middle of Logopolis: now we start asking about it: 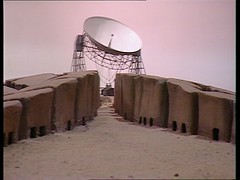 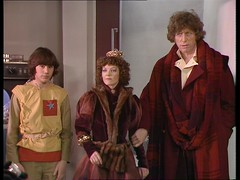 However as the episode goes on the stakes are upped dramatically

MONITOR: Sabotage.
ADRIC: Murder.
MONITOR: Interfering with the working of Logopolis. The most dangerous crime in the universe! 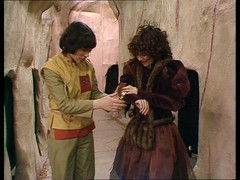 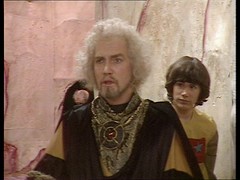 The Master is turning out to be pretty keen on shrinking things this story and episode. Before Logopolis his only shrunk victims were Goodge in Terror of the Autons and the Cameraman in Deadly Assassin. This story he's killed by shrinking the Policeman & Aunt Vanessa in episode one, at least one Logopolitan in episode 2 to disrupt the calculations for The Doctor and several here! He's becoming a lot more single minded in his method of dispatch!

It might not have been a great thing to do from a story point of view because it invites the viewer to ask if everyone else shrunk dies, how does the Doctor survive? I suppose that he was inside the Tardis counts as a decent enough excuse?

It's obvious The Master doesn't know what Logopolis was doing from his dialogue in this episode:

MONITOR: Turn that machine off. You have no idea what you're doing.
MASTER: Merely emitting a sound-cancelling wave, Monitor. Logopolis is now temporarily suspended. The silence gives us an opportunity to discuss its future.
MONITOR: There will be no future. You are eroding structure, generating entropy.
MASTER: An absurd assertion. I know the power of this device down to the last decibel.
MONITOR: But you do not know Logopolis!

So what purpose of his is served by turning the sonic projectors outwards on Logopolis? The Doctor's already escaped the trap here. Yes I could maybe see him doing it out of spite "you've saved the Doctor, I'll shut you up good and proper" but there's usually some method behind his madness, what did HE hope to gain by doing it?

Of course now we find out what Logopolis was up to, and The Monitor has a couple of bombshells for us:

MONITOR: From this point, the unravelling will spread out until the whole universe is reduced to nothing.
MASTER: So it's true.
MONITOR: Yes, Doctor, you were right. Our numbers were holding the fabric of the universe together.
NYSSA: But how? Surely in a closed system like the universe, entropy is bound to increase?
MONITOR: Certainly. The universe long ago passed the point of total collapse.
DOCTOR: Passed the point?
MONITOR: If it had remained closed. But we have the means to postpone the time.
MASTER: So that's why you adapted the Pharos Project.
MONITOR: Yes. We opened the system by creating voids into other universes.
ADRIC: The Charged Vacuum Emboitments!
DOCTOR: We passed through one of your voids, Monitor.
MONITOR: It all depended on our continued endeavours. A temporary solution while the advanced research unit worked on a more permanent plan. But nothing will come of that now. Our labours wasted. The voids will be closing.


For those who've been watching this season there's some nice joined up story telling going on here: the hole which the Tardis fell through into E-Space was artificial, opened by Logopolis to help postpone the death of the universe!

TEGAN: This'll teach you to meddle in things you don't understand.
MONITOR: We are beyond recriminations now. Beyond everything.
DOCTOR: Not quite.
DOCTOR: We must pool our resources.
NYSSA: The creature that killed my father
DOCTOR: I can't choose the company I keep!
MASTER: An alliance with you, Doctor?
DOCTOR: In the circumstances, yes.
MASTER: If we do cooperate, there'll be no question of you ever returning to Gallifrey.
DOCTOR: If we don't cooperate, there'll be no question of Gallifrey.
TEGAN: Doctor, what are you doing?
DOCTOR: Please. Shush. As Time Lords, you and I have special responsibilities.
MASTER: Together, then.
NYSSA: But Doctor!
DOCTOR: I've never chosen my own company. Nyssa, it was you who contacted me and begged me to help you find your father. Tegan, it's your own curiosity that got you into this. And Adric, a stowaway.
TEGAN: The Tardis!
NYSSA: It's followed us from the Central Register.
ADRIC: But how can it get here when there's no one in it?
DOCTOR: Did I say there was no one in it?
NYSSA: It must be the man who brought be to Logopolis.
DOCTOR: I don't want any further argument. One, two, three of you into the Tardis, quickly. Go on.
ADRIC: Look, we want to help you.
DOCTOR: It's impossible. My friend in there will look after you. I'm collaborating with the Master. Now go on. Battle stations.
NYSSA: The man's a murderer!
ADRIC: Come on, Nyssa. He means it.
MASTER: Together?
DOCTOR: One last hope. 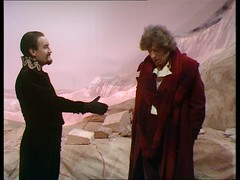 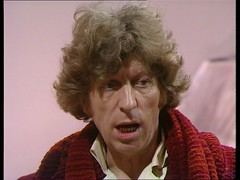 Christopher H. Bidmead's theme of Entropy, loss and decay comes to the surface here. It has been present all season even though Bidmead's understanding of Entropy isn't an exact match to the actual definition. But somehow big ideas and high stakes are wholly suited to the end of the Fourth Doctor's reign. Join us next week for Tom Baker's last episode as Doctor Who as we battle to save the universe and look back at the last seven years of Doctor Who.